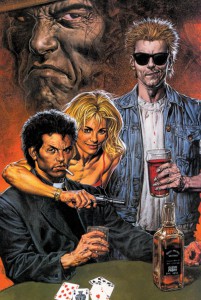 For years the owners of the rights to Preacher have been desperately trying to get the brand adapted in a live action format. An, oh so close, HBO series was scrapped and a proposed film trilogy has indefinitely been stuck in development hell. Those who have read the comics know that if one of these projects ever gets off the ground it is extremely unlikely that it will be a faithful adaptation and will more than likely suck.

The reasoning for this is because Preacher is some majorly controversial stuff.  Just about anything that anyone could ever have taken offense to gets at least a momentary recognition within the pages.  Incest, bestiality, gore, violence, foul language, cannibalism, rape, murder, sex (and that’s not even getting into the deep religious stuff) is all graphically depicted on page. There’s no way Preacher can be adapted and was likely only allowed to exist because censors do not have their eyes on comics like they did decades ago. Despite purposefully tackling any and all tabu’s, Garth Ennis did not make a smut mag. Instead he intelligently crafted a challenging story unlike anything that had ever been inked before. Injecting cleverly timed moments of humor and social commentary he is able to entertain his readers as often as he provokes them.

Preacher begins its story with the three lead characters sitting in a dinner booth. Jesse Custer, a small town Texas preacher, his ex-lover Tulip O’Hare and 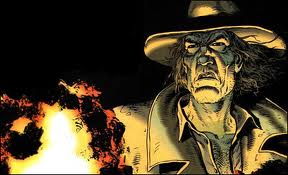 Cassidy (possible the series most engaging and mysterious character) recount the amazing events that have recently transpired. This foreshadows the entire series rather well considering the true joy of reading Preacher is the gradual reveal and discovery of all the events predating the timeline of the comics and the backstory of the characters. Its difficult to summarize Preacher without giving too much away but essentially God has abandoned heaven and the seed of an archangel and demon, known as Genesis, has fled to Earth and merged with Jesse Custer. This has given Jesse the greatest superpower of all-time “The Word of God”. Anything that Jesse says and any command given must be obeyed by anyone and everyone. Determined to hold God accountable for abandoning his kingdom Jesse goes on an odyssey to find the almighty along with Tulip and Cassidy. Panicked over God’s absence and Genesis’ escape, three angels release The Saint of Killers.  The S.O.K. is the biggest, baddest S.O.B. in existence, plucked straight out of a Sergio Leone western, and hunts down Jesse throughout the series.  In future volumes the true antogoist is revealed, Herr Starr, and this writer could script an entire essay on what a cool, comical and just downright entertaining character he is and the numerous unfortunate events that befall him. 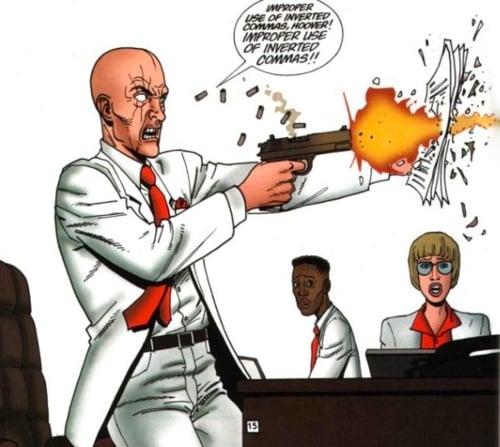 While its sick and twisted visuals are the hook it is the way that Ennis handles his interpretation of the Christian theology that ultimately lands the reader. Heaven is not the harmonious paradise it is often depicted to be. Instead it is full of bureaucratic corruption and characters seemingly plucked from a Tarantino production. With the literal absence of a supreme being, Ennis poses the question of whether or not mankind needs an intelligent creator and challenges the lines of right and wrong. Custer’s new acquisition, Genesis, was born from both good and evil and is always referred to as a “new idea”.  Religion typically resides in the world of black and white but Preacher ponders the possibility of living in the grey. A universe not divided from the good and the bad but a harmony of the two. Anyone who ever grew up in a religious household only to eventually question their faith in adulthood should absolutely seek out Preacher. It is a rare thing indeed to find a work of art that can entertain, disgust, challenge and broaden its reader like this Garth Ennis masterpiece can. 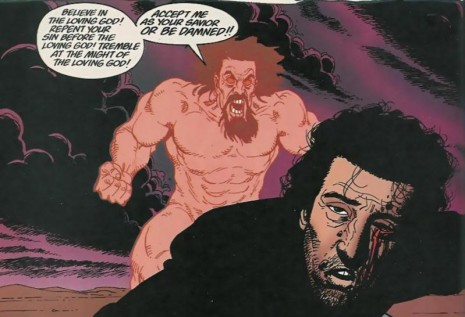 The entire Preacher series began in 1995 and concluded its run on July 2000, encompassing a total of 75 issues that contain one tremendously in-depth story. These issues have been released into a 9 volume set of paperbacks which flow tremendously well, serviceable as individual but connected adventures that never leave the reader on a cliffhanger. They deserve a spot on the must read list for all graphic novel enthusiasts.
0shares