Horror. The much maligned, hard partying, estranged uncle of cinema. Being the reasonably presentable professional that I am by day, it often shocks people that I, a man in his thirties of above-average intelligence devotes such a large portion of his free time mentally cataloguing some of the worst movies ever committed to celluloid and video tape. Be they actual bad movies by definition, which I make no secret of my love affair with, or movies that once you see them, you can never unsee them, for instance the recent French ‘pregnant woman in peril’ shocker, L’Interieur. The point I’m trying to make in such a roundabout way is that it’s easy to dismiss horror based entirely on its mainstream representatives and hordes of jackasses paying out the nose at horror cons for Misty Mundae’s autograph.

In spite of wave after wave of remakes from a studio system bankrupt of all creativity and harboring a deep contempt for the genre that makes them so much god damn money, not to mention a legion of fans who have enough fishnet and Insane Clown Posse shirts to ensure that they never wear the same outfit twice, horror is a very layered, complex and often challenging genre. And you don’t necessarily have to sit through Guy Maddin movies to find them. I blog often and have such a big mouth that I’ll evangelize the intellectual properties of horror movie x to just about anyone who will listen. As a matter of fact, it’s too late for you, you’re knee deep in said evangelism.

You don’t necessarily have to look far to find a horror movie that won’t insult your intelligence, unless you’re out for that sort of thing, which sadly, I sometimes am. I could spend time talking up the arthouse qualities of the extremely creepy Turkish vampire movie, Karanlik Sular, but it can be a bit difficult to track down (Onar Films has it) but you may not be into the great internet hunt for hidden treasures like I am. You may just want to find something that you can throw on your Netflix queue right now. To sate that desire, I recommend the following features. 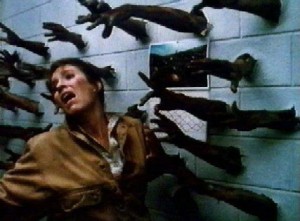 Day of the Dead
Director: George A. Romero
1985
These days, Romero is practically a household name and if you’re as sick of the persistent zombie wave dominating low-budget horror today as I am, you have this man to blame. Romero did zombies on tiny budgets and made it look easy but what set his indies apart from the dreck of the status quo was a signature quality of social examination in his movies. Beginning with 1968’s Night of the Living Dead, Romero weaved a subtext of social anxiety that is no stranger to the genre but had never been handled before with such grace and subtlety. By 1985, Romero had honed his craft to the point that the message was still there, but what, exactly, he was trying to point out by way of gory zombie movie became ambiguous. Day of the Dead is an examination of American culture circa 1985. Namely, the cultural argument between the right and the left. What many forget is how close we were to doomsday during the Reagan years and it’s no accident that the movie takes place during humanity’s last days. What could possibly be the last handful of survivors ironically living in a nuclear missile silo spend their time fighting with one another over each side’s proposed solution to their problem. Critics of the movie point out how talky Day is and they’re right. For a Romero zombie movie, following up the action-packed comic book of Dawn of the Dead (truth be told, Day follows Creepshow), features mostly people yelling at one another and very little time is spent shooting zombies but we’re talking about stimulating horror. Of Romero’s zombie movies, I find myself going back to this one time and time again. Not only is it the most interesting and thought provoking of the four movies to me (Diary of the Dead is reboot) it’s also the nastiest with the most explicit violence to grace a Romero zombie movie thus far. The bar has never been higher. 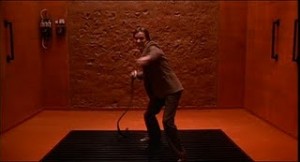 Videodrome
Director: David Cronenberg
1983
A good intellectual shocker needs to do one thing more than anything else. It needs to remain relevant year after year and Videodrome, though certainly dated, has a message about the media that matters now more than ever. Not only is Videodrome David Cronenberg’s finest moment it’s one of the sharpest explorations of fantasy, reality and the line where the two blur. Make no mistake, the movie is completely disgusting and extremely confusing, to boot, but both of these are deliberate and necessary elements. It features a solid dose of Cronenberg’s patented body horror but what you’re really supposed to be wondering is at what point does television begin dictating reality? The proliferation of cable in the early 80’s meant a huge wave of options in entertainment and today we have 100 times the options our parents had back then. We live saturated in media, particularly channels broadcasting fresh content 24 hours a day. Namely, news channels and it is evident that no matter the network, each one is spinning the news to become infotainment. It not only cheapens the information coming at you but it mutates the message and dumbs the news down by explaining everything to you. Though James Woods jams a videotape into the pulsating vagina in his abdomen and later shoots a man with a cancer bullet, Videodrome holds your head under the water while you take all of this in. It’s absolutely grotesque and obscure but a powerful movie that asks an awful lot of its viewer.

Let The Right One In
Director: Tomas Alfredson
2008
Not all the good horror came out in the 70’s and 80’s. As a matter of fact, one of the freshest, most stimulating horror flicks I caught in a very long time hit the world stage in ’08. Tomas Alfredson’s adaptation of the novel Let The Right One In was bathed in hype as the movie made the festival rounds and for good reason, it is one of the most challenging, troubling movies that I have ever seen. On the surface it looks like two things. It’s either a vampire movie or a very violent teen romance. Beneath the surface, though, is a complicated, deeply disturbing feature that doesn’t pack all the horror into a simple monster movie. There’s plenty of vampire attacks in this movie but the horror doesn’t end there. It wraps a bitter sweet love story in tragedy, isolation and suffering. It presents the questionable relationship between 12 year old vampire Eli and her caretaker Hakan and then asks you to consider Oskar’s role in all of this as the credits roll. Are they actually in love? Is she a manipulative animal? When will Oskar kill for the first time? It’s an uneasy flick that asks an awful lot of difficult questions. It is distinctly European and as such asks a lot more of the viewer than one of its American counterparts might. Let The Right One In is presently on the remake block because hey, everybody hates subtitles, right? Catch this one before American studios compromise everything that made the original Swedish version such a powerfully haunting movie.