From the pool party dive in Boogie Nights inspired by Mikhail Kalatozov’s I Am Cuba to the steering wheel scene in Hard Eight that so deftly recalls Alfred Hitchcock’s Saboteur, playing spot the reference with Paul Thomas Anderson is always fun. It is through these moments that we can fully appreciate the voracious depth at which one man is embroiled in his art; forever the immersed student despite his steady rise to master, yet with a constant, gleeful wish to share with us an unconditional love for the cinema – something that we can all identify with.

Of all Paul Thomas Anderson’s creations, one continues to standout as a jarring anomaly: that being Punch-Drunk Love, which does away with many of the recurring narrative themes (fathers and sons, abandonment, etc.) that can be traced throughout his work, and instead challenges the conventions of the romance genre – though, with an emphasis on loneliness that we’ve certainly seen before. One might be forgiven for assuming that this film, of all films, might be the worst possible choice when it comes to picking some kind of representative work: it is a colorful departure from his typically rigorous approach. But then, this is precisely why it flourishes in such a manner – almost as though, free of the burden of any great social themes or similar impositions, we are instead shown the director’s more playful side and with it, many more of the films he holds dear.

Punch-Drunk Love positively abounds with filmic references, with some more subtle than others. In a scene that could be described as eponymous, Barry Egan (Adam Sandler) is seen punching his office wall before slumping over a little wooden piano in desperation. The violent collision has brought up bright red marks on each knuckle, but only the fleetest of observers will note their curious spelling of the word “love”, recalling preacher Harry Powell’s famous tattoo in Charles Laughton’s The Night of the Hunter. In a more direct homage, Anderson later references Robert Altman (an oft-cited inspiration) and the film Short Cuts in the scene where a phone sex operator can be seen on a call at home while caring for her baby. Likewise, the song “He Needs Me” is lovingly borrowed from Altman’s adaptation of Popeye and perfectly applied to the central relationship here.

Another important element of Punch-Drunk Love is its colour: the vibrant hues that swim just beneath the opening credits and in particular, the juxtaposing of primary colours Blue and Red. The former of which is given a more traditional association, coming to symbolise the protagonist’s loneliness and isolation, with Red gradually introduced to the film in moments that disrupt this: moments of heightened emotion, such as warmth or even freedom or danger – anything whatsoever that might threaten the protagonist’s isolated existence. As such, the blue suit that Barry wears throughout renders him a shuffling, mumbling, physical manifestation of lonesomeness. Whereas, it is the red truck outside Barry’s office that jolts him into action and the red dress introduced with Emily Watson’s yellow-haired Lena that leads him to happiness.

And it is through these primary colours that we ourselves are led towards the film’s most striking cinematic reference: that of Jean-Luc Godard’s A Woman is a Woman, which also playfully subverts the romance genre. Punch-Drunk Love resonates with the same style and feeling of the films of the French New Wave – including one or two indirect nods to the work of François Truffaut, particularly Shoot the Piano Player – but this is taken slightly further with A Woman is a Woman, from which the aforementioned blue suit and red dress seem to have been reverently pilfered. Like Godard and his favoured cinematographer Raoul Coutard, Anderson and Robert Elswit also take measures to exhibit the dance of Blue and Red upon a neutral stage, or monochromatic background: the colourless walls of an office or apartment, sparsely furnished. If Blue and Red is the respective visual representation of each character, White is then the open space that surrounds and encloses – but does it represent security or imprisonment?

Finally, there is another technique that Anderson borrows from Godard in order to add more colour to even the most rudimentary of scenes – a character marching down a narrow corridor, for example, or breezily entering an empty bar – specifically, to add more of the colour blue. This is of course the lens flare, which has become even more common among the mainstream in recent years as a conscious technique (thank you, J.J. Abrams) added to the film – often in post-production – so as to invoke some increased sense of drama or awe. In Punch-Drunk Love this is typically employed on occasions of personal breakthrough for Barry, or moments of emotional resonance shared between he and Lena. Thus, we experience the true grandeur of their love in that it envelopes all else, paling both the frame and Barry’s problems into sweet insignificance. 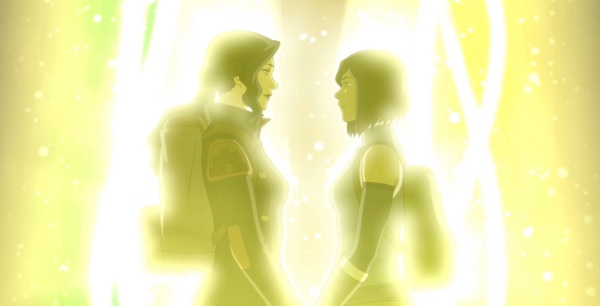