Stars bring a character to life on the screen; but behind them is another kind of actor that brings life to that character’s world.  They are the seasoning which turns a good meal into a great meal, the chinking keeping a cold wind from blowing through the holes in a script.  Call them what you will:  supporting players, character actors, familiar faces, second bananas.  To most viewers, their names mean nothing, and a headshot over their obituary usually draws little more than an, “Oh, yeah, that guy!” They rarely get their due, often only at their passing, which, sadly, makes it time to give one of the best his due – Michael Gough, who died this week at the age of 94.

All of his obits usually start with saying he was best known for his role as Batman’s faithful butler Alfred in the Tim Burton version of Batman (1989) and its three sequels.  That’s often the lot of a supporting player like Gough; they’re always “best known” for their most visible role.  But this almost always does them a disservice.  Actors like Gough are not about a role, but a body of work, a function if you will, to step in and step up, make a scene snap and pop with little direction, little instruction, knowing what they’re there to do the minute they get the call. 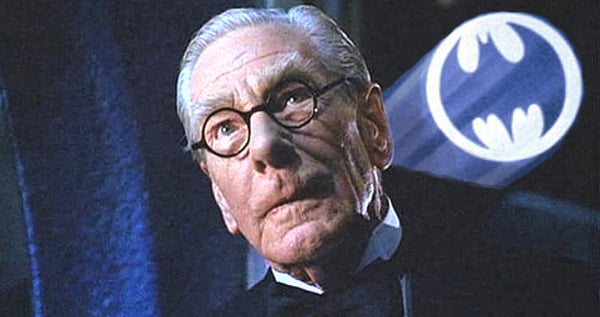 And this doesn’t count his substantial stage resume.  Gough –  like most of the memorable British actors of his generation –  found his start in the theater.  He’d studied at the Old Vic and was soon in demand for roles in London’s West End theater district.  Even as a film and TV regular, he never gave up the stage and copped a Tony in 1979 for his work in Alan Ayckbourn’s comedy, Bedroom Farce.

Though his film roles tended to feature his patrician bearing and a certain silky elegance, on stage he showed how ruthlessly he could chase down a laugh.  In a West End production of John Osborne’s A Patriot for Me, Gough’s Baron von Epp ruled over a drag ball as a gowned and tiara-ed Queen Alexandra, complete with handbag and fluttering fan.

Though he never gained the stature of contemporaries like Olivier, Richardson, Gielgud, it was not through lack of talent.  Olivier himself thought enough of Gough to cast him in his screen adaptation of Richard III (1955), a veritable showcase of English theater big guns including the above named Big Three.

As is the British theatrical tradition, the material – at least on film and TV – was secondary.  Dr. Who or Pride and Prejudice; no matter.  A working actor works, and as a craftsman he always does his work as well as he can:  big screen, little screen, schlock, high art – all done with the same commitment, the same finesse, the same class.  That was Gough.  Whether he was playing the mad scientist in a poor boy’s King Kong like Konga, or deliciously playing the silliness straight-faced in Top Secret, or taking his place in the Battleship Row of class acts in the background ensemble of Scorsese’s tribute to Ophuls in The Age of Innocence, no matter how big or how small the part, he never condescended, he never phoned it in, and, with a sniper’s precision, always knew his place in the wider fabric and never showboated; Michael Gough was always there.

And in another grand theatrical tradition, he remained in his traces nearly to the end.  When his body could no longer hold up to the rigors of the work, he still had that lovely, regal voice which enlivened animated characters in The Corpse Bride (2005) and Alice in Wonderland (2010), both from Gough fan Tim Burton.

The familiar faces, the second bananas; with a combination of talent, skill, and a certain particular charm, they keep their few lines and few scenes from being throwaways, make the smallest characters come alive in the same moment in the same world as the biggest characters played by the biggest stars.  Their value is never appreciated until they’re absent and then you suddenly notice a movie becomes a little less alive, a story a bit less vibrant and full, the screen a little emptier.

Michael Gough passed this week, and now we can appreciate what he gave us because our screen is now forever a little emptier. 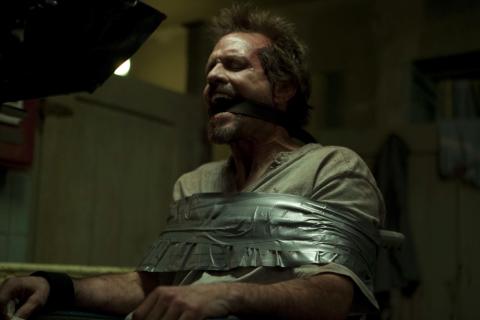