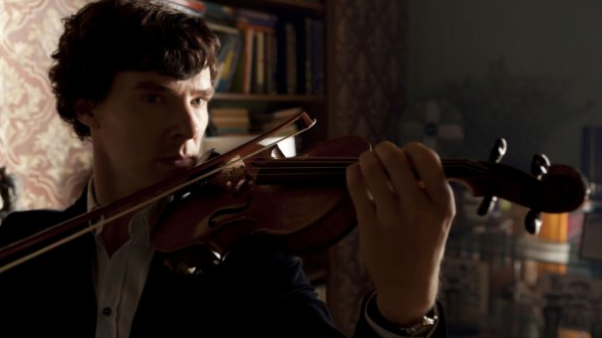 Sherlock fans have been waiting for the second season for a long time.  With Martin Freeman’s commitments to the forthcoming Hobbit films, fans of the rejuvenated adaptation of Arthur Conan Doyle’s famous creation have attempted to deduce what would happen in the second season.  There are now numerous blogs and websites dedicated to Sherlock, subsequently creating a cult following for the new decade.

A Scandal in Belgravia starts where the cliffhanger finale ‘The Great Game‘ from the first season finishes.  We see Moriarty taking a step back from being the bad guy, opening a new plotline for the second season.  In this episode, we see Sherlock and Watson foil a scandal involving the Royal Family going public, by taking down ‘The Woman’.  In comes new adversary Irene Adler, who proves to be a match for Mr. Holmes in more ways than one.

The chemistry between Benedict Cumberbatch and Martin Freeman is as fantastic as it was in the first season – they bounce off each other and click like the awkward kid and the smart alec at school, these two seem to go hand-in-hand.  Cumberbatch is wonderful as Sherlock.  Deductive yet arrogant as ever, his emotional state comes into play throughout the episode.  Whether it is storming out of Buckingham Palace in a bed sheet or his interactions with Adler, all of this brings out more of Sherlock than we have ever seen before.  Freeman’s Watson appears to be more relaxed and therefore settled in his partner’s analytical skills, so there is noticeably less tension between the two characters during their cases.  However, it is this tension that induces a portion of the show’s humour in the first season, and something sorely missed in this episode.  The only snippet of this we get to see in A Scandal in Belgravia is when Holmes goads Watson with comedic effects.

However, forget about Sherlock and Watson for two seconds; this episode belongs to Adler, played by True Blood‘s Lara Pulver.  Seductive, manipulative and calculating immediately spring to mind – as the only woman to outwit Sherlock Holmes in Doyle’s novels, she’d have to be.  Her racy introduction to Holmes and Watson raises a few eyebrows to say the least, because Holmes cannot use his extraordinary observation skills.  It’s like she was aware of what he can do and how to beat him at his own game.

Something else pops up in A Scandal in Belgravia – it’s time to talk about sex.

With Adler’s introduction, you need to remember that she is The Woman, so the notion of a woman getting Sherlock Holmes all hot and bothered is improbable.  As we see her tease and toy with the eponymous hero, it’s clear how Adler affects him.  Even Mark Gatiss’s Mycroft Holmes, hamming it up when he can, shows a brotherly concern when it comes to the L-word and Sherlock. Compared to his appearances in the first season, this is a first.

In terms of pace, it falters at times with it coming to a sudden halt towards the last third of the episode.  Although wonderfully written, there were times when there was a lot going on – there are a number of plotlines that are seemingly interwoven, Sherlock-style, but at times, there is the feeling that you have to be two steps ahead to understand what is happening in that second, but the dialogue and the interactions between the three protagonists keep you gripped.

A Scandal in Belgravia serves as a warm welcome for fans of the first season and the perfect opportunity for newcomers to get involved before next week’s episode ‘The Hounds of Baskerville.’  Welcome back Sherlock, we’ve missed you.