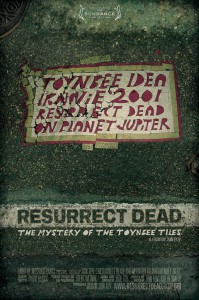 It’s quite reassuring that despite living in such a fast paced, busy and prioritized world that seems to have waved a thin curtain of disinterest over the smaller matters that there are still some people out there, often labeled subversive or other much less flattering terms, who show the will to stop and chase a dream, no matter how unusual or socially lamentable. Most of us traipse along busy city streets with heads down and music blaring from our headphones, engulfed in our own bubble of privacy and treating our surroundings with disregard. Some of us, the likes of unconventional Sherlock Holmes Justin Duerr, take the time to spot the bizarre messages left for us on said sidewalks and intersections.

When a series of bizarre tiles began appearing on the streets of Philadelphia in the early nineties, Duerr, a squatting artist, was one of the few to notice. As the mysterious messages began spreading, appearing in various major cities in the United States and eventually finding their way to South America, it became an internet culture phenomenon and living fascination for many and Duerr was at the head of the queue, going further than wondering and instead investigating.

It’s an amateur detective case that was captured in enthralling glory by Jon Foy, a low budget documentary aimed squarely at a cult of the curious. The tiles, often showing up on busy roads and tunnel entrances without due care for logic, were smelted on to the asphalt and always bore the same primary message: “Toynbee Idea – In Movie 2001 – Resurrect Dead – On Planet Jupiter”. Some were accompanied by a smaller, secondary inscription, always handwritten, which detailed a conspiratorial and paranoid agenda taking in the FBI and the national media. It would turn out that these tiles had made their first appearance in the late 1980’s, long before the advent of social media made widespread trolling a possibility. They were the work of one disturbed and potentially dangerous mind. Whereas most would dismiss this happening as the works of some nut, and end their interest there, Duerr and fellow enthusiasts Steve Weinik and Colin Smith instead began looking at the clues and hints in an attempt to decipher the message – learning the links to historian Arnold J. Toynbee and the film 2001: A Space Odyssey – identify the tiler and eliminate the links to playwright James Mamet and news anchor Larry King. It starts a journey spanning more than a decade that eventually lifted the lid on a fascinating and truly baffling origins story. 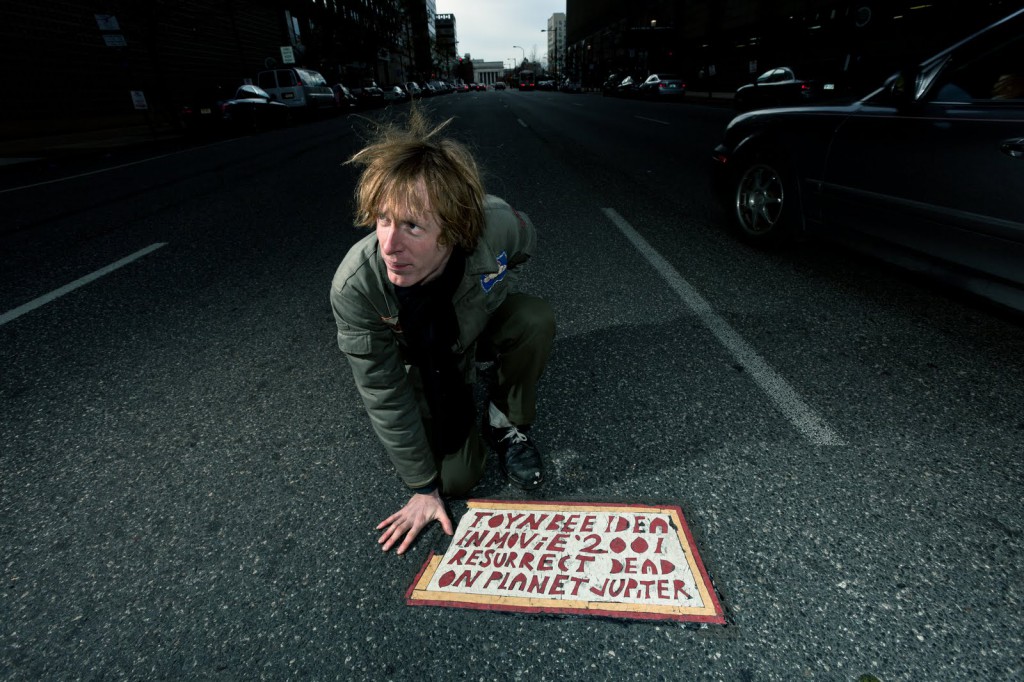 There are times when watching Resurrect Dead when you begin to question the reality of documentary that you are being presented with. The decision to mount a full time operation to decode the meaning of schizophrenic street art is one that would invariably lead one down the rabbit hole into some very strange places, and the patterns found suggest at something larger and less arbitrary existing just out of sight. This element of the bizarre is gleefully exploited by Foy, a director sure to be on the cusp of a great career in the genre and beyond, as he both captures the passion of the investigation and provides an intimate and insightful character study on Duerr, the charismatic if eccentric lead investigator.

The suggestion that he and the mysterious tiler are kindred spirits in a sense is palpable yet subtle, part of a subtext detailing the highs and lows that such fascination and passion for the unknown and unusual breed, the finer points of human inquisitiveness that makes a mystery so delicious contrasted with the emptiness of obsession. The latter theme is drilled home in the closing stages, as revelations finally paint a method in the madness but unearth a likely back story that is tragic and ultimately unsatisfying. How the trio get there, however, is far from that and the ending may be a downer but is appropriately sensitive, thoughtful and honest to itself. After so much searching, finding the man behind the message would always prove to be an anti-climax; that said man is never actually seen or interviewed proves to be perversely appropriate.

But the fact remains that they do get there, and although their conclusion is more a case of ‘probably’ than ‘definitely’, it takes a highly questionable mind to fault the logic of their findings. You would also have to be quite the dark-hearted cynic to besmirch the Herculean efforts that the detectives mount, one that relies on old fashioned techniques and determination rather than computer databases and quick fixes. They begin with three potential suspects, all of whom have tenable links but also apparent alibis ruling them out of the running, and yet manage to eventually find a connection that redeems the work of previous investigations. The fact that the three are not the first to find the tiler is both a fascinating tidbit and further material for the film’s real focus. 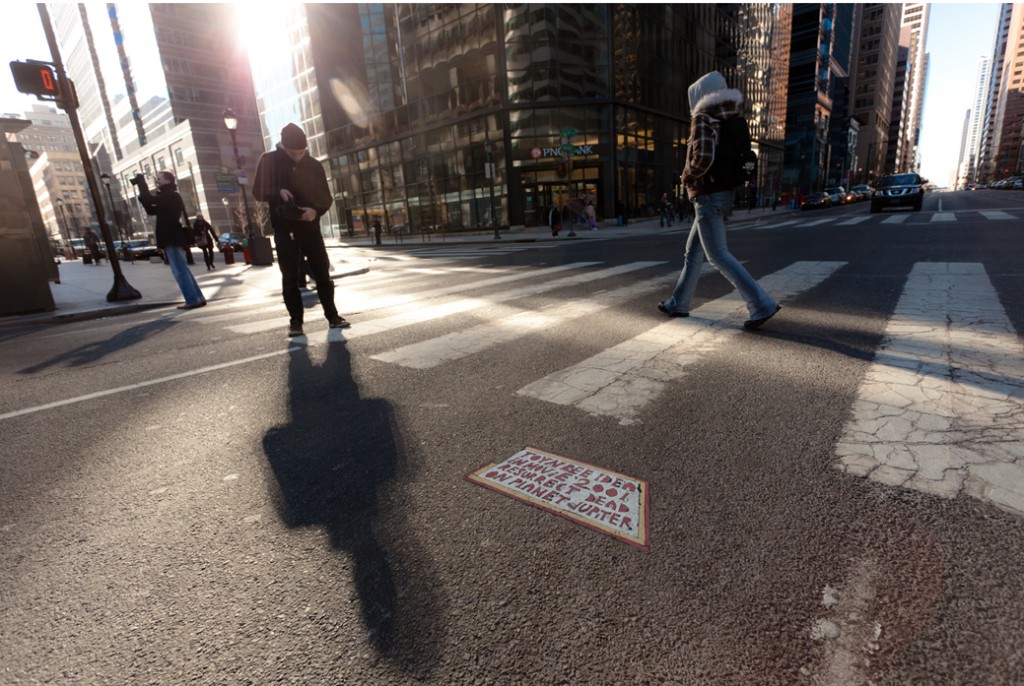 Using leftovers from previous enquiries proves fruitful if arduous, and actually finds evidence that once upon a time the ‘Toynbee Idea’ movement went further than simple graffiti. This discovery leads to a hugely satisfying, cinematically powerful moment when a surname is posited to short wave radio enthusiast, who promptly responds with the first name, a first class eureka moment one can rarely conjure up even in contrived fiction. The ball of string finally unravels at the ingenuity of the tiler is revealed, as well as his identity, background and possible motive, although the logic behind a man’s belief that the dead can be brought to life via the obscure musings of a legendary writer is sadly never examined. We do learn enough, however, for such a facet to not be essential.

While the Toynbee Tiles provide a wonderfully mysterious foreground for the action within Resurrect Dead, it is in Jon Foy’s attention to the greater themes of human curiosity and the power of personal crusade that the film becomes something more substantial than merely a passing interest. Much like in David Fincher’s Zodiac, we learn so much more about the people who search for the perpetrator than the perpetrator himself, and there is something both inspirational yet worrying about their focus and obsession. In a world given to apathy and ignorance, those who would ask the questions are individuals on the fringes whose devotion, however exemplary, is ultimately tragic. The appropriately named Justin Duerr is the real subject of the film, and a worthy subject he is too. The fact that proceedings are so enthralling when not disturbing in their strangeness is merely the icing on the cake. 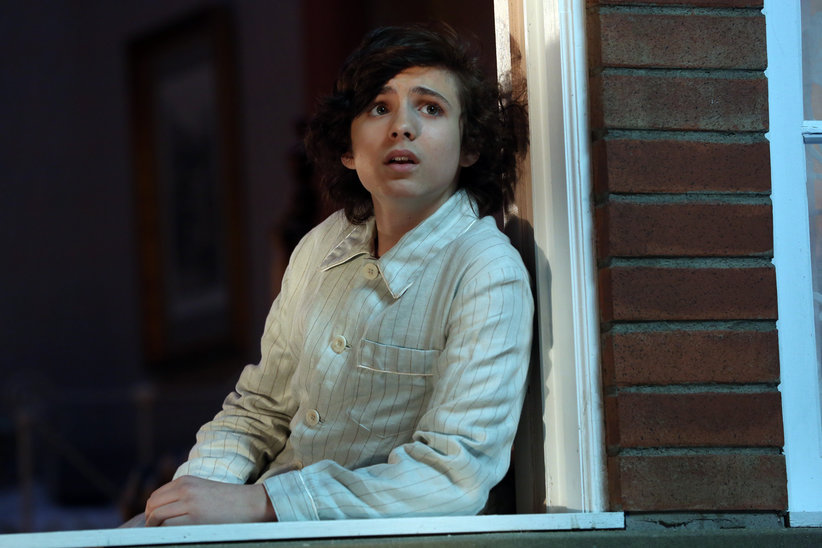 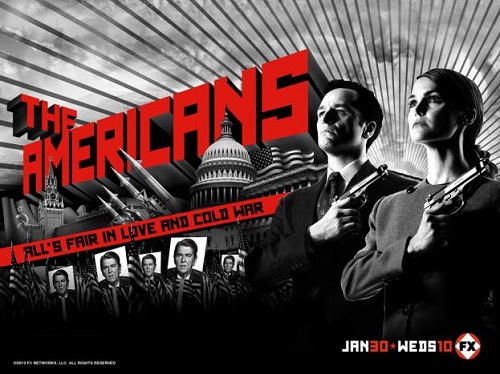