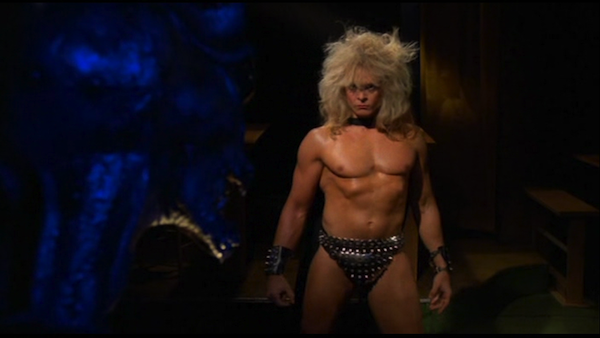 The first scene plays out like an anti-thesis to the satanic and heavy metal antics that the film devotes itself too. The setup is quaint. A young father happily shaves his face. A young mother is cooking breakfast, and their son yells that he can’t wait to scramble eggs with her! All of the sudden demons pop out of the oven and kill the mom and dad. Thus begins Rock ‘n’ Roll Nightmare – also known as The Edge of Hell in certain parts of the world – perhaps the most definitive entry into “Metalsploitation”.

What is “Metalsploitation”? One of my friends brought the term to my attention, and I’m not sure if that subgenre classification already exists, so if not congratulations to him for inventing it. Metalsploitation exists in this bizarre era of cinema where horror films and heavy metal artists and music met. It produced cult classics like this, Black Roses and Trick or Treat (not to be confused with the very dope 2007 Trick ‘r Treat).

Jon Mikl Thor (of heavy metal band Thor) starred in, wrote and produced the film, which follows him pretty much playing himself as Jon, lead singer of hair metal band Triton, as they retreat to a house in the Canadian countryside with their girlfriends to do two things: make rock and make love. The only problem is that this place is haunted, and demons begin to possess them each one by one.

Directed by Heavy Metal Horror auteur John Fasano (he also directed the metalsploitation classic Black Roses the following year), the film’s horror elements are studied from previous horror hits of the 80s. It’s safe to claim heavy influence from Sam Raimi’s The Evil Dead, multiple shots feature the camera gliding throughout the set is a technique that is straight out of Raimi’s playbook, and the creature effects are something he would admire. John Carpenter has his influence in the synth-heavy minimalism of the score.

The film is riddled with flaws and implausibilities (even for a film with this plot) that somehow only contribute to its cultish charms. When the drummer is playing, it’s completely off from the track. There’s a whole lot of sex in this film. When they’re not cranking out headbangers like “Energy” and “We Live to Rock” or running from demons, they’re having long and awkwardly staged – and I mean LONG and AWKWARDLY STAGED – sex scenes. “Why couldn’t you have become a coke dealer or something sensible?” is an actual, non-ironic line of dialogue that one disgruntled girlfriend says to her drummer boyfriend. 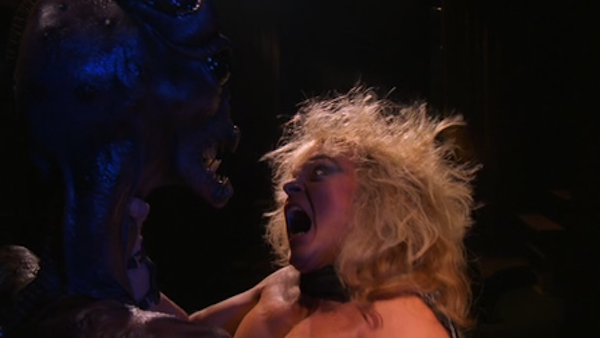 The film features one of the most bizarre and unbelievable twists I’ve ever seen in film just before its climax. After having possessed all the bandmates and their girlfriends, Satan finally appears in the flesh before Thor. For some reason Thor knows the name of Satan in multiple languages. He was actually plotting the whole vacation as a ruse to fight him, because Thor is actually an archangel, referring to himself as the Intercessor. That’s right, everyone at the house isn’t real, Thor just conjured them all to piss off and distract Satan, and I guess also to have sex with each other?

The first half of their fight is Satan lobbing tiny little octopus looking demons that are clearly fake, while Thor does his best to sell the audience on them by catching them and reacting like they are hurting him. Then they just grapple with each other for several minutes, and again Thor is doing his best to sell all of this. There are no sound effects that play over this, instead some heavy metal by Thor himself. When Satan is defeated, some cheap fireworks go off in the foreground of the shot of him to represent his disintegration. On second thought though, its ridiculousness somehow makes perfect sense in the context of this film. How was I surprised, of course Thor is a warrior of God.

Does it sound like I’ve been complaining about this film? I’m actually not, I genuinely adore this film, as it’s so earnest about how cheaply made it is that it becomes impossible to not fall under its spell. Thor is having the time of his life in each second on screen, and his enthusiasm bleeds out into you. The sheer theatricality of Thor’s performance is winning, and is precisely what elevates the film from b-grade horror to the cult hit that it is today. Metalsploitation sadly didn’t have much longevity even in its prime, but it left behind some wonderfully enjoyable films, and Rock ‘n’ Roll Nightmare is the most definitive of this short-lived era of genre cinema.