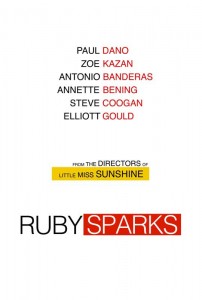 Ruby Sparks, the second film from the Little Miss Sunshine team of Jonathan Dayton and Valerie Faris, is an odd bird. It is a comedy which will make viewers chuckle, and a love story which will pull the heartstrings. As such, it is definitely an effective film. However there is a certain something missing from it, something which keeps the chuckles from turning into full guffaws and the heartstring-pulling from being genuinely moving.

Calvin (Paul Dano) is a novelist whose first book was a smash at the ridiculous age of 19, but he’s going on 10 years without having started his second novel. He sees an unusual redhead in a dream, and begins to write a story about her. After weeks of writing he wakes one morning to find his character, Ruby Sparks (Zoe Kazan, who also wrote the film), in the flesh and cooking in his kitchen. She’s his perfect girlfriend, just as he wrote her to be, but flesh proves to be more complicated than dreams. Ruby is a Manic Pixie Dream Girl, of course, and the film gets that fact out of the way early. “You don’t know jack shit about women,” Calvin’s brother Harry (Chris Messina) tells him, which is exactly what most MPDG characters indicate about their authors. Harry is also an interesting twist on the typical male-best-friend character: he’s a lewd cad from time to time, but he’s also a loyal husband and father who provides Calvin with all of the most useful relationship advice that he receives. Harry is as much a statement on weak movie writing as Ruby is.

Wisely, Ruby Sparks does not try to blow up the MPDG stereotype by making Ruby angry or damaged. Too many other movies have already trod the path blazed by Eternal Sunshine of the Spotless Mind, keeping their characters from being MPDGs by making them “fucked-up girl[s] looking for [their] own peace of mind.” There’s more than enough drama to be had by debating Ruby’s agency – the biggest conflict in the film comes from trying to take away her power to make her own decisions. As that conflict builds to a climax, the movie loses its way somewhat. Annette Bening and Antonio Banderas are very funny as Calvin’s parents, but they seem out of place, as though they were written for a different movie and shoehorned into this one. The drama that is caused by Calvin and Ruby being around them easily could have happened with Harry and his wife instead. Also, the climax itself doesn’t work; Dano and Kazan are great in every other scene, but unfortunately that is the most important scene in the movie, and both of them seem artificial and awkward in that moment.

At the end of the day, Ruby Sparks is a movie that is worth seeing. Kazan’s screenplay makes a strong and sincere statement about the shortcomings of female characters in today’s romantic comedies (roles that she has likely auditioned for many times). But at the film’s most important moments, its characters don’t quite feel like real, flesh-and-blood people – a crucial problem for a movie which demands they be exactly that.