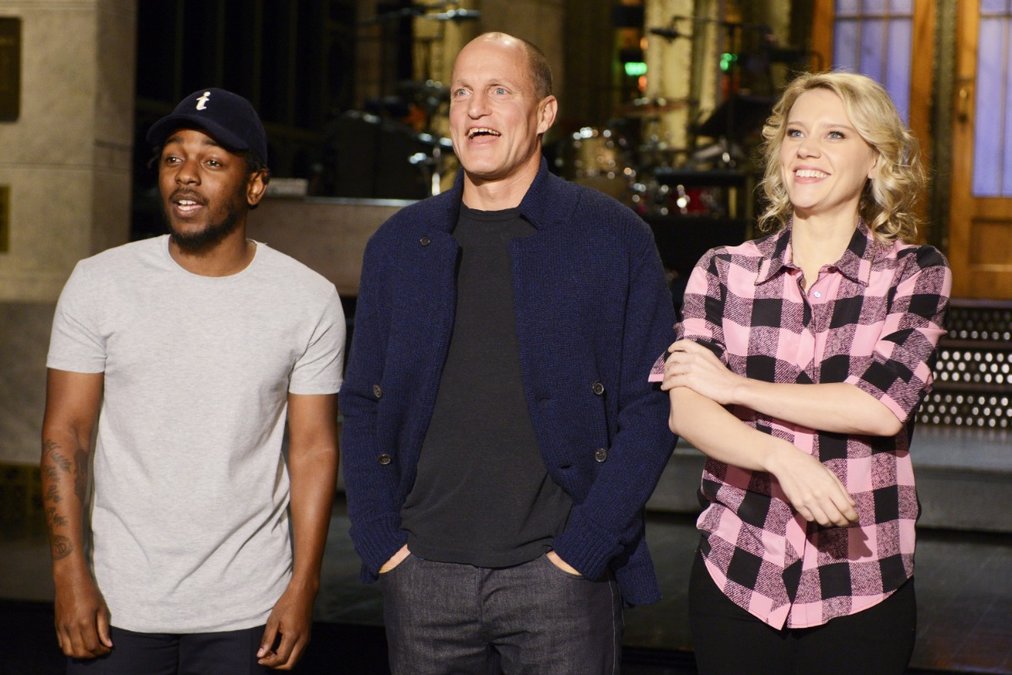 The nature of sketch comedy means that anything can happen. It’s an inherent feature of the form, one that can lead to some truly transcendent weirdness and some pretty bland filler. Take Key & Peele, for example: By being a sketch show, they are able to do things like have a silent short commenting on the Trayvon Martin case and racial profiling, and have goofy things like the East/West Bowl sketches (“Everybody’s talking about Fudge”). But because anything can happen, this invites unevenness into a sketch show more easily than in other programs. The main goal of any good sketch show, other than being funny, should be consistency. With SNL, that consistency can come from a variety of places, but it’s always a little refreshing when it comes from…

The Host: People kind of forget about Woody Harrelson. But between the Hunger Games movies — which he is on the show ostensibly to promote — and his fantastic turn on True Detective, Harrelson’s part of the public consciousness again, meaning he gets to host the show for the fourth time. The thing that makes Harrelson such a good actor is what makes him such a good host: Total commitment to character. Harrelson effortlessly takes on the variety of roles he plays throughout the episode, whether that be goofy pothead in the monologue, stern gameshow host/father, grounded crackhead, or super cheery guy who loves a song about apples. Very rarely in any given season is the host the through-line in an episode, but Harrelson is a great calm center for this whole show, making it easier to not get burnt on the weaker earlier sketches, and really bringing the magic in the post-Update sketches.

Best Sketch: This one is hard to call, as it’s essentially a tie between the post-Update sketch and the 10-1 sketch. Both center around people talking at a bar: The first finds Taran Killam, Bobby Moynihan, Kenan Thompson, and Harrelson (the episode is very dude heavy as a whole) lamenting about how much New York has changed; the second has Harrelson and Kate McKinnon playing the recurring bit about the two weirdos at last call who hit on each other. The first sketch has a relatively simple punchline, as the characters lament the deluge of things like fro-yo shops, except for Harrelson’s character, who’s really burnt by the degrade in quality of crack. Harrelson’s commitment to the role of a hard working joe who is just super bummed that crack ain’t what it used to be totally sells the sketch beyond its single note; his reading of his first line, “Remember the crack!”, is the biggest laugh of the night. The second sketch keeps the idea of lonely horny weirdos fresh with some solid laugh lines (Harrelson’s character’s name is Chip Pfister and he’s a chip sifter; “I’ll have a tequila and condensed milk”; “I think I just dejaculated”), great cutaways to Thompson as the bartender (“Moonlight come and me’a want go home”), and the sheer oddness of Harrelson and McKinnon making out through saran wrap. SNL can get tiring when it’s one-joke, but when the jokes are this sharp, it’s easy to see why they fall back on it. 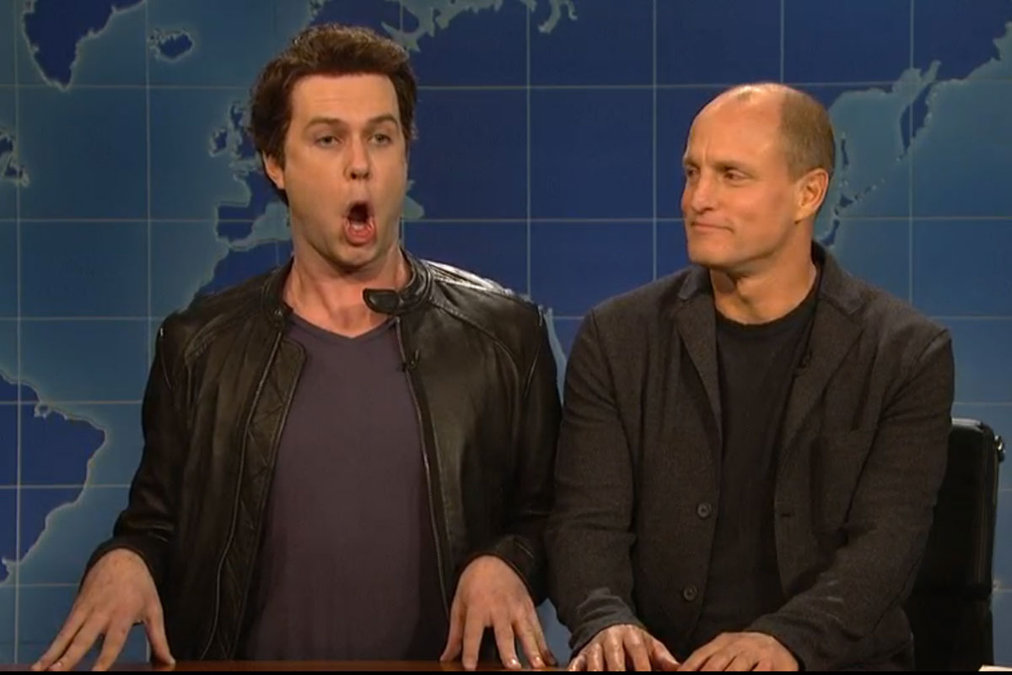 Weekend Update: Update is really the spark that gets things going. Before it, the sketches are weak premises that survive solely due to Harrelson’s performance. But along comes arguably the beast overall Update segment of the season to kick things into reasonable gear. The first segment of “news” has a good running joke about how the anchors want to talk about things like ISIS and climate change, but are too distracted by Kim Kardashian’s ass in a recent issue of Paper (“I can now find porn just by goggling the word ‘paper'”). Colin Jost and Michael Che seem to finally be settling into a groove, with Jost playing the role of an aloof know-it-all that works when he has jokes to back it up, and Che only flubbing one line, which is technically an improvement. The highlights of this Update are the panel segments: First, you have Leslie Jones in crazy-eyes spitfire mode using the excuse of a woman crawling down a man’s chimney to riff on the expectations woman have in relationships, such as how much of a relationship is internalized by women and that they have to be ready for “whatever penis” they get. This ends on the fabulous line “If you end up in our pants, don’t be surprised if we end up in your chimney”. The other segment has Killam and Harrelson, and is True Detective centered, with Killam playing Matthew McConaughey and Harrelson playing, well, Harrelson, that is really just an excuse for Killam to bleed charisma and engage in some great physical comedy; Harrelson’s barely contained smile throughout the whole segment from just watching Killam work is a nice little treat as well.

Weakest Sketch: If you set a sketch during half-time of some sporting event, and you can’t top Will Forte dancing, then just throw it out. Here is the show trying to say something about football and concussions, but never really finding anything to say than “man, concussions sure do suck, but football would be real boring without the types of tackles that lead to them.” Thompson keeps this sketch from being a true stinker by playing a former player who has a tenuous hold on syntax; “I never football” is practically his catchphrase.

Musical Guest: Kendrick Lamar is the perfect example of why rap is such a young man’s game. His energy throughout his two performances last night is enough to defibrillate viewers with weaker hearts. The first number, “i”, is the better of the two, with Lamar set alone in the middle of the stage, with his band in a horseshoe shape. This gives Lamar the ability to fill the rest of the empty space with his presence, as he chooses to shout lyrics in some kind of sweaty trance, rather than recite them. It’s as if he is finally making good on his “King of New York” boast from “Control”, and it’s practically undeniable.

Other Notes: Pre-taped stuff is iffy again, with the exception of Young Tarts & Old Farts, which allows the cast to all bust out a good-great musical impression. The cold open is a cute sketch about Obama and Mitch McConnell getting drunk together. This show really is dude heavy, with Jones’ update segment being the only female led-bit of the night. Oh, and Harrelson’s Hunger Games co-stars show up to cap off a messy monologue, but they all have such genuine chemistry that it is practically forgiven. 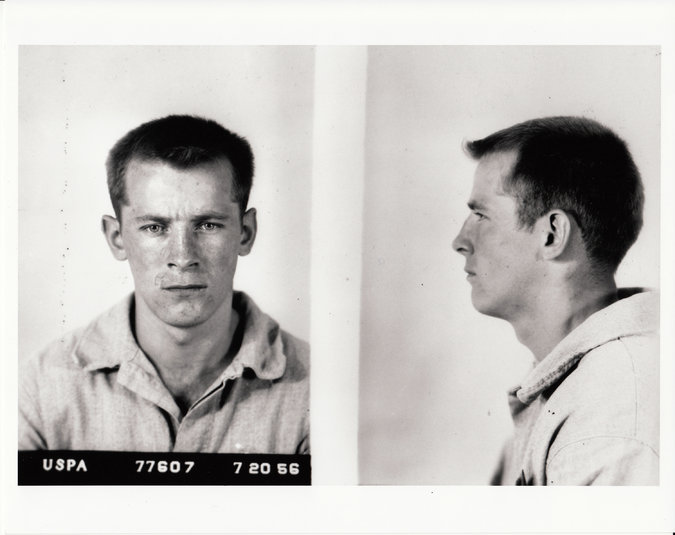