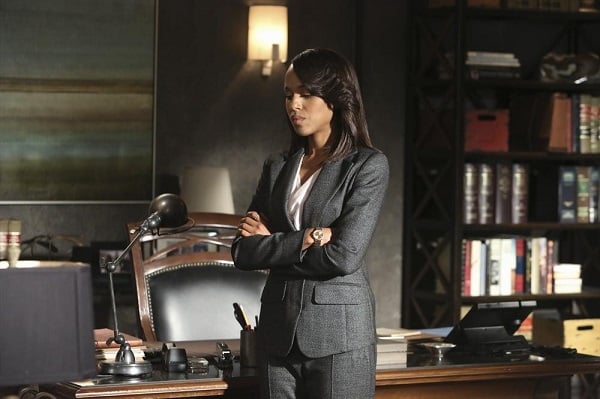 On this week’s Scandal, Olivia Pope goes to war with The White House (again), Fitz grows some “presidential-sized balls,” Mellie manages to shock Cyrus, and Jake is granted a reprieve from the horrifying hole of insanity.

No one on Scandal works (or lives) in Wonderland–especially not Olivia Pope herself. At any given moment on the show, somebody is fighting for their life, their career, their reputation, etc. After so much fighting, you’d think every character on the cast would be ready to drop their D.C. lives and head to Vermont for some jam-making, but no, that’s not how these Gladiators work. They’ll fight to the death; unfortunately, such unrelenting determination means people will begin to crack.

Luckily for the viewers, it’s the Head Gladiator herself who appears to be hurtling toward collapse. With her father in town and her illicit lover leading a battle against her, Olivia Pope’s stretched so thin emotionally that she keeps snapping at the people she cares about before running into rooms to cry alone or stare mournfully at the floor.

Last season, Olivia Pope spent an episode in bed, having shut down completely, until Huck pulled her out of her funk. Now, Huck might turn against her–the pair have such a fascinatingly complex dynamic as friends that it’ll be hard to see their relationship fracture (if it does at all). The two are extremely dependent on one another, and not just for work purposes–they complete each other emotionally and understand one another better than they understand anyone else in the office. Olivia’s back story with her father unsurprisingly (and brilliantly) coincides with her early relationship with Huck. Huck’s a great character overall, and is easily given some of the best storylines on the show, so learning more about his relationship with Olivia is a treat.

Strangely enough, Olivia’s emotional strain coincides with Fitz’s growing assertiveness–after two seasons of watching Fitz be dominated by all of the women in his life, Cyrus, and his father (just to name a few), it’s nice to see the Most Powerful Person in the United States (as he likes to say frequently, but rarely proves with his actions) finally take charge of his own life. Maybe now he’ll be a worthwhile love interest for Olivia; he’s always seemed a little beneath her. Of course, he resumes his jealous teenage boy persona the minute Olivia mentions Jake, so maybe “worthwhile” is still a bit of a stretch.

One of the biggest issues on the season (already) is the huge focus on Olivia’s love life. Yes, it’s always been a big part of the show, but now everyone’s motivations seem to be fueled by it. Just because Olivia had an affair with the president doesn’t mean she should be defined by that relationship. Even her father flits in and out of the storyline (both in the present and in the past) simply to control Liv’s significant others. Olivia is much more than the men she is or isn’t sleeping with and it’d be nice to see Liv return to the days when her whole life (and especially her work) didn’t center on her romantic entanglements.

Anyway, good things are potentially on the way, with Cyrus especially, so maybe the attention will finally shift off Olivia’s budding love triangle. Quinn and Mellie are in desperate need of better storylines (Quinn’s already halfway to one), and where’s Cyrus’s husband? Of course, we’re only two episodes in, and Scandal so rarely disappoints.