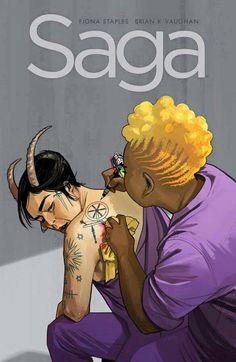 It’s all coming together. The characters, both old and new, are coming together for an epic conclusion. As Klara tries to find a way to get Hazel out of prison, Alana and Marko make their way to the planet with the assistance of Knight Robot IV. They got a crazy plan to break Hazel out. Unfortunately, the Will is not too far behind. With the unwilling help of fish men journalists Upsher and Doff, he’s going to find IV and have his revenge anyway he can, no matter who gets hurt. Will Marko and Alana be able to save Hazel and reunite their family, or will adversity yet again break their hearts?

This issue is awesome. Go read it. Still not convinced? Well, let me convince you then.

Admittedly, this cover isn’t as interesting as the past issues. Lately, the covers for this arc have included incredibly detailed environments that give National Geographic a run for its money. Here, it’s the close-ups of characters that were common to previous arcs. They’re not as awe-inspiring, but that doesn’t mean they aren’t great. The detail to both Klara and Noreen is realistic and meticulous, especially Klara’s tattoos. Although this cover has no environment, the gray background and purple jumpsuits make it apparent that both are in prison. At least here, the reader gets a sense of where the two are.

You know, I’ve praised Fiona Staples’ art on this website like the zealous fanboy that I am for months. Aren’t you tired of it? Well, you might, but I’m under contract and I never get bored of it, so here we go again!

Staples’ art continues to establish her as one of the great illustrators of this generation. The beautiful colors, the simultaneously realistic and fantastical character designs, the out of this world scenery. All other lowly illustrators weep at their failure to compare. The scene that sticks out the most is when the tree ship is being attacked by “hive mines.” The mines’ design seems parasitic, like insect eggs. Appropriate given the nasty bugs inside. More so, the black void of space gives the scene an epic scale. It might not be much, but it definitely gives one a feeling of excitement. Staples is a master of creating epic scifi scenes.

What more can I say? It’s Fiona Staples. She rocks. You’ll love her art. Oh, yeah, and Fonografiks is still kicking butt with their clean, easy-to-read, and prose-like lettering.

As always, Brian Vaughan expertly fuses scifi action with character drama, whether it be Alana 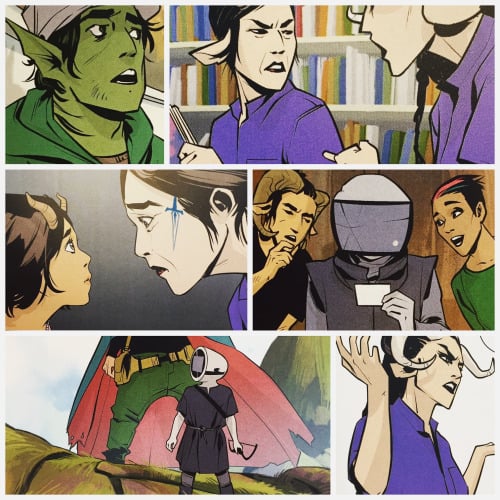 and Marko trying to survive a minefield or Klara trying to figure out a way to get Hazel out of prison. Character and plot equally develop, a feat that is difficult and still suffers an imbalance in this issue.

All the different plot lines are converging; all the beloved characters plus some new ones are about to meet for an epic conclusion in true Saga fashion. Unfortunately, interesting themes set up in all the separate plots seem to take a backseat as a result: Hazel’s slow understanding of identity politics in prison, the morality of Upsher and Doff’s journalistic pursuits, The Will’s descent into madness, Alana and Marko’s questionable actions to rescue Hazel. Any of these plots could have been their own story arcs, but given the publishing schedule of Saga just wouldn’t be pssible to do, and would probably be too complex to execute properly in comics.

However, Saga #35 is still a satisfying read. Although the aforementioned themes are never fully explored, they are great talking points for the reader. Maybe the upshot to this is that these brief glimpses into serious themes allows for pondering and reflection, to develop personal theories on what they mean in the bigger picture of both the comic and real life.

Saga #35, despite its difficulty balancing the separate plots, is still a satisfying read with great art and storytelling. It remains one of the best comics on the stands, and I eagerly await the conclusion to this arc. I highly recommend it.

Also, if you love Ghus, he’s a total bada$$ in this issue! Whooooo!