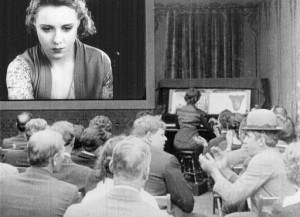 From the beginning of cinema theatre owners tried a variety of methods in which to add sound to film. Initially the reasons for the addition of sound varied from people being weirded out by seeing mute folks onscreen to utilizing it as a means in which to mask the noise made by the crude projectors playing the film. It soon became obvious to film exhibitors however that sound actually enhanced the tone and interpretation by the audience of the film. When the Lumiere brothers first demonstrated their films in 1895 in Paris, they had a piano player accompany the action on screen. The pianist would watch the screen and capture the changes of mood. When the first theatres opened in 1902 in the USA, methods such as using someone to create sound effects and/or dialogue as well as Thomas Edison’s synchronised disc (not always guaranteed to synchronise) proved a distraction to the cinematic experience.

The theatre owners soon realised that the most cost effective way of providing sound for film was to have live musicians in the theatre. The size of the theatre would often determine the amount of musicians – for example a small theatre might have just the piano or maybe an accompanying violinist whereas the first class theatres and deluxe cinema palaces may have as many as 80. During the nineteen-teens, several instrument manufacturers designed mechanical instruments to accompany silent films. Named Fotoplayers they were able to produce many instrumental sounds as well as sound effects. Some of these machines were enormous and the biggest Fotoplayer (made by the American Photo Player Company) was 21 feet long, 5 feet wide and around 5 feet tall. However it seems the most popular (and economical) method of accompaniment was still primarily the use of pianists or organists. 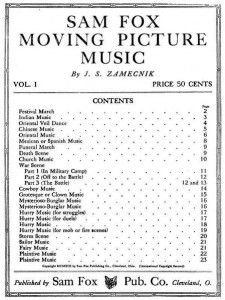 The piano accompaniment wasn’t always found to be pleasant. In 1920 a rather nasty article in The Musician noted of the piano accompaniment used in theatres, “The instrument is generally old, out of tune, strings dusty, and incapable of producing the correct vibrations. The stool has no back and the pianist plays for hours with the muscles of her back becoming constantly more strained. The light, both night and day, is poor and inadequate, forcing the pianist either to play by memory, ear or incorrectly by notes she strives to make out.” In fact as early as 1909 an editorial in Moving Picture World implored that theatre managers either tune the pianos or, more dramatically, burn them.

The piano accompanist’s job was by no means an easy one, as noted in the aforementioned Musician article. Most of the time the musicians did not have time to see the films they were going to accompany and would have to guess as to the mood, timing, tempo and scene changes. Joseph Gershenson (who later became the musical director at Universal Studios) said of his experiences as a film accompanist in the 1920s, “I worked in little theatres with just violin and piano. When I played the silent movies in the small theatres, they had a big machine with pulleys. If you wanted a rooster crow, you’d pull one button. If you wanted an auto horn, you’d pull another. And the pianist used to do all that. These things were all set up. It was an old Wurlizer machine, a big machine, attached to a piano. A knock at the door, or a telephone bell, another lever. The pianist would have cue sheets for it.” As you can imagine, this was a rather exhausting and one would assume, comical process. Many other famous musicians and composers got their start in the music world as a film accompanist, for example the ‘stride’ pianist Fats Waller. Even the Russian composer Dmitri Shostakovich endured a grueling stint at a movie house as a young man. In a letter, his wife recalled in 1924, “Down in front of the screen sat [Dmitri], his back soaked with perspiration, his near-sighted eyes in their horn-rimmed glasses peering upwards to follow the story, his fingers pounding away on the raucous upright piano. Late at night he trudged home in a thin coat and summer cap, with now warm gloves or galoshes, and arrived exhausted around one o’clock in the morning…”

The early piano accompanists would play whatever came to mind without regard for the action on screen. Initially no one cared but when film became more sophisticated and began to be viewed as a legitimate art form, the musicians became more considerate as to the music they played. In other words, no hoedown music was to be used when a funeral was onscreen. The film studios themselves also desired a means in regulating accompaniment so that the audience enjoyed a richer cinematic experience at their films. In 1909 the Edison and Vitagraph companies began distributing lists of suggested material to be used by an accompanist for their films. This helped the musicians immensely in understanding the intent and mood of the scenes.  These cue sheets would be passed on to the accompanist as a guide and even if they did not own a copy of the suggested music, they could substitute it with something similar they did own. Years later J.S. Zamecnik took this idea one step forward by writing several volumes called “Moving Picture Music”. They were conceived whist he was musical director at the amusingly titled Hippodrome Theatre in Cleveland as he was cataloguing accompaniment riffs. The first volume was published by Sam Fox Publishing in 1913, and included such themes as “Funeral March”, “War Scene”, “Hurry Music” and “Church Music”. Comprising of original music and snippets from popular songs and classical music, these books proved a huge success with those accompanists who weren’t master improvisers and they were also technically not out of reach for the average musician. The often irritating musical clichés developed in this period can still be heard in cinema today, particularly in the more obnoxious children’s films.

When film became more sophisticated it wasn’t only the studios that became involved in the musical accompaniment process but also the directors. One of the greats of American cinema, the highly innovative yet racially insensitive director D.W. Griffith, was an early champion of film scores and prepared his own musical cues for his films. He said, “Watch a film run in silence, and then watch it again with eyes and ears. The music sets the mood for what your eye sees; it guides your emotions; it is the emotional framework for visual pictures.”  To score his notorious film, Birth of a Nation, Griffith hired Carli Desmore, a musical “fitter”, to piece together musical bits and pieces from the classics. Later on Griffith used full orchestras for his films using scores by the newly recruited Joseph Carl Briel and even used him to rescore Birth of a Nation. The highly patriotic and even racist nature of the film was heightened by its score, which featured familiar patriotic anthems and the songs of the cringe-worthy “black-face” minstrel entertainers of the day. Numerous scenes were also scored by classical themes, for example Grieg’s “Hall of the Mountain King” was used in a scene in which Atlanta is shown burning and a silent movie favourite, Tchaikovsky’s Fifth Symphony, played when the oh-so-noble Klansmen rescue a woman from one of the horrible, sex-starved “mulattos”. Despite his blatant racism, D.W. Griffith and his attention to music in Birth of a Nation did change for the better the way in which music was used for silent film screenings.

The death of the silent movie musician came about in October of 1927. After taking a chance with a system that allowed 33 1/3 records to synch up with a reel of film, Warner Brothers released the film The Jazz Singer starring Al Jolsen, with the tag “All singing, all talking” and with no need for accompanying musicians. It was followed shortly by Walt Disney’s iconic animated short Steamboat Willie and its huge success indicated that sound in film was well and truly in demand by the public. Some studios were still making silents (Charlie Chaplin, for example, refused to convert) but by 1930 all the silent theatres had either converted to sound or went out of business. Today we are occasionally treated to screenings of silent films with live scoring and it often proves a unique and refreshing experience. 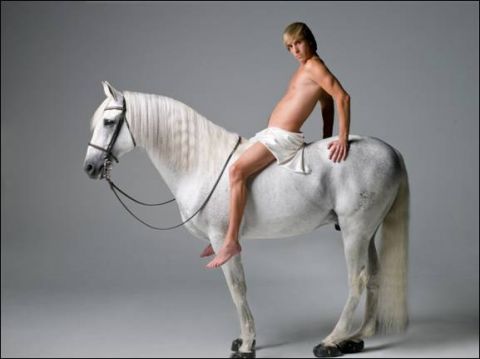