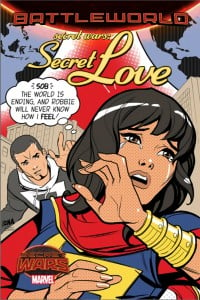 Recently, romance anthologies have made a little bit of comeback with former DC editor Janelle Asselin’s Fresh Romance title and even little one-shots like the Harley Quinn Valentines Special and 2013’s revival of the classic DC series Young Romance. Now, Marvel has gotten into the romance game with Secret Wars: Secret Love bringing a variety of Marvel veterans and newcomers to tell some fun love stories. There is an homage to Ann Nocenti and John Romita Jr’s run on Daredevil complete with a battle against Typhoid Mary, a special team-up between Robbie Reyes and Kamala Khan in the Ghost Racers universe, an extremely non-traditional date night featuring Danny Rand and Misty Knight, a hilarious “win a date with Thor (or Odinson)” tale, and finally a semi-experimental story featuring the Avengers as insects. All of them hit the mark in humor, action, or emotion, except the last story, which is salvaged by My Little Pony Katie Cook’s essence of cuteness art style.

Best known for his DIY/hard to find superhero series Copra and a short run on All-New Ultimates, Michel Fiffe’s 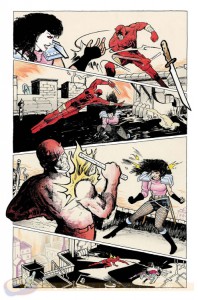 story “Guilty Pleasure” is a love hymn to that underrated period after Frank Miller left Daredevil, and Ann Nocenti and John Romita Jr portrayed Matt Murdock as solving the problems of Hell’s Kitchen through things like a clinic and not just his fists. Along the way, Fiffe channels the dynamism of Romita Jr’s art work and uses the excessive narration style of the Shooter-era Marvel books to give insights into how Karen Page truly feels about Matt. The story takes a weird twist towards the end, but Fiffe uses it to give a character, who got constantly fridged and beaten down even by good writers like Miller and Kevin Smith, some real agency. “Guilty Pleasure” is part nostalgia trip, part fight book, and an excellent exploration of the relationship between Matt Murdock and Karen Page.

“Fan of a Fan” is more grounded in the current Secret Wars titles and is set in the continuity of Felipe Smith’s Ghost Racers, a universe where various Ghost Riders fight monsters and each other in an arena. This story has white hot thrills as Val Staples’ reds and yellows make Robbie Reyes and later Kamala Khan’s fight against the monstrous Klamagon truly hellish. Along the way, Smith parodies the oversponsored natures of NASCAR and F1 races with Kamala offering Robbie the equivalent of a hot dog and Slurpee before the whole crowd. However, this awkward moment unleashes a badass, platonic team-up as Smith uses Kamala’s size changing powers and lots of speed lines to give a readers a one page fight for the ages. And instead of going the cliche route, the fight ends in Kamala declaring them “Crossover buddies”. Felipe Smith shows that team-ups between teen heroes don’t have to fraught with unresolved sexual tension and can just be  fast-paced, friendship filled slugfests. (Some fans will inevitably ship Kamala Khan and Robbie Reyes after this story though.)

“Misty and Danny Forever” written by Princeless‘ Jeremy Whitley and with gorgeous art from newcomer Gurihuru looks at what happens when high energy, kung fu fighting superheroes settle down, get married, and have a kid. Most of the story is Misty Knight and Danny Rand (aka Iron Fist) coming to terms with some of the tensions in their marriage with the help of long time friends Colleen Wing, Luke Cage, and Jessica Jones. Whitley’s writing is realistic 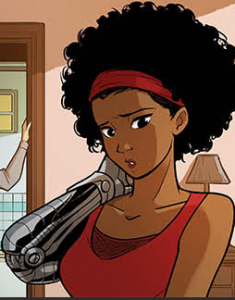 with some gentle humor poking at the arguments long term couples get into. And he closes out the story in classic Iron Fist and Misty Knight style with martial arts, dinosaurs, and cuddling on the couch watching Bruce Lee stories showing that you don’t have to go on fancy dates to be a strong, lasting couple.

The biggest highlight of this story and probably of the anthology as a whole is Gurihuru’s art and colors. She draws hair effortlessly as Misty Knight goes from a curly up-do to braids as she gets more relaxed around Danny. Her characters have bright, expressive eyes, which adds to the emotional weight, especially when little Lucy Knight-Rand tells Danny that she loves him with an Iron Fist chibi doll in her hand. Gurihuru also seamlessly transitions to action with an extra yellow flame to show Danny’s “iron fist”, and the cross cutting panels show how skilled a team they are as fighters. With dinosaurs, cute kids, a chat about Bruce Lee films, and a nice reconciliation scene, Whitley and Gurihuru truly craft a romance masterpiece. 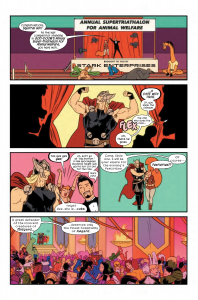 hilarious and fanservice filled story of the bunch. The basic plot is Squirrel Girl beating all comers to be Odinson’s date to a big superhero soiree. Of course, nothing is as it seems, and in the course of three pages, Squirrel Girl dances a tango, stops some accidental arson from Sunfire, names Odinsons’ abs, and rides down the Bifrost in a squirrel-drawn carriage. Along the way, Anka puts some real work into his crowd scenes and pays tribute to a variety of queer pairings in the Marvel universe, including Ms. America and Kate Bishop, Speed and Prodigy, and even Namor and Northstar. (There’s also one Silver Age-y one that makes perfect sense.) He and Bennett craft a quickly paced, funny, and sexy (Odinson is a serious beefcake.) story that is set in the fun version of the Marvel Universe.

“Happy Anti-Versary”  by Katie Cook has a cute concept and character designs, but falters in execution. It’s presumably an anniversary scavenger hunt set up by Wasp for Ant-Man (Hank Pym), but with the art filled thought bubbles and loads of narrative captions, it’s a tiny bit hard to follow. Cook does have a nice sense of whimsy, and fun facts about insects, Central Park, and silly Avengers-related puns abound, but it feels like a series of mini-sketches instead of a coherent story. The art is endearing though, especially the bug versions of Pizza Dog (from Hawkeye) and Black Widow obviously.

With four great stories and one mediocre one, Secret Wars Secret Love #1 is definitely worth picking up as it looks into a variety of relationships from platonic to struggling marriages and even ones that will make long time Marvel fans smile. This is a comic that will bring all generations of Marvel fans together and is filled with humor, heart, and a nice variety of art styles. (Gurihuru’s Danny Rand/Misty Knight is the cherry on top though.)