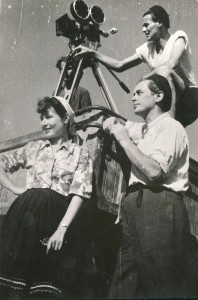 Visual studies have long been relegated to the fringe of cinema appreciation. A mainstay of early cinema of attractions, today these films are often appreciated solely for their historical or social value rather than their visual or artistic merits. In 1927 Dutch filmmaker Joris Ivens took the streets of Paris to make his short film, Études de mouvements à Paris. The film is not necessarily spectacular in any way; its construction is practical, its focus familiar and its legacy relatively non-existent but it remains a strong model for the basic appeal of cinema.

Though not too familiar with his other work, Ivens’ films made in the 1920s all fit with this vague model of “showing” rather than “telling”. Even in films where he featured characters, they seemed to exist beyond the frame of reference of any story and were pawns in his visual creation. At least during this period of his career, it is cinematography that interests him above all. His early films were focused on industry and mechanics. Études de mouvements à Paris is short, but manages to bring to the forefront the “architecture” of the car. Shot from the street level and his wife (and famous photographer), Germaine Krull’s apartment, he allows us to see as many different perspectives on the car as possible. Even the design of early vehicles showcases the man within the machine, suggesting the strong relationship between man and his creation as they become one and the same.

This focus on the minute is impersonal, there are no characters and Ivens is clearly more interested in the assembly of many cars and people in a single place. His shots emphasize a collective, which focuses both the swarm-like movement of the mob, but as well as the individual personalities and practicality of each individual vehicle. Movement becomes the defining factor of both the individual but also what drives forward the collective. The editing may not have the same level of complexity and nuance as those of the Russian avant-garde but his work shares similar ambitions and goals. It is no surprise that he was a proud communist and that would be invited in the 1930s to make a film for the Soviet Union. By the time Ivens died in 1989 he had made over 40 films. 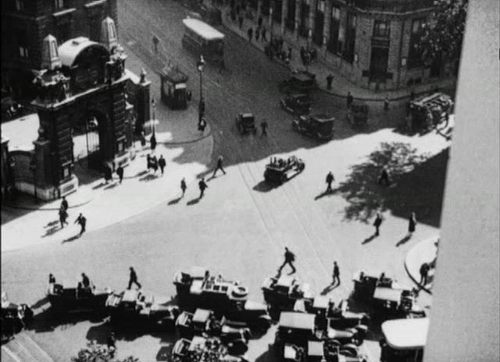 The film “study” is not entirely forgotten in the world of film, the City Symphony Films are still talked about with much fondness and many experimental filmmakers still utilize the techniques and intellectual approach of the visual study. Even narrative film has interludes and “attraction” based showcases that veer on studies on form and movement. Perhaps the most potent example in recent years , is Helene Cattet and Bruno Forzani’s visual and aural study of the giallo film, Amer (2009). Absent almost totally of dialogue, the film works in a three-act structure to explore different subjectivities of a single character in her life. Each sequence motivated by a sense of tension and dread as caused by the amplification and abstraction on the cinematic (rather than narrative) qualities we have come to associate with the Italian horror film.

Fascination with the cinema seems to be part of an instinctual attraction to movement. In the early Lumière brothers film Baby’s Dinner (1895), which is an early version of the home movie where Louis Lumière and his wife attempt to feed their infant, the audience was apparently captivated not by the action of the figures but rather the wind playing with the leaves in the background. We should not resist the impulse to record what the other arts cannot, we must hold onto the ability to capture the smallest and the widest motion. The ability to point the camera at something mundane and create something extraordinary is part of its magic and should not be taken for granted.