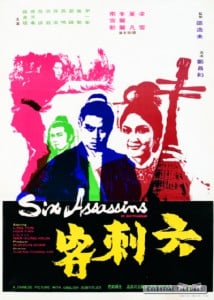 Written and directed by Jeng Cheong-Woh

Not all is well during the time of the Tang dynasty. The emperor’s cold-hearted brother, Lord Zheng Gui Li (Yun Il-Bong), spends his time visiting various fiefdoms and smaller such lands with the intent of bribing its tenants for food and money. In the event of resistance, occupants are immediately slain without mercy. Arriving at the domain of Lord Ding Yuan (Chen Feng-Chen) proves fateful. The latter calmly, diplomatically refuses to cough up provisions, resulting in his execution to which his followers take much offense. Minister Cui Yin (Shum Lo), equally obfuscated by the killing and an upcoming royal edict that is to exempt Zheng from punishment, concocts a plan with one skilled warrior, Mu Jun-Jie (Ling Yun) and five other novice fighters (among them the delightful Lily Li Li-Li, who sadly does not end up doing very much in the film) to take back what’s theirs: honour.

Korean import directors, rare as they were at the time, have a phenomenal track record when applying their trade within the Shaw Brothers studio system. Jeng Cheong-Woh’s stamp is the most noteworthy, two of his films standing out as among the best of the entire studio canon (The Swift Knight from 1971 and Five Fingers of Death from 1972). Not only was he a true talent, he also demonstrated just how prolific he could be by directing two films in 1971, the second being Six Assassins. While it is extremely difficult to dislodge Five Fingers from the number-one spot on his filmography in terms of quality, Six Assassins comes close, which counts for a lot.

Where Cheong-Woh continuously impresses is in his ability to direct stories with a level of patience that is rarely considered in other martial arts films of the era. He is never in a mad rush to get plot points across, nor does he necessarily give too much weight to the importance of the action scenes themselves. Granted, they are there on full display in Six Assassins, but what the viewer can easily recognize is that the story and how it affects the characters matters just as much as  the higher-octane sequences. Case in point, unlike a ton of Shaw pictures: this one does not open with a frantic action scene that is only later explained. Rather, a brief bit of opening narration explains the context of the era, who is in power and who this vile Lord Zheng Guo Li is before, offering a prime example of how far he is willing to go to instill his tyrannical influence.

Following the senseless murder of Lord Ding Yuan, several scenes are devoted to making plain what the societal and political ramifications of the act could be as well as hinting at the weak backbone of the would-be powerful political figures tasked with producing an edict to settle the matter. The fact is, if the arrived decision is to compensate Ding Yuan’s estate in worthy fashion, there is less of a reason to assassinate the culprit, an idea that in all likelihood would not be considered in the scriptwriting process of other Shaw adventure flicks. The film comprises many a scene in which actors are allowed to emote, think, and communicate to one another like regular human beings. These moments are slow, even quite tender at times. There is no showy acting practiced by any of the cast members, Chen Feng-Chen gives the most highly accentuated performance as the villainous lord, although his distinction emanates mostly from sinister stares than loud boastful claims. Cheong-Woh is an advocate of story first, aesthetic to create mood second, and action third. Obviously, all three elements are applied in harmonious manner as to create a palatable viewing experience for action junkies. Even so, there is definitely something to his touch that expresses an artistic vision as opposed to simplified workmanship.

What action scenes exist also provide some colourful moments of creativity. A man’s head is not merely smashed against a table, but smashed through a table. Another victim is not launched against a brick wall, but through the brick wall. A hapless prisoner of Lord Zheng Gui Li is tortured with a series of whiplashes, each strike against his bloodied back echoed by a jerky shaking of the picture frame (at a Dutch angle, no less). Patience can be a virtue just as speed and efficiency when it comes to action. One can have characters immediately run at each other, swords clashing loudly at the first sight of the enemy. Conversely, as seen multiple times in Six Assassins, two imposing foes can take a moment to size the other up, waiting for the absolute best moment to strike, much like samurai. Such moments of deliberate pacing enable the director and his art department to set the stage with undeniably expressionistic, very noir-like lighting: faces shrouded in shadow save for their rage-filled eyes, the metal of their swords glinting in what little light pierces nearby windows.

As is the case with his other two aforementioned kung fu films, Jeng Cheong-Woh elevates the material to an impressively artful level. At its core, Six Assassins is yet another story of revenge against ignobility, par for the course. When in the capable hands of a special director however, it can look, sound and feel as though one is watching a very different sort of movie. If there are fans of Shaw Brothers out there who have still yet to discover Jeng Cheong-Woh’s oeuvre, that hole in their viewing must be filled at the earliest opportunity.