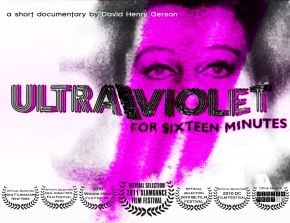 For our next Slamdance 2011 interview, we’re dipping into the documentary category with David Henry Gerson and his short doc, Ultra Violet for Sixteen Minutes. Gerson’s film first screened at Slamdance on Saturday January 22nd and will show again Tuesday January 25th. If you were lucky enough to have already seen Ultra Violet for Sixteen Minutes, you’ll be hankering for more insight into the 16-minute doc. If you haven’t seen the film, keep reading, and I dare you not to be curious.

Synopsis: Ultra Violet, mistress to Salvador Dali and muse to Andy Warhol, reveals in this sixteen-minute documentary her untold tale of spiritual rebirth and her iconic perspective on fame, art, and religion. Includes rare photographs from her past, and Andy Warhol’s screen-test of Ultra Violet from 1965.

What are some of your favorite films/directors?

Bertolucci’s “The Conformist.” Godard’s ‘Breathless.’ I grew up watching “The Ten Commandments” – that has to be my first love of film.

How on earth did you come up with the idea for this documentary?

Ultra Violet and I had spoken for a while about doing a documentary about her. I was very intrigued by how she had lived a relationship between art and religion – so I set out to try to use her life to compare an idolization of artists to that of the Church. She was Salvador Dali’s mistress, and a key member of Warhol’s factory in the 1960’s. Then she became a born-again Christian and ultimately a Mormon. So I was just curious as to whether there were any similarities between Warhol’s Factory say and the Mormon Church.

How long did you talk with Ultra Violet? And what was it like spending time with her?

Ultra Violet is a very graceful woman. Very interested in the world, completely compelling, and thinks about things from a very unique perspective. We met over several months before a camera was ever brought into the relationship which is perhaps why she is so candid in the film. Did you really have Ultra Violet sit “without moving” for a full 16 minutes? What was it like to be in the room for that?

Yes. Really it was more like 18 minutes. When I decided to come to shoot her I first projected Albert Maysles film “Dali’s Fantastic Dream” which he had given to me. In fact I asked him before shooting this film if he had any advice – he said, “shoot her as she is in real life, not just a talking head.” So when I arrived I showed her his film to see what memories it might jog, then we spoke for a while. I told her just to do whatever she would do naturally if I weren’t there and so in the midst of discussing God with me she goes to get an old purple bra and starts to play with it, finding a means to “recycle” it. After about an hour and a half of interviews, building trust the whole way, I asked her to pose for the portrait. She sat for the full 16 minutes in the chair looking into the camera. I began to zoom in and dissect her with my camera, trying to find abstractions in her figure, in the lines of her skin and pearls and folds of her dress. I felt that if we were to speak of those things greater than the flesh and the here and now I might use extreme abstract close-ups of her flesh to try to find something more eternal. It was very peaceful, focused, connected, present and intimate to be in the room for that screen-test as it was just her and I in her penthouse apartment on a lovely August New York day.

Is there anything you can share with us that you wish had made it into the doc but that you weren’t able to fit?

No. It has all I wanted. I did shoot her going to her Church of the Latter Day Saints and had some great footage of her putting on long white gloves while getting in her art deco elevator then strolling down the streets of New York with a white dress, gloves and white umbrella, but ultimately I decided that I wanted to just have the confines of one moment in her apartment. A portrait of one slice of time. When I think of Andy Warhol predicting that in the future everyone will have their 15 minutes of fame, the first thing that comes to mind is Youtube. Do you think that with today’s viral video phenomenon, Warhol’s prediction has come true? Does Ultra Violet watch Youtube?

Ultra Violet is on Twitter and Facebook – follow her. I cannot speak for her about Youtube. All I can say is I feel Warhol celebrated the worst aspects of our culture in his obsession with popular culture, fame and celebrity and yet there is a democratic elegance in YouTube that perhaps is the fruition of his prediction.

What do you hope people will take away from your documentary?

I have watched this film close to a hundred times now. Each time when she speaks of the purpose of life as “coming closer to your true nature” I am inspired by her words. I hope people will continue to think of this film many times after they’ve watched it and that they might reflect on their own egos, ambitions, and purpose in light of her experience.

Are you currently working on any film projects?

My next project is called ‘American Standard,’ and it is a short narrative film about a tragic relationship between two young alienated Americans whose inabilities to communicate lead to mistrust and ultimately explosive reactions.