Home
Entertainment
Shaw Brothers Saturdays: ‘The Sword and the Lute’ ends its trilogy, but is also one chapter too many
Prev Article Next Article 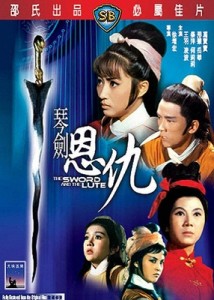 The Sword and the Lute

After Temple of the Red Lotus and The Twin Swords both emerged onto the Hong Kong cinema scene in 1965, showcasing several brand new, soon to be insanely popular actors moulded by Shaw Brothers studios, among them Lo Lieh, Jimmy Wang, Ivy Ling Po and Chin Ping, director Hsu Tseng-Hung and writer San Kong removed themselves for 2 years from the world of Scarlet Maid, the Gan family and the fantastical poisonous lute before finally concluding the trilogy of films in 1967. By this time Jimmy Wang was a powerful name in the industry, appearing in numerous films and having starred in one of the studio’s most famous adventures, The One Armed Swordsman, with Golden Swallow to come shortly thereafter, which may in part explain why in this third and final chapter he is more of a supporting character than a leading man.

While many of the characters viewers visited in the previous instalment, The Twin Swords, return for The Sword and the Lute, some are, as previously stated, relegated to playing second fiddle behind either new characters or others whom the first and second films had not explored with very much depth. The same villains from the predecessor return (or at least it appears to be the same villains given that many are played by the same actors), led by Master Wen (Lee Wan-Chung), Chief Wei Feu-Hu (Cheng Miu) and the latter’s daughter, Wei Mei-Er (Lily Ho Li-Li). The subtitles in the previous film described them as the Red Lotus gang whereas in this case they are the Flying Tiger gang, so for all that is known they are not, in fact, the same gang, but Shaw Brothers often toyed around with its casting process like this, having the same actors and actresses return in future films but not exactly play the same people, Gordon Liu’ cameo in Shaolin Mantis being a prime example. What does carry over from the Twin Swords with regards to story is that the antagonists are on the prowl for the mystical, deadly Phoenix Lute, which heroine Scarlet Maid (Ivy Ling Po) entrusted in the hands of Lianzhi (Chin Ping) and Gui Wu (Jimmy Wu) to take away to a far away safe place. Misfortune befalls them as Master Wen outsmarts the two protagonists, taking away the Phoenix Lute (which, when played, launches an endless series of poisonous darts) right under their noses. Some familiar faces join along to help out in the quest to retrieve to coveted weapon, most notably young Jin Hsiao Ling (Petrina Fung Bo-Bo), who posses a special sword which can cut through any metal and her uncle Shen (Yueh Hua), while a new character, played by a familiar face, enters the fray, that being the thief Tu Ying (Lo Lieh, who previous character actually died in Twin Swords).

If the above plot synopsis did not help anyone in familiarizing themselves with what transpires in Sword and the Lute, the reader need not blame him or herself. While the middle chapter in the trilogy did have a somewhat messy plot which made it difficult to consistently grasp the purpose of various character decisions, at least there was a simple overarching plot which functioned as the proverbial glue that held everything else together. In this third film, the director nor the writer succeed much at making the story all that interesting, or cohesive for that matter. It really, truly is a case of a bunch of characters running around from place to place for reasons which are all too frequently only half explained. The villains even take a embarrassingly silly detour en route to their ultimate goal which is to wipe out Scarlet Maid and the Gan family. At one point they actually have the prized lute in their possession, yet the daughter of the leader, Mei-Er, convinces her brothers in arms to go back into the protagonists camp in and try to steal the Seven Years Stone, which is the only antidote to the lute’s poison. In fairness, the character’s brother has been inflicted by the instrument’s poison during a previous battle, but that rash decision derails their entire plan. What is worse still is that on many of the Flying Tiger gang’s ensuing attacks on the heroes, they do not even bring the lute along with them to serve as a weapon. Seriously? And they call themselves bad guys…

The script is nowhere as focused as it was in the previous movie, which also hurts the plot points concerning the side of good at times. Jimmy Wang and Chin Ping and not as prominently featured this time around, but even when on screen, they are rarely doing anything of interest. What is difficult to comprehend is why these films refuse to make the most impressive protagonist, Scarlet Maid, a more important figure. She did not do very much in Twin Swords until late the story and even in this film the viewer has to wait 40, if not 45 minutes before she becomes a major force. On a more positive note, the heroes who do eat up more screen time are fairly entertaining. The young girl Jin Hsiao Ling ends up being one of the more interesting characters in the movie, proving to be charismatic, intelligent and equipped with a deliciously dry sense of humour too. Lo Lieh has appeared in so many films this Sound on Sight column has reviewed it has become difficult to keep track of them all. The man rarely gave a poor performance, and he does not disappoint here either. Admittedly, there is not much on the page for him to work with, but he is a charming fellow and can coast on that.

Director Hsu Tseng-Hung unfortunately did not save the best for last. Even his camera work lacks ambition for the most part. Credit where credit is due however, Hsu does provide a few moments of distinctive style, the most obvious which springs to mind being when little Jin climbs up the side of a building with the camera place beside her and follows her upwards, always keeping her in the middle of the frame, very much like what was done in the old Adam West Batman television series whenever the dynamic duo climbed up the walls of skyscrapers with their bat rope. It is a neat little visual gag, and there are a couple more along those lines in Sword and the Lute, but for the most part the film operates on a very plain level. The presence of some very talented cast members and the drive which encourages Shaw Brothers completists to see the entire trilogy are almost all the reasons that can see this movie earn a recommendation, but not much more than that sadly.