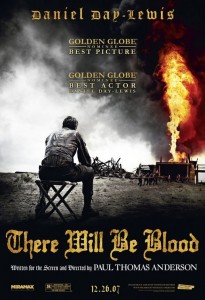 Dissonant strings buzz malevolently, rising from the audio depths and as a shot of uninhabited terrain in the American West is shown onscreen, they glissando eerily in contrary motion. As the string buzz subsides a solitary man is shown working in a dark underground shaft, his pickaxe coarsely breaking through the silence.

Released in 2007, director Paul Thomas Anderson’s There Will Be Blood (henceforth referred to as TWBB) has already been awarded the status of a modern classic by critics and fans alike. Adapted from the novel “Oil” by Upton Sinclair, the film charts the rise of oil tycoon and dark horse, Daniel Plainview (Daniel Day-Lewis).  For the film’s score Anderson enlisted Jonny Greenwood  (a member of the band, Radiohead) after being impressed by the musician’s previous orchestral work. In fact, a portion of the TWBB score was taken from Greenwood’s 2005 BBC-commissioned suite, “Popcorn Superhet Receiver” and from another Greenwood-scored film, Bodysong (Pummell, 2003). In one interview, Anderson noted that in order “to make a film, the final big collaborator that you have is the composer. Jonny was really one of the first people to see the film. And when he came back with a bunch of music, it actually helped show me what his impression of the film was.”

In much of the film there is little dialogue and a restraint to the characters that leaves a lot unsaid, and it is Greenwood’s score that acts as an emotional compass for the viewer/listener. This is most notably the case where misanthrope Plainview is concerned; a man who prefers to concern himself with matters of business and speaks little of his past. The small fragment of musical material used at the beginning of the film states briefly much of what is to become of Plainview and the world around him. His quest for oil and the riches it endows corrupts his mind and allows a certain evil to enter his body born of the barren Western expanse. The strings that emerge from the film’s soundtrack before we first see Plainview on screen act as an invocation of this evil, signifying that Planview’s impending discovery of oil is not in fact a fortunate find but a highly corruptive one.

The string writing used by Greenwood for much of TWBB score is, by Greenwood’s own admission, influenced by the work of Polish composer Krzysztof Penderecki, whose compositions “Polymorphia” and “De Natura Sonoris No.1” both appear on the soundtrack of the Stanley Kubrick film, The Shining (1980). Both The Shining and TWBB are concerned with a male protagonist who becomes increasingly disturbed over the course of the film, compounded by being in an isolated setting that allows him to become dangerously introspective. The jarring string orchestration employed in both the films’ soundtracks symbolises the constant mental duress these men are under and are so unnerving and filled with tension at points that it almost feels that we as listeners could eventually snap too.  It should also be noted that the convergence of vast space and dissonant music within TWBB is also reminiscent of another Kubrick film, 2001: A Space Odyssey (1968), particularly within 2001’s “Dawn of Man” segment in which the atonal vocal oscillations of composer, György Ligeti’s Requiem are employed. After Plainview convinces the naïve patriarch of the Sunday family to sell him land he knows to be oil-rich at a bargain price, Greenwood’s cue, “Future Markets” kicks in. The cue is initially more conventional in its tonality than the previous scoring but its effect is disconcerting nonetheless. A relentless and driving ostinato motif is heard in the string bass section that comes to short abrupt halts before eventually being joined by pizzicato (plucked), upper-register strings. As Plainview is shown onscreen coveting other properties the strings become more frenetic, mirroring his tireless efforts for complete control and ownership of any available land in the Little Boston area. The use of the rather ‘twitchy’ sound created by the pizzicato effect could also be construed as a musical mimicry of Plainview’s already fragmenting mind.

When the montage ends, the strings take a sullen turn as Planview’s son, Henry and his friend Mary Sunday watch men working for Plainview survey the land around the Sunday’s home. When Mary asks Henry what they are doing and how much money can be made, Henry appears saddened, as if he is aware of his father’s exploitation of the Sunday family. This sadness is reflected in the melancholy turn of the “Future Markets” cue and also indicates to the audience that though being brought up in the oil game, Henry is not the cold, hard businessman that his father is.

One of the film’s most interesting cues occurs in a scene in which an accident on a rig causes Henry to become deaf. The cue does not appear on the release of the film’s score and is in fact an adaptation of the cue, “Convergence” from the Bodysong score. The cue features various percussion instruments that enter one by one, slightly off the beat and in keeping with the overall orchestration of the TWBB score, strings have been added. When Plainview recovers Henry from the rig and runs him to safety the cue begins, a cacophony of disconnected percussion that emulates Plainview’s panic over his son’s condition. Though Henry pleads for him to stay, Plainview chooses to tend to the fire on the rig and joins the other men as the percussive score continues its incessant ode to chaos. As the fire rages on into the night onscreen, discordant strings emerge on the soundtrack and the oil-slicked face of Plainview grins maniacally at the inferno. When a business associate asks Plainview if Henry is ok, Plainview replies matter-of-factly and without shifting his gaze, “No he isn’t” and continues to be consumed by the sight of the fire and the ‘whole ocean of oil’ that it represents.

Daniel Plainview is a man whose misanthropy and greed corrupts everyone around him and leaves him alienated and lonely. Greenwood’s score for TWBB, though harsh and maniacal in places, also features sparse, reflective moments that seem entrenched in a deep sense of sadness.  Taking cues from the ebb and flow of Planview’s unsound mind, Greenwood’s score is a fitting musical accompaniment to the portrait of a man who in amassing an incorporeal fortune becomes metaphysically barren.