So you can call this part deux of my cops and robbers best of movie list! I think I read somewhere that one of the top male fantasies that didn’t involve their grade eight French teacher with a ridding crop was to be involved in some sort of “caper” with their buddies! Because crime is cool! Thanks in part to one or some of the films listed below!

*Like last week don’t pay too much attention to the order! 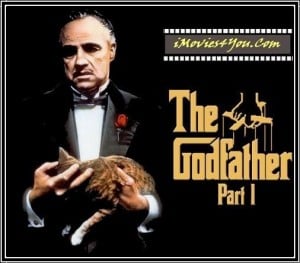 It’s The Godfather! Entertainment Weekly calls it the best film ever made. The American Film Institute ranks it number two behind Citizen Kane. It is without a doubt one of the very finest films in cinematic history. The final shot (The door closing on Diane Keaton) is more debated on by academics that Hamlet’s mental state. There are way too many positives to list here, save to say, if you haven’t seen it – see it! If you have seen it – see it again! For me, a close second! Based on the book Wiseguy by Nicolas Pileggi. I love this film. I love the performances, I love the story, and I love the music. It succeeds where so many other films fail. By telling a story over many years. So that we the audience get a sense of who these characters are from there meager beginnings to their tragic ends. Goodfellas highlights the Golden age of the mob in the US, through the eyes of mobster turned informant Henry Hill (Ray Liota), a wonderfully conflicted character of Shakespearean proportion. Robert DeNiro and Joe Pesci round out three of the best wiseguys in the history of mob movies! The use of montages and voice over’s give the film a 360 degree narrative that grabs your attention like a pistol pointed at your head! I really think this will be the film that history remembers Quentin Tarantino for. Beyond simply being a great film, it re-invented the crime movie genre. A no-holes-barred, cartoon violent, depiction of gangsterism in America! The film that pulled John Travolta’s career out of the grave on put QT on the map as a major Hollywood player. Pulp Fiction will go down as one of the very top films to come out of the US in the 90’s. The film’s dialogue alone is a reason to watch this amazing picture. The style, the performances, and look of the picture is something uniquely QT. It’s like the picture of a beautiful woman on the cover of a porno magazine on a motel room nightstand…dirty and intoxicating at the same time. You don’t want to look, but if you do you can’t take your eyes off it! The flagship film for the new generation of American Gothic. A true classic! One of my all time personal favorite films! Albert Finny shooting up his own house with a Tommy gun to the Irish tune Danny Boy will go down as one of my very favorite moments in movies! The acting in this film is nothing short of spectacular! The entire cast is so strong, anchored with brilliant performances by Albert Finny, Gabriel Burn and John Turturro, and brilliant is not a word I throw around very often! A magnificent script that keeps you guessing and the heightened cinematic style give the film an almost graphic novel feel. This picture slips through the cracks for a lot of people. I wish I could give it a higher number on my list but the first three are just too solid. Francis Ford Coppola’s follow up to his 1972 masterpiece. This film serves as both a sequel and a prequel to Coppola’s original film. The film chronicles Vito Corleone (Robert DeNiro) coming to America and becoming involved in the Mafia and his son Michael Corleone (Al Pacino) becoming comfortable in his late father’s station as head of the family. This picture is huge in scope with many different plot lines and story points crisscrossing over the films 200 minutes. The time lines keep shifting from the present story of Michael and that of his young father coming to power in New York City so far in the past. In a way it’s deftly handled by Coppola bringing so many different stories together as he were a conductor in front of some massive orchestra! But I always found the film exhausting and a little unruly, like that friend who’s a lot of fun when he’s drunk at midnight but you still have to tell him to get off your roof and go home at 4 in the morning! Hence it lands at number 5! I actually like this movie more than Pulp Fiction. I think Pulp Fiction is a better film but I like how raw Reservoir Dogs gets. Apparently people were walking out of the theatre at Sundance due to the violence. A harbinger of things to come with it’s machine gun dialogue and 70’s soundtrack, the Elvis Priestly of films makes an impression! The film also is responsible for so many memorable lines and performances. Steve Buscemi made an interesting observation on the first day of shooting “how everyone was trying to out Harvey Keitel, Harvey Keitel”. The film was shot on an extremely low budget with most of the actors wearing their own clothes. This cult classic is another great example of how necessity breeds invention! Donnie Brasco is like The Shawshank Redemption. Everyone loves it! F’get about it! I had an acting teacher once who told me the hardest role to play was a low-status character. Someone weak, who was always below the rest of the cast, the reason being; as the actor, your pride starts messing with your head. So you start doing things that the character wouldn’t do. Al Pacino does not have this problem in this film. He’s great! And so is Johnny Depp, as Joe Pistone the real life undercover FBI agent who brought the mob to it’s knees! This character being one of his best straight up, non Tim Burton, non art-house roles. This film could have made my list last week, as it is kind of a cop movie about a cop, doing cop things. But the thrust of the story in the film is the mob. So I put it here. All in all a seriously solid flick but It just kinda does what a lot of other films do. So even though it’s based on a true story, there’s not a huge fresh factor to this film. That’s why it only comes in at number 7. Somehow I managed to actually see this film on video (months after it was out of the theatres) without anyone telling me the ending. The reveal at the end was one of the best movie moments I have ever had. Lots of know-it-all douche-bags will say they saw that ending coming a mile a way. (These are the same assholes who tell kids there’s no Santa Clause). I was not one of those. The ending blew my young mind! I remember sitting there with the film credits rolling going “no f**king way” over and over again. This isn’t really a mob movie, just a straight up crime thriller. The performances are fantastic across the board but Kevin Spacey was particularly good as Verbal Kint. The role won him his first Oscar for best actor in a supporting role. Christopher McQuarrie gave us one of the slickest pieces of screenwriting in film history. There are better movies out there, but I can’t think of what they are right now! Maybe an odd choice but I have always thought this was an excellent picture. It is also one of the very first American films to be heavily influenced by French New Wave cinema of the 1950’s and 60’s and would ultimately lead to what many consider the golden age of American film in the 1970’s. Arthur Penn used shifts in tone, and fast editing cuts to present the warped reality of these two characters as they embarked on their blood soaked journey across Middle America. The cartoonish violence and obvious sexual overtones of the film where considered new territory for many film makers of that generation. So ultimately this film helped break new ground and usher in a new and exciting time for American film. Why this and not Scarface you ask? Keep reading…I really like this movie because it kind of tells the story of the OG who should be dead but isn’t. He’s learned the errors of his ways and been reformed. Only to find out that the world of which he was a part won’t let him leave. An almost unrecognizable Sean Penn, and notable performances by Luis Guzman, Viggo Mortensen and John Leguizamo make this movie a must see! Critically the film was only given a lukewarm reception partly due to Pacino’s recent Oscar win (for Scent of a Woman) and some saying the film was simply a re-tread of some of De Palma’s earlier work. It’s not the best, but it’s better than a lot of the rest. Number 10. I don’t like it! There! I said it! I know that there will be people out there who will want to take a chainsaw to me because this film is not on the list…but it’s my list! This is a film I’ve watched a bunch of times but every time I see it I feel like I’m digesting a baseball steak! I think Tony Montana is one of Al Pacino’s least interesting performances he simply yells and sneers for a hundred and fifty minutes. He starts the film as a poor homicidal maniac and ends the film as a rich homicidal maniac! There’s no real journey for me. Michelle Pfeiffer is about as interesting as watching paint dry and Robert Loggia is…Robert Loggia! I know, I know, It’s a comment on power and greed flourishing under a free market economy, Cuba versus the US blah blah blah…I’m bored.

Why not Casino? (1994, Directed by Martin Scorsese)

Great flick! There is nothing wrong with this movie…it might be a bit long but that’s about it! But it really follows the exact same template of Goodfellas. I think it might fall under the category if it ain’t broke…but there simply wasn’t room on my list for two movies with pretty much the same cast, doing pretty much the same thing. Sharon Stone is absolutely fantastic! Bar none the best performance of her career!