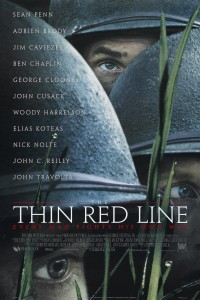 It is nearly impossible to quantify within one’s own history what key moment or memory contributed to the formative restructuring of his or her proclivities. As consumers inundated by sound and images daily, and as appraisers of media, entertainment, and art, often a single piece of visual data is enough to symbolize an entire paradigm shift. For film aficionados, it can be pat to say that a single movie is responsible for that transformation. More precisely, it is usually a collection of scenes or images or performances that adhere themselves to our minds, remaining unstuck as knowledge and maturity seem to take those fragments and coalesce them into an ideal, so much so that when we see a film that represents that ideal, it is but a mere culmination of years and years of film and brain conditioning.

For years I had appreciated the medium of the moving image but had remained reticent in broadening my tastes beyond the popular. A few accidental rentals and risky viewing habits had engendered an interest in alternatives. By the summer before my senior year of high school, I had already made my first two short films, yet had no primary influence for my work. I had just been mimicking my way through the art form, stealing what looked reasonable without any frame of reference to what I appreciated or who I was.

I remember first seeing The Thin Red Line as a kid in 1999 when it was released on home video. My father, ever the quintessential Dad, was often responsible for our movie selections, and I’m sure he surmised by the fiery cover art and sprawling cast that the film was just another war epic. It wasn’t unusual for my family and me to watch movies on school nights, and we did just that, from the blazing light of dusk to the cricket chirping dark. 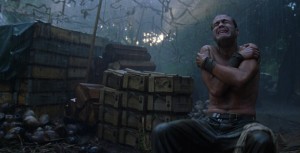 Six years after that viewing, I could only recall images: the enigmatic opening, the suspenseful taking of a hill, and the impactful death that closes the film. Essentially, I had remembered pieces that could’ve belonged to any war movie. But upon researching the film so many years later and discovering its onerous reputation, I was struck by my initial viewing experience–that if The Thin Red Line was anathema to the champions of the war picture, what had compelled me and my family to sit through it for three straight hours?

Only until I revisited the film in the summer of 2005 did I grasp the scope of its ambition as well as the pull of its emotional power. John Toll’s picturesque anamorphic cinematography contrasts beautifully with the brutal combat. Hans Zimmer’s score is not a drum march but a ticking clock on the soundtrack, marking the descent from the calm to the storm. The editing provides an expansive structure for the myriad of stellar performances: Jim Caviezel, Sean Penn, and Elias Koteas to name a few.

The Thin Red Line is the film that pushed me over the proverbial edge from being a movie fan to a film fanatic. Consciously or not, I had been yearning for a film and a filmmaker to be my conduit to my own artistic expression. Just as the film had been a culmination of years and years of film and brain conditioning for me, so too was it a culmination of director Terrence Malick’s career. After two impeccable entries onto the 70’s film scene with Badlands and Days of Heaven, Malick essentially disappeared from the film world, only to return from a twenty year hiatus with The Thin Red Line. What had compelled this man to resurface? What had beckoned him? Given the film’s oblique nature, one could never sense the personal allure that James Jones’ novel provided Malick, an artist who attended Harvard and taught philosophy in France and who is clearly more interested in man as a destructive extension of nature than as a mouthpiece for an anti-war message.

The answer, however elusive, may lie in the film’s images. Images as representations of real things: a line of soldiers marching into the lush jungle of Guadalcanal. Images as canvases for music and sound: a sensitive soldier’s idyllic memories of the wife he left behind. Images as manifestations of the ideal: Melanesian inhabitants of Guadalcanal joyously singing and clapping. In The Thin Red Line, that ideal is man’s coexistence with nature, represented through the character of Witt (Caviezel), a Private whose peace with his past, with himself, and with his horrific surroundings elevates him above his more fearful comrades. The film is less a testament to the valor of combatants and more a poem to man’s spiritual transcendence above his perilous physical plane. Malick, understanding the ephemerality of the image, strives not to paint in broad strokes despite the universality of his story and the uniformity of his characters, which act as pieces of one giant soul, or “features of the same face,” as the film puts it. Instead, he treats the opposing forces of man vs. nature as counterparts. One cannot exist without the other. And as a result, his lengthy yet measured editing–which is mostly lyrical but can be chaotic, forceful, and impressionistic–becomes inseparable from the visual intent of the images.

It is parts standing for the whole. We are not supposed to bask in every beatific shot, feel suspense at every gunfight, or identify with every character no matter how big a celebrity inhabits him. With The 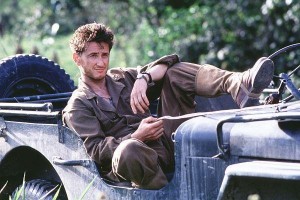 Thin Red Line, we are not being forced to feel right away but to experience and accept. So many films are constructed around the judgment of the viewer. So many films need acceptance. Very few films just exist. With Malick’s film, we are not asked to feel awe, fear, or empathy. But we may just feel all of those things once we’ve grasped the grander picture.

For me, that picture seems larger than I could have ever imagined. From Terrence Malick, I was able to find Andrei Tarkovsky, Michaelangelo Antonioni, Krzysztof Kieslowski, and a host of other filmmakers who ask nothing of their audience, only that they be experienced. Film is often about the joy of discovery. The Thin Red Line, a film which took me at least five viewings to fully absorb, is an experience that transcends the images that contain it. 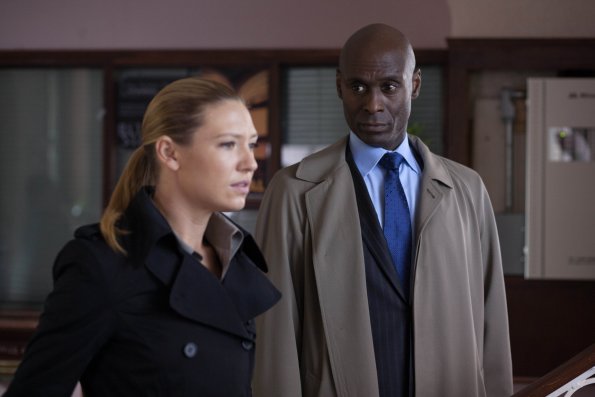