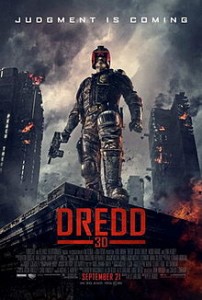 Based on the very popular and long running British comic strip, Dredd 3D is fuelled by highfalutin violence, nonstop gunfire and hyper-stylized 3D action sequences. But any creativity that went into formulating the premise never found its way to the script writing stage. There isn’t much plot or even stakes for that matter. Never once do we sense our titular hero, nor his rookie sidekick are ever in any danger. Everyone is disposable; citizens are mowed down by bullets and nobody cares. So why should we?

As in The Raid: Redemption, the majority of the pic takes place within a high rise building that has been co-opted by gangsters. Dredd is an American law enforcement officer trapped inside and forced to infiltrate his way to the 200th floor and take out the chief bad guy, a strange dame named Ma-Ma, played with over-the-top zest by Lena Headey. The first 30 or so minutes of Dredd is an electrifyingly kinetic and frenetic action flick stacked with a need for speed car chase. But once the cops are locked into fighting their way out of the block, the film simply becomes a tiresome series of silly confrontations. Where as The Raid kept the action non stop, fresh and exciting, showcasing some of the finest martial arts sequences since Fist of Legend, Dredd isn’t anything more than gun shot after gun shot. We basically sit and watch Dredd either dodging or sheltering himself from bullets for 95 minutes. Even worse, Ma-Ma is so insignificant and their final confrontation so anti-climatic, it leaves us wondering how such a nondescript criminal could even come into power. There’s a serious disappointment here. Screenwriter and producer Alex Garland is no strangers to dystopian sci-fi pictures, having previously scripted 28 Days Later, Sunshine and Never Let Me Go. Those movies have characters, story, plots and heart, all of which is sorely lacking in this soulless adaptation.

Dredd is less a character than an image. Karl Urban, stuck throughout the entire film acting from beneath a helmet, plays the hero: a cop, judge, jury and executioner. His jaw and mouth remain visible but his eyes are hidden beneath a visor limiting his performance and masking any bit of charisma and Urban is left delivering hissed one-liners in a scratchy monotone fashion. Than there is Olivia Thirlby, an actress who thankfully doesn’t wear a helmet because it would interfere with her character’s psychic abilities. Sadly, she’s left to carry the entire emotional weight of the film. Another disappointment. Visually, Dredd is impressive, and the deadpan humour helps inject some life into the one dimensional characters. Cinematographer Anthony Dod Mantle, a key player in contemporary digital aesthetics, adds a slightly artistic edge to the proceedings and the throbbing score helps elevate the action. But Dredd is a one night stand, beautiful but dull, and not something you’ll ever need to see again. When the credits roll, you can be forgiven a sense of dissatisfaction because unlike classics such as John Carpenter’s Escape From New York, there’s no personality here – and guys like Karl Urban don’t hold a candle to the likes of Kurt Russell. Thus the major problem with action movies post 1990: There are no iconic characters like Snake Plissken. Dredd 3D is clearly receiving critical acclaim. Yes, it is better than its predecessor, but that isn’t saying much.