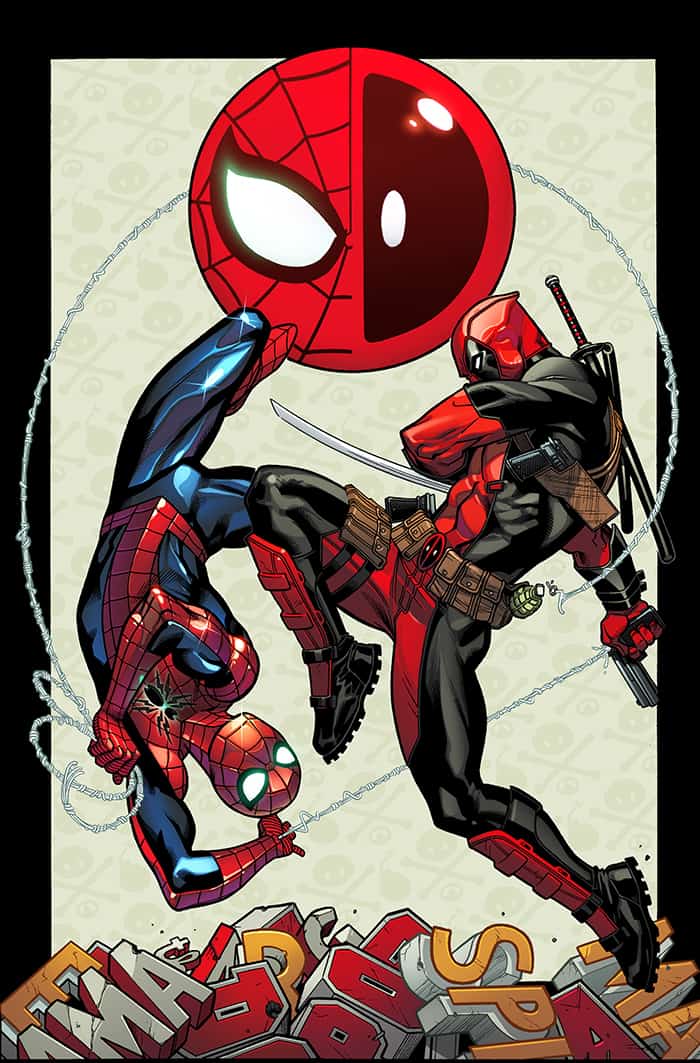 Put two cash cows together, and what do you get other than really expensive hamburgers that give talented NBA players their names? Spider-Man/Deadpool #1. In this team-up of two big time Marvel characters with similar senses of humor, yet vastly different moral compasses, writer Joe Kelly and the art team of Ed McGuinness, Mark Morales, and Jason Keith pit the two red costume wearers against Hydro-Man, who has absorbed all the sewage in New York City, the Mindless Ones, and Dormammu, who is behind it all and gets some hilarious lines about taking acting lessons from famous Greek playwrights. McGuinness and Morales’ art is fresh, clean, and easy to follow so you can laugh at the characters’ jokes and not scratch your head at awkward poses or setting shifts. Keith’s colors are brash and bold without overwhelming the art, but he makes sure to give red, yellow, and black their due especially when the shooting starts.

As the first writer who made Deadpool break the fourth wall in 1998, Kelly is an old hand at writing humorous, self-aware dialogue and also at poking fun at Marvel’s current status quo. Like the fact that Deadpool is a bonafide Avenger, celebrity, and has his own merchandising company, and that Spider-Man is the bodyguard for CEO/new member of the 1% Peter Parker. (So basically Iron Man in the 1960s, or Batman in the Batman Inc days.) Kelly also playfully touches on Deadpool’s pansexuality in the opening scene with some blushworthy double entendres involving katanas and Spider eggs and gives him an unrequited love for Spider-Man that is sure to kickstart dozens of fan fics. Your mileage may vary whether this is adorable, or if Kelly is poking fun at Deadpool’s sexuality. I think it’s the first because Deadpool holds up Spider-Man as his heroic ideal because he does the right thing, but also makes silly puns and poop jokes and goofs off along the way. This is despite Spidey being a little bit of a jerk and leaving him on the top of a building while his lower half regenerates. (Before this happens, he does get a great crack at Wolverine saying his healing factor makes the dead Canadian’s look like a “hemophiliac”.)

See also  “Somewhere” – A skewed vision of the cult of celebrity 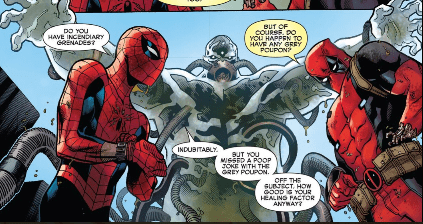 Ed McGuinness and Mark Morales were  excellent choices for the art for the wild and wacky Deadpool/Spider-Man #1 as they can switch from adorable to hilarious to disgusting at the drop of a hat. Or just draw really slick superhero art with Morales’ sharp, well-defined inking. (Deadpool would definitely make some kind of a dirty joke out of those last two sentences.) Other than the sheer hilariousness of Deadpool putting brains (or grenades) in the Mindless Ones and getting them to complain about pay or job requirements, the fight scene between Deadpool, Spider-Man, and the Super Saiyan form of Hydro Man (As previously seen getting you slightly damp on the Spider-Man ride at Universal Islands of Adventure.) is an artistic highlight of the comic. There is the fetid green coloring on Hydro Man from Keith, the visual humor of Deadpool rummaging in his pouches for grenades, and then Spidey asking about Deadpool’s healing factor before a blockbuster explosion. Keith’s disgusting colors add a fun (or annoying) gross out factor to what could just be a standard superhero team up with Spider-Man and Deadpool simultaneously planning and being skeeved out.

Spider-Man/Deadpool #1 is filled with jokes, sexual tension, gross out gags, and slightly self-aware supervillains galore all from the wacky mind palace of Deadpool legend (and basically daddy) Joe Kelly. Ed McGuinness and Mark Morales’ art is slick with a side of disgusting and helps the story move on at a bouncy pace. There may be an overreliance on bathroom humor due to this issue’s villain, but there’s also jokes about Uber’s labor practices and some great puns for folks whose eyebrows are glued on higher than the rest of us. Early on, there seems to be a gap between the Hydro Man battle and Deadpool accidentally teleporting him and Dormammu to Hell, but by the final page all his revealed along with the series’ hook. It’s another Deadpool redemption story, but this time with Spider-Man as his goofy guardian angel. But his path isn’t as simple as that last sentence. (Deadpool does have a handy morality choosing gadget that is McGuinness’ best visual funny.)