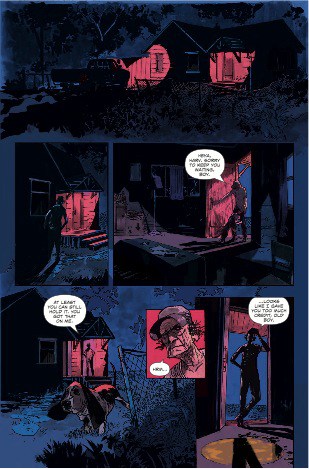 Written and Letters by Ed Brisson

The hitman sub-genre has seen a bit of an upheaval as of late with some excellent films being produced that ooze in style and excitement. John Wick, released in 2014, brought back some much-needed rise in properly world building with unique characters since perhaps Drive. The thing about John Wick that makes it really stand out is that it really feels like a comic book. If you cannot wait for the sequel to come out, The Last Contract #1 is the beginning of what looks to be a good fix for that withdrawal.

The main character, known only as ‘The Man’, was a one-time big shot hitman who now finds himself in the comfort of small town Cumberland, British Columbia where the only worry he has is his dog Harv. Upon returning home after a meal at a local diner, The Man is confronted by a biker hitman, revealing, all too easily for The Man’s liking, a hit has been made out on his name. The Man leaves Cumberland to confront the string puller, Burrell, only to find out that both of them are in fact strings being dangled by the same mysterious person. A blackmailer has information, a list, that would put both Burrell and The Man’s lives in danger were it to be released. It now becomes The Man’s priority to find this blackmailer in the hopes of remedying this dilemma.

Ed Brisson’s script is heavy on exposition for this first issue, but keeps the action flowing from multiple locations so never really feels like the information being fed is too much. Brisson’s dialogue snaps into place with each of the characters introduced, showing the level of comfort he has with laying out the key pieces to this layered crime story. Brisson also takes on the role of letterer, making sure to balance a relatively dense script and not overshadow the strong visuals. 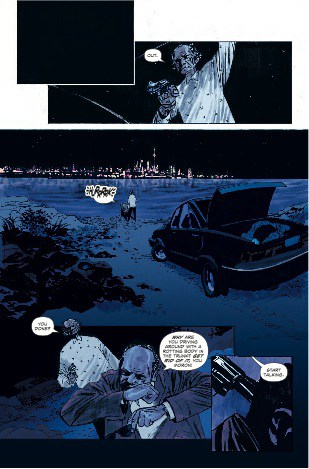 As much as the story on the surface of a retired hitman being forced to confront those of his past fits a repeated pattern of hitman stories, the comic medium allows for this relationship of a unique visual style with Brisson’s script to present a fresh world. Lisandro Estherren’s pencils create a sense of a true lived in world with each of the dirty environments mirroring the seedy nature of the criminal underworld. Estherren’s plays with lighting, enhanced by the painterly, pastel-like colours of Niko Guardia, to get a true sense of the noir style. Estherren’s rough lines greatly capture the weathered, experienced faces of the characters, each stare witholding a memory of the past.

There are many playful, beautiful frames that evoke a real sense of style by every member of the creative team. Early on, a single frame of The Man returning to his home shows his car’s headlights shining round orbs of red on the exterior of the house, foreshadowing the splashes of violence to come and the dark shadows that continue to surround The Man as a reminder that his past will never leave him. Reinforcing this connection to the past is shown a couple times more, such as when The Man kills the lone hitman, a string of small frames reveal themselves behind him, presenting themselves as images or moments of the past in which the same action has caused flashes of memories to rise. Another great moment occurs when The Man confronts Burrell on the outskirts of the Toronto skyline. Burrell tosses his cigarette into the lake, only to be swallowed by a fish that floats up dead to the surface. All this occurs as Burrell talks of the blackmailer’s ability to bring about information that was once thought safe to the dangerous place upon the wrong person’s eyes. Brisson’s dialogue with Estherren and Guardia’s visuals formulate this truly pure cinematic moment.

The Last Contract starts off with a heavy foot to the pedal, creating a world quite quickly with characters that have a real sense of history. It is very difficult to take a hitman as a character and produce a story that feels fresh and exciting but it appears that this title is in more than capable hands.