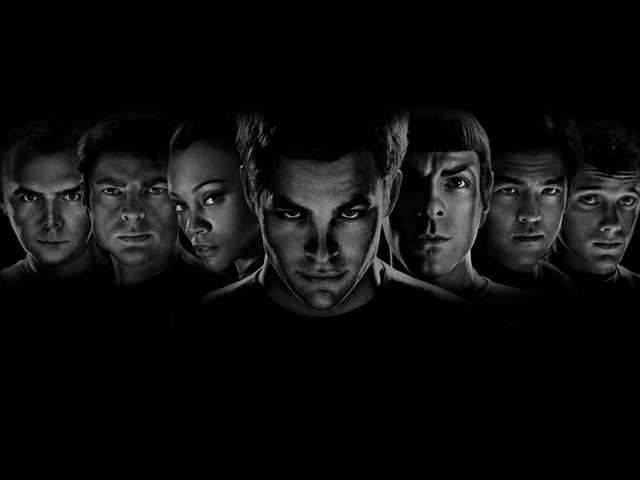 The greatest challenge of taking on any known cultural property in the world of film is that of fulfilling the “fan-service” requirements held by the stalwart fans of said property. Take too many liberties in pursuit of making a more interesting film, and you’ll attract ire (Ang Lee’s Hulk); hew too closely to the source material and find your film straightjacketed by its own content (Watchmen). Superproducer and occasional director Abrams finds a novel circumvention for his big-budget reboot of the creaky old franchise, and exploits it as the starting point for a new and surprisingly engaging cinematic universe.

Trek takes place before any of the previous filmic incarnations of Roddenberry’s stories, opening with a sequence that depicts the origins of James T. Kirk (Chris Pine) in over-the-top fashion, with his father dying at the hands of a renegade Romulan force as newborn Kirk and his mother are spirited away. We rejoin Kirk as a young adult joining Starfleet Academy, striking up a friendship with Leonard McCoy (Karl Urban) and working his way up the Academy ladder. Three years on, after cheating on a rigged simulation designed by Spock (Zachary Quinto), he finds himself grounded just in time for a reappearance of the ship that destroyed his family, comandeered by the vengeful Nero (Eric Bana, unrecognizable).

The most surprising aspect of Abrams’ reboot is his willingness to embrace the concept of an “alternate timeline” – since Nero and his massive vessel have traveled from the future through a wormhole, their actions have altered the Star Trek universe, freeing Abrams and his screenwriters to move away from the established canon while retaining the original series’ characters and overarching concepts. This could have been a disastrous move in the hands of a less assured figure, but Abrams has a clear idea of what his Trek looks like: sleek, fast, and exciting, more action-oriented but not braindead. Numerous sequences suffer from “origin story syndrome” – particularly the overwrought opening sequence, and some of the more overt nods to longtime fans are more blatant than they needed to be, but as the foundation for a new series, the film is undeniably solid.

Much of Abrams’ success can be ascribed to shrewd casting. Chris Pine is a pleasant surprise as Kirk, exuding both cockiness and genuine qualities of leadership without resorting to a rote Shatner imitation. Zachary Quinto’s Spock is really the heart of the film, however, and Quinto ably portrays the character’s struggles with his conflicting Vulcan and human tendencies, as well as suffering the loss of his home planet at Nero’s hands. Karl Urban absolutely nails Dr. McCoy, and Simon Pegg adds expert comic relief as wily engineer Scotty, who emerges in the film’s second half. Bana doesn’t truly connect as the villain Nero, mostly thanks to his general underdevelopment – he gets one scene late in the film to explain his motives, and it feels shoehorned.

Whatever the superficial flaws, Star Trek is the year’s first successful blockbuster, an unapologetically entertaining sci-fi thriller that exudes a rare sense of vision missing from most summer fare. There’s no sense that the script was labored on by thirty people (though it may very well have been) and there are no bizarre leaps of logic or unnecessary plot points floating around – though I do wish they’d found another way to introduce Future Spock (Leonard Nimoy) that didn’t involve a massive coincidence. Star Trek presents a fully-formed universe loaded with promise; let’s just hope Abrams and co. don’t settle for a simple action/sci-fi franchise, instead expanding from this riveting reboot into new and deeper realms.