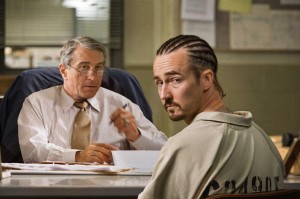 An unusual hybrid of Hollywood casting and production values with a serious dose of left-field character choices, Stone, from director John Curran (We Don’t Live Here Anymore, The Painted Veil), comes as a bolt from the blue in a season full of dreadful would-be Oscar bait and third-rate genre fluff. Its failures are that of execution and not imagination, and in and of itself that’s a minor miracle given the cast and the many opportunities on hand for formulaic plot developments.

The setup, for instance, is familiar. Robert De Niro, in what’s both his least bombastic and best role in over a decade, plays Jack, a nearly-retired corrections officer who ekes out an existence of quiet desperation with his long-suffering wife (Frances Conway, of course). One of the last cases on his docket is that of an arsonist nicknamed “Stone” (a cornrowed Edward Norton), who is up for release after eight years in the clink. Stone recruits his wife, Lucetta (Milla Jovovich) to help get the old man on his side, apparently by any means necessary.

What follows is a surprisingly subtle meditation on a familiar question: what separates the just and the condemned? The film’s startling opening sequence (second only to The American‘s opening gambit in the audience-alienation sweepstakes), as well as De Niro’s convincingly shut-off performance, posits Jack as the kind of man who acts decently when it suits him but is capable of terrible manipulation. The ritual coldness with which he treats his wife is heartbreaking but not over-the-top; Conroy and De Niro effortlessly conjure the kind of shared apathy that often accompanies decades joined at the hip. Norton’s con might seem familiar at first – the streetwise hustler with a spiritual bent – but his attempts at redemption are flawed by design, reflecting a man who doesn’t know how to improve, only that he wants to. The movie’s MVP, though, might well be Jovovich, whose Lucetta is a genuine Hollywood anomaly. She seems to exhibit genuine affection for both Jack and her husband, but also needs to look out for herself given her partner’s extended absence.

Brimming with sexuality and narrative ambiguity, Stone stumbles a bit when it makes mainstream concessions. The intermittent radio broadcasts Jack plays in his car as he drives to and from prison, with Limbaugh and Graham proxies talking over the finer points of salvation and damnation, underline the movie’s themes in a distractingly broad fashion. Additionally, a motif surrounding a Christian sect that promotes the aural realm as “God’s vibrations” does provide an accurately amorphous source of comfort for Norton’s confused spiritual journey, but it proves a little too goofy to support some of the more intense emotional beats it’s paired with. (It does neatly tie in with the film’s nifty electroacoustic score, though.) The appearance of a gun in the third act is also a form of concession the movie probably doesn’t need, though its deployment, once again, does not unfold in the expected fashion.

Most blessedly of all, writer Angus MacLachlan (Junebug) doesn’t ply the audience with easy answers as the film settles into its messy end. Unlike The American, which sold out its winning atmosphere with a typical thriller climax, Stone follows the lead of its characters and remains elusive, surprising and more than a little dark.