Home
Entertainment
Festival du Nouveau Cinema ’12: ‘In Another Country’ shows some comedic smarts while being a light diversion
Prev Article Next Article 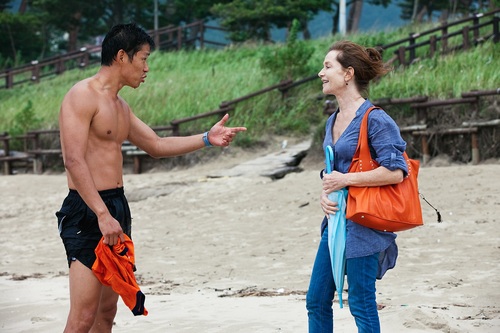 Writing one story, with a concrete beginning, middle and end is not the simplest of tasks to acquit one’s self with. It requires dedication, skill, inventiveness and of course proper language skills if dialogue is to play a prominent role in the evolutionary process of the tale. Now, think about using the same setting and more or less the same characters and developing three separate stories, all with their own little twists and turns, yet each echoing what transpired in the previous stories and, in some ways, foreshadowing what might happen in the next.  That is the very concept which drives the latest film from South Korean director Sang-soo Hong, in which he teams up with renowned French actress Isabelle Hupert, a combo many would describe a match made in heaven.

In Another Country opens with a young woman (Jung Yoo-mi) and an older lady (Yoon Yeo-jeong) sitting at a table on the balcony of a summer house. Their stay in a quiet, seemingly dilapidated little Korean town along the ocean is obviously against their own wishes, as can be extrapolated from their squabbling about when might be the first opportunity to leave. In order to take her mind off the matter, the girl secludes herself back into the summer home and begins to write ostensibly three variations of the same story, each with their own particularities. A French woman (Isabelle Hupert), who is at one time a filmmaker, in another story the unfaithful wife of a businessman arriving to meet up with her lover, and in another still a happy go lucky, slightly  awkward divorce.  Each story is set in the same, sad town seen in the opening. A well built life guard (Yoon Jun-sang) appears in all three, while various other actors might appear in one or two stories, but not always playing exactly the same roles (Kwon Hae-hy, Moon So-ri, Yoon Yeo-jeong, the latter whom returns from the opening segment, only that in the third and final story she is Isabelle Hupert’s friend).

It would be an interesting experiment to take a poll of what people’s expectations were with regards to Hong Sang-soo latest endeavour. He is, after all, quite a respected filmmaker, just as Isabelle Hupert is herself highly regarded for her craftsmanship as an actress. Their pairing might have several people salivating at the prospect of discovering what brilliance should emerge from their collective talents. In Another Country might not exactly live up to such lofty expectations, yet let that not discourage hopeful movie goers. To its credit, the movie, and in particular the script, does show off some smarts in how it handles the comedy for, more than anything else, Hong’s picture is very much intended to amuse the audience.

Where the direction itself seems ordinary (‘serviceable’ might be a more apt term to employ), the dialogue and character interactions more than pick up the slack. In each of three adventures, Isabelle Hupert’s characters are not fluent in Korean (nor is the actress herself), and hence she must constantly strain to get her ideas across with those she encounters, save a few individuals who take her in during the first and third chapters. On the surface, this might appear like the filmmakers are aiming for some easy jokes, cheap even. Truthfully, that is not exactly the case. Granted, comedy surrounding words getting lost in translation has been practiced for years already, so what Hong attempts in In Another Country is not new. That being said, it is dealt with some intelligence and care in this particular film. The characters are mostly quite kind and honest, and the miscommunications are for the most part light. In essence, the comedy comes off as nicer than what might be expected from a film in which sexual desire is so prominent, especially in our current day and age where sex in comedies must be as raunchy as possible. There isn’t a mean bone in the entire film and, although characters will occasionally be exasperated at how poorly things turn out, it is ultimately all in good fun. 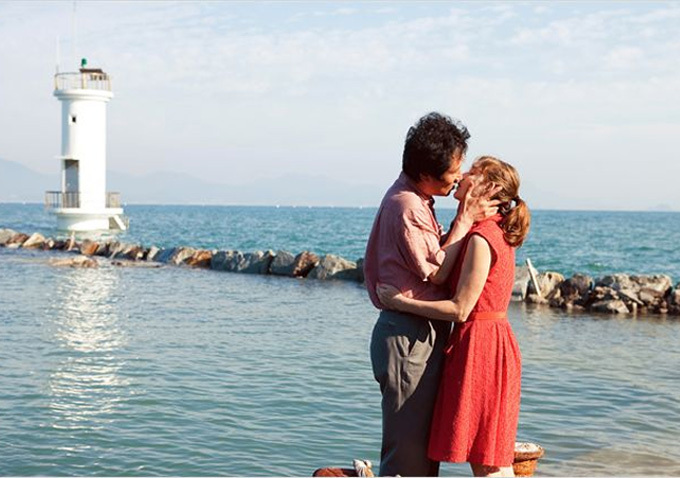 The cast is up to the task, keeping the characters as real as possible despite the limited amount of time devoted to developing them. Hupert, unsurprisingly, is in nearly every scene, and true to her form as an actress, is able to slip into her various characters with the greatest of ease. Whether she is a respected movie maker simply looking for some down time with friends, a desperate women trying to reunite with her real true love behind her husband’s back, or someone who recently had their heart broken and is now looking for any sort of bright side to life, Hupert can seemingly do it all. Moon Seung-keun, ironically enough playing yet another filmmaker but not in the same episode in which Hupert does, is a welcome presence, as is Yoon Yeo-jeong, excellent in the final instalment in the trilogy as a friend trying to comfort Hupert after the latter’s husband betrayed her.

In Another Country never aims very high, but it nevertheless succeeds in its goals. The cute moments are cute, the funny moments are funny, there is some romance, a smidgen of drama…basically everyone goes home happy.  A little on the light side? Absolutely, although should not stop people from having a good time.