Having done well at the festival back in 2013 with This is Martin Bonner, writer/director Chad Hartigan returns to Sundance with Morris from America, a mostly generic crowd-pleaser with a good amount of charm. The plot follows young 13-year old African-American Morris Gentry (Markees Christmas), as he moves to live with his father Curtis (Craig Robinson), a soccer coach in Heidelberg, Germany, and tries to learn the language and fit in. The plot and the situations that arise within don’t go anywhere that you haven’t seen them go before. Conflicts and their resolutions can be predicted from pretty far away, resulting in generic fare despite the collision of cultures inherent in the story.

The performances do go a long way in elevating the material. Craig Robinson does a convincing job trying to balance being a “cool” dad to Morris while retaining the authority of parenthood, and brings along the reliable sense of comedy he’s known for. Robinson hasn’t really dabbled in dramatic work before, but shows he has the chops to do it here. What Morris from America does have is an undeniable charisma from its lead, Markees Christmas. Christmas can charm you in any moment of the film, even when he’s getting fresh with his pillow. There’s an authenticity in how Christmas unassumingly goes through the awkwardness of adolescence and trying to find your identity in each scene. His smile is a winning one, and for what it’s worth, his Jay-Z impression is pretty spot-on. One climactic scene has him finally performing a freestyle rap that the film has been teasing at since the beginning, and Christmas makes the moment shine, rolling off the lyrics with exuberance and raw talent. While you won’t walk out of Morris from America convinced you’ve watched anything particularly groundbreaking, you will walk out of it convinced Markees Christmas is a star. 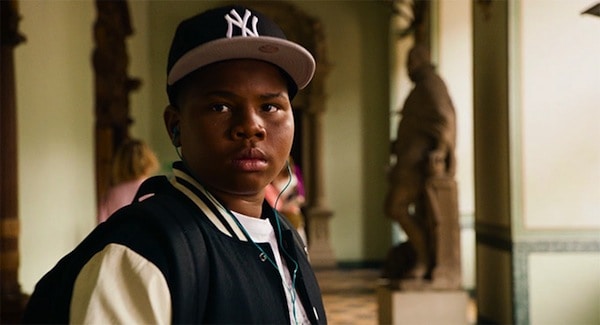 One obnoxious problem that keeps popping up throughout Morris from America is Hartigan’s problematic treatment of Katrin, a young 15-year old girl that Morris befriends and falls for. She is either there to solely exist as a romantic prize for Morris, or as a sort of quasi-villain that picks on Morris, and never as simply a human being. Hartigan either objectifies or demonizes Katrin- only one or the other. Lina Keller certainly has plenty of charm to spare, but is forced to act out scenes that extremely limit her range to regressive and sexist stereotypes.

The cinematography by Sean McElwee has a vibrancy to it. He’ll take his shots in long drags and bright colors, heightening the foreign aspect of Germany to Morris’ life visually. There’s a winning soundtrack comprised of old-school hip-hop favorites, showing Hartigan at least has good taste. Essentially, Hartigan’s film is one that is made up of many good parts, but from a script so full of clichés and stereotypes that they can only be elevated so much. It’s all very charming, sure, but that can only go so far in creating something memorable and lasting, aside from the standout performance from Markees Christmas.