This week’s episode marks the arrival of Toyman onto the National City scene, setting off more bombs in Supergirl’s life than she expects. Although the big villain-of-the-week is Toyman, the true center of the episode belongs to Winn and the lesson he learned from encountering his villainous father, which will in turn affect his relationship with Kara, changing their dynamic for future episodes.

The development of this story is presented well, albeit heavy-handedly. Having Kara relate to Winn by expressing how important he is to her both establishes the status quo of their relationship and reinforces their strong bond, so when Winn kisses Kara it raises the stakes. There are two roads from here: they could pretend it didn’t happen, or lay the truth on the table and explore where that takes them. Winn decides that he will take the latter path as he refuses to deny his feelings; this is certain to affect their friendship and challenge that status quo that was so underlined earlier in the episode, therefore making for a significant and interesting shift to the season. As strong as the emotional arc in the Winn storyline is, the other subplots have mixed results in both story development and execution.

The least significant plot follows Jimmy Olsen and Lana Lang and the likeliness of her taking a position at CatCo, putting her in very close quarters to Jimmy. The underlying issue appears to be that Jimmy doesn’t want Lana working in the same place as him, as to play into the idea of the guy who doesn’t want to see his girlfriend at work every day but doesn’t want to say that to her face trope, but it turns out this is not the case. What Jimmy reveals to Lana is that seeing her get closer to where she wants to be in her career reminds him that he is not where he wants to be in his own. This serves as Jimmy’s motivation to take a more active role and get back into the action by going for more on-the-scene assignments, because that is where he feels most alive and useful. This is a good direction for Jimmy to go and could lead to more organic reasons for him being integrated into the main Supergirl plot.

Alex and Hank Henshaw’s attempt to infiltrate Maxwell Lord’s compound and uncover what secrets lie therein is a little less successful. There’s a strange romance developing between Alex and Maxwell, and it’s hard to say whether the audience is supposed to take it seriously or not, as it’s clear they are both using the other to fulfill their own covert goals. It’s possible we are meant to believe that Maxwell is somewhat romantically inclined towards Alex which, if that is true, the reveal at the end where we learn that Maxwell has placed a camera in Alex’s purse (proving that he was merely using her to get at Supergirl) could’ve been more effective. The problem here is that at no point do we see Lord as anything more than a villain. Peter Facinelli’s portrayal of Maxwell is purely antagonistic. The writing tries to sell us on his perspective in his dinner conversation with Alex, where he tries to lump Supergirl along with the hostile aliens, but the jist comes across simply as “I’m here to be an adversary to Supergirl, that’s my motivation and that is my only goal.” Maxwell is in need of some new dimensions. 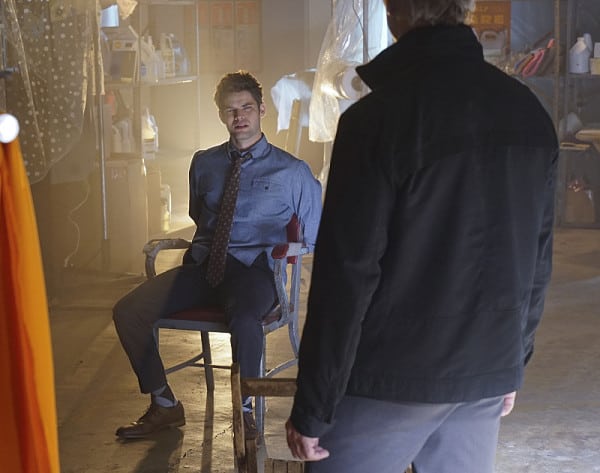 The other side of the B-plot lies with Hank Henshaw and understanding why he feels he needs to keep his alien side hidden. The treatment of Hank is a bit stronger here. The story develops much more subtly than in Maxwell’s plot, with Hank infiltrating Maxwell’s base and then being pushed to take on measures that he had hoped he wouldn’t have to anymore. There is a sense of Hank’s humanity, even though he is an alien, as he shows great regret in his actions with the guard. Although there is a sense of the writer’s clumsy hand guiding this situation, the arc is saved for the most part by David Harewood’s expressive and substantial performance. It’s clear that the only reason that Hank transforms back into his form as Harewood is to enact those key moments with the guard.

Amidst “Childish Thing”‘s covert play and lengthy stretches of dialogue writers Anna Musky-Goldwyn and James DeWille also make room to feature, to some degree, one of Superman’s somewhat notable villains, the Toyman. This iteration of Toyman is entertaining, but could have used some retooling. The fact that some of his toys are made to look like Supergirl, while visually engaging, doesn’t make much sense, since his obsession isn’t with her, but his old boss and his desire to reconnect with his son. Henry Czerny is fairly good in the role, and makes a strong first impression in the opening sequence and in the scenes where he manages to trap Supergirl in quicksand. Czerny grounds the character in his focused madness, which enables us to sympathize with Winn as he fails to see any semblance of his former father in the madman that is now forcing him to shoot a man in cold blood just as he is about to be honored in front of a live crowd.

Although “Childish Things” falls short in some areas, there are fun elements in the villain-of-the-week main plot with Toyman, as well as some significant development with some of the characters that allow room for growth and change, particularly with Winn. The relationship between Winn and Kara is a valuable one for the series, and it’s currently placed in limbo with untapped potential. It will be interesting to see how that develops in upcoming episodes.