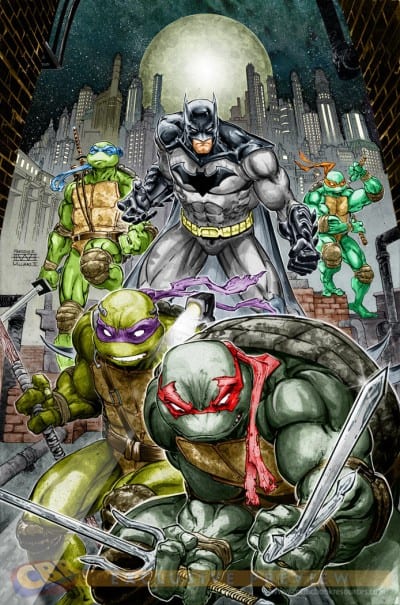 Holy shell, this book is a lot of fun. It reminds me of playing with my brother. We would dump every one of our action figures out on the ground and take turns picking one to be on our team. Regardless of whether I was supposed to be the bad guys, I always ended up with Batman on my team. I only say all of that to say that writer James Tynion IV and artist Freddie Williams II are having a lot of fun playing with these characters. It’s clear that he understands both worlds that are being represented.

The book picks up where the last issue ended. Batman and the Turtles meet face to face and exchange some punches. It’s clear that neither side knows what to think of the other just yet as each turtle tries to best the Dark Knight.

Batman is as calm and collected as he has ever been. Even when facing four turtles from a different world, he never loses his cool. The Turtles, while lost in another world, still attempt to compose themselves and do their best to take on the Bat. They attempt singlehandedly at first, then try to team up on Batman as their first efforts all fall flat. Eventually Splinter jumps in to save his sons, and they all disappear in a cloud of smoke.

There is a hilarious scene in an internet café that made me laugh out loud. While the Turtles are trying to break down what Batman is, they all have their own theories, but Mikey is beside himself with awe. The entire scene was charming.

While the Turtles are doing their research on Batman, he finds out that the Turtles are from another world, and that they must return to their own soon before the mutagen in their bodies becomes inert. If they don’t return soon, they will become regular turtles again. While doing the research, Bruce Wayne doesn’t notice that he’s been followed by Splinter.

Shredder makes another appearance, along with the Penguin. The two share a nice scene as Tynion builds upon the Shredder’s character as a growing menace.  Shredder himself knows that the Turtles and Splinter are on borrowed time and is planning to build a machine that will get him home leaving the Turtles stranded forever in Gotham.

All in all, the book was fantastic. It’s a really fun read, and the artwork is amazing. The team of Tynion IV, Williams, and colorist Jeremy Colwell captures the sheer insanity of the premise. Even though the characters shouldn’t work on a page together, Williams makes it work. There isn’t a scene in the book that looks strange or out of place. All the dialogue balances out well, so each character has something of value to add to the story. Even when the characters are dealing with their own issues and not fighting one another, the book doesn’t lose a beat.

TMNT/Batman #2 is way too much fun not to be read. When it was announced, I thought it was nothing more than a cash grab. I couldn’t have been more wrong. It’s so much fun. Williams’ art is cartoonish, but only adds to the strangeness of these two worlds colliding. Fans of both franchises should be reading this book, but any comic book fan will find joy in the silly lines from Mikey, or the terror that the Shredder seems to be. I would recommend this book to the casual and die-hard fan, it’s simply too fun to ignore.