Supergirl, Season 1, Episode 13, “For the Girl Who Has Everything”
Written by Ted Sullivan & Derek Simon, Story by Andrew Kreisberg
Directed by Dermott Downs
Airs Mondays at 8pm (ET) on CBS

“For the Girl Who Has Everything” could have easily been a season finale, as it serves as a smart reminder of the series’ progress, reinforces the reoccurring themes of family and what makes a hero, has a significant death, and resets the status quo for some key relationships. The episode smartly showcases the supporting team by having Supergirl be the one who is need of rescue after she encounters a parasitic alien organism called Black Mercy, which feeds of its host life force by offering them a dream reality, from which they never want to leave. Although the title, the iconic creature, and some story beats are taken from the original tale by Alan Moore and Dave Gibbons, the story is impeccably integrated into the overarching rogue Kryptonians plot that has been developing since the pilot.

The supporting team are put at the forefront here to explore their relationship with Kara/Supergirl by having them remark on their current status or simply reiterating her significance to them. The most relevant bond that is featured in the episode is that of Alex’s sisterly rapport with Kara, as she monologues about her history with Kara and how she came to accept her as family. The scene is fairly melodramatic, which works for tone of the show, and Chyler Leigh does a fine job selling the emotional charge of Alex’s motives in her scenes, as well as in Kara’s dream reality sequence, where she pleads for Kara to wake up and return home to Earth. As the show peels back some of Alex’s layers, it also gives her some new development, as she now has a secret that she is hiding from Kara: that she killed Astra with a blade made of Kryptonite. This secret is certain to come out sooner or later and when it does, Kara may not be too happy with Alex.

There are a few good moments with James, as well as with Winn, in “For The Girl Who Has Everything” as they scramble to help Kara. James has a strong scene where he gets to ensure that Hank won’t pull Alex out of the dream reality until she has rescued Kara. Mehcad Brooks gives a pretty convincing speech about trusting that Alex will be able to pull Kara out and that Hank should have faith in her. Meanwhile, Jeremy Jordan’s Winn is given several comedic beats to play, and is tasked with helping out the DEO solve some computer-related issues. While it’s fun to see Winn shine his geek knowledge with the super-serious DEO grunts, the truly important development for Winn comes with his return to taking on his role as Kara’s best friend, after having revealed his romantic feelings for her in prior episodes ago, which brings Winn and Kara back to their status quo. 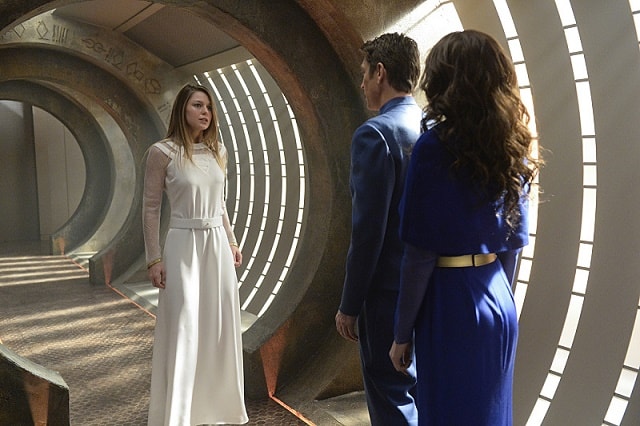 While all of the drama is placed in the Kara plot, the episode still finds time to throw some comedic elements over at CatCo with the team needing to preserve Kara’s job by having Hank shape-shift into Kara to stand in for her to assist Cat. Hank-as-Kara is always fun and there should be heaps of credit given to Melissa Benoist for her range in this episode alone; from Hank-as-Kara, to her dramatic turn from not believing her dream reality to giving into it, up to her intense rage stare once she’s pulled out of the dream, each sequence is a great example of what a versatile talent Benoist is. Another remarkable and refined performance can be found in Laura Benanti’s portrayal of Alura and Astra, respectively. Benanti has been great throughout the series and has been given some varied material to play, from wicked badass soldier, to kindly mother, to a cold hologram, and at times playing one interacting with the other. Benanti is simply an enjoyable presence on this series and it’s a really questionable and surprising twist when it is revealed that she’s been killed.

See also  The Amazing Race Ep. 21.3, “There’s No Crying in Baseball”: A surprisingly resilient Gary and Will survive the dreaded Double U-Turn

Although the main plot cleverly adapts the Superman story for the Supergirl series, one must admit that there’s some clumsiness in the teleplay, with some overstated dialogue, as well as some not-very-believable character turns that could’ve been better finessed. The worst of these comes when Alex has to convince Max Lord that he should help save Supergirl without any real incentive other than to allow her to fight off the real Kryptonian threat. If Max Lord believed that Supergirl was actually helping against a true menace, doesn’t that make her on the side of humanity in his mind?

Despite that less-than-credible motivation Max Lord is actually pretty well utilized here, putting his skill as someone who is tech-savvy to good use, albeit with an obnoxious wit. “For The Girl…” also does a really great job at bringing the “Black Mercy” alien organism to life, with this version looking very much like the Dave Gibbons design. Krypton is also featured well, giving the audience some much needed insight into the world Kara once knew. Dermott Downs’ direction is also notable for its careful deployment of shakycam to match Alex’s emotional intensity in key scenes.

“For the Girl Who Has Everything” does more than simply adapt a classic Superman story and gender flip the protagonist – it also marks a turning point to the season that shows that the series has found its feet and is really coming into its own.