It’s strange that this season/miniseries of The X-Files has aired out of production order (“Home Again,” this week’s episode, was the second episode produced and the fourth that has aired) considering how well “Home Again” functions as a bridge between the exposition dump of the premiere and the strange, one-off fun of last week’s “Were-Monster” entry (which was the third episode produced). “Home Again” doesn’t exactly hit all the notes it’s aiming for, but it at least attempts to do two important things that The X-Files is capable of doing on a good day: 1) establish an emotional connection between the audience and the central characters and 2) scare the hell out of people.

Best-of discussions regarding episodes of this series can go one of many directions, but it’s hard to argue that the most viscerally upsetting episode was anything other than “Home” from season four. “Home Again” recalls that episode, of course, in its title, but even if it isn’t anywhere near the same level of disturbing as “Home” was, it captures its horror elements well while having something to say about family (and it also features a brutal scene set to an upbeat tune—“Downton,” in this case). Band-Aid Nose Man, albeit an absolutely ridiculous moniker, is not someone you want to encounter in the dark, and several corpses that populate the episode are a testament to that. The creature, which is a variation on the Tibetan Tulpa (a being that is simply willed into existence), has an excellent design that is accompanied by external sensory cues, such as the buzzing of flies and the stench that chokes the people around him. He’s not simply horrifying to look at; he’s a menacing presence that stalks “Home Again” like Silent Hill’s Pyramid Head. That the episode doesn’t offer up a satisfying resolution for his terrorizing gives Band-Aid Nose Man a kind of urban legend feel—someone kids might talk about around a trash can fire. 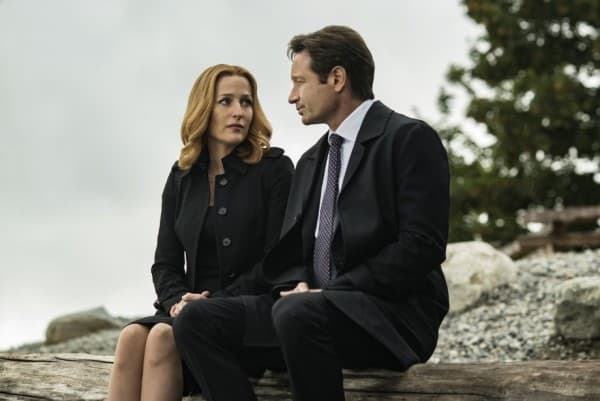 Unfortunately, the way the rest of the plot is forced to orbit Band-Aid Nose Man takes a little bit away from the overall impact. The concurrent storyline of Scully’s mother (and, by extension, hers and Mulder’s absent son) is one that probably works better in isolation. There really isn’t a need to tie it in here because of how loose it feels, essentially coming down to something like “Oh, this killer represents how we’re responsible for the things we create and/or discard and, goodness, isn’t that a lot like how we treated and continue to think about William?” It works slightly better than that within the episode—through the sheer power of Gillian Anderson’s acting ability—but not much better. Still, the heart is in the right place with this plot, and these episodes as a unit seem to building up to some emotional climax having to do with it. It’s just hard to get behind scenes that are relying too heavily on a past that isn’t quite as interesting as the future of these characters. Margaret Scully is mostly wasted and her reunion with her estranged son, Charlie, which might have been mined to better effect, is an afterthought in the face of reminding us that Mulder and Scully still carry the weight of William with them.

Really, “Home Again” could be divided into two episodes—one that focuses more on the environmental and social commentary that comes with the existence of Band-Aid Nose Man (especially regarding metropolitan treatment of homeless people) and one that is basically just a drama having to do with the grief and guilt of Scully losing her mother and child. That would allow for moments like the episode’s conclusion, in which Scully pours her heart out to Mulder (she calls him Fox!), to resonate better and for the comedy of the other half of the episode (“We can eliminate any 76ers, because those guys can’t find the rim”) to feel less at-odds with where the episode is trying to go emotionally.

At the end of the evening, though, “Home Again” is still technically executed well, with director/writer Glen Morgan knowing exactly how to frame certain sequences to wonderful effect. The episode recalls the creepiness of early entries of The X-Files by virtue of its incredibly memorable villain, and the steps it takes in advancing the overarching plot of the series will hopefully be paid off better than they’re set up, given how much movement needs to happen in such a short amount of time. With two episodes left, The X-Files has definitely found a groove, and the familiar tone and atmosphere it has settled into makes it hard to believe that the series proper took more than a decade-long break.