On this week’s episode, Supergirl deeply explores the dark side of Kara when she is exposed to a new type of artificially created Kryptonite that heightens all her ill-gotten thoughts and brings them to the surface. Although we had seen Supergirl appear to go bad before in a previous episode, the effect to her public image were never tarnished enough to have any true consequences to her standing with National City, and “Falling” actively makes an effort to show that despite the title of “hero,” she can and will be held accountable for her corrupted actions. The episode begins by establishing Supergirl’s hero status in National City with Cat’s appearance and endorsement on The Talk, her supporting a young fan from a bully, and lastly with Senator Crane’s (one of Supergirl’s former detractors) seeing her as the DEO’s super special agent, all to set her up for a great fall as the title suggests.

The conception of having multicolored Kryptonite shards that effect Kryptonians in different ways is one of the source material’s more far out yet interesting elements to mine story from, and Supergirl does well with the idea and builds on what the show has already established. On this series, the Red Kryptonite is developed by Max Lord in the same way that Bizarro was created, which is referenced in the episode to make clear that the Red K (as Lord calls it) is grounded within the science that this world has in it, which is likely best not to think too hard on. Connecting the Red Kryptonite to Lord works here in that it allows for an equally science-latent resolution that could simply explain away the effect of the Red K after the fun of Kara going bad is done.

This entire season has been an impressive showcase of Melissa Benoist’s talent as an actor, allowing her to play a variety of extremes of Kara’s persona and she is exceptional in sequences where she is belligerent Kara during her Red K influence as she is performing remorseful Kara post extraction. There are also notable shades of theatrical acting in her wicked laugh and evil stare during her speech with Alex, which seems to draw from Laura Benanti’s performance as Astra, something that speaks to how Kara intentionally displays her dark side to mirror her Aunt in order to get a rise out of Alex. 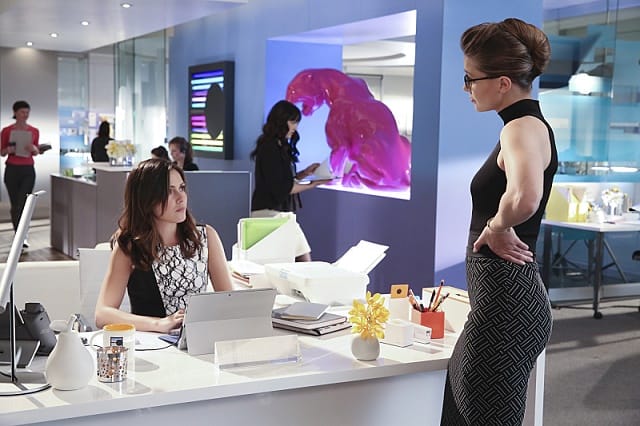 What makes the episode worthwhile besides Benoist’s excellent performance is how Kara’s change affects her relationship with the people around her. Her relationship with the National City is represented in her interactions with Cat, who is established at the top of the episode as the most powerful person in National City, a title that Supergirl challenges while under the influence of Red K. The sequence where Supergirl confronts Cat is strong in how it shows the reckless nature of the uninhibited Supergirl, willing to prove her power by showing that she decides who lives and who dies. When faced with this version of Supergirl, Cat is convinced that the former hero is now a threat, a realization the episode does well to scale back from past episodes where Cat would always give the benefit of the doubt. Her interaction with Supergirl as a threat warrants her decision to denounce her on television.

It’s interesting that the episode that introduces Red K is also the episode that has James Olsen become single again. It’s understandable that the show would continue to keep these two separated, and they do so in a way that not only makes sense but feels organic and true to the characters. Under the influence of Red K, Kara trash-talks Lucy Lane and it comes from a place that is genuinely Kara, and James knows it, so she can’t just brush it away as her not being herself. In the end Kara does own up to her feelings, which is a refreshing beat. This, of course, leads to the “we need space and time to be alone away from each other” speech, that these kind of will-they won’t-they romances thrive on. It’s performed well here by Mechad Brooks and Benoist, which make it compelling to see how they will go about healing their wounded relationship.

Another relationship in need of repair after the fallout of Bad Supergirl is that of Kara and Alex. There is a resentment that has been playing under the surface between the two sisters since The Pilot episode and was reiterated again in “Livewire”, wherein Kara feels undermined by Alex and unsupported, while they resolve this issue by pretending that it’s not an problem, it really is and the show knows this and now appears to be interested in examining the hurt feelings in their relationship as much as it is in showing Supergirl Kick Alien Ass!

One of the elements in the episode that has been much improved from previous episodes is the presentation of Max Lord. The show has positioned Lord to become a reluctant ally of Team Supergirl in recent episodes and it hasn’t been the most finessed transition but in this episode it sort of works. Lord isn’t the cartoonish villain that he usually is and although he is the creator of the Red K, his admission of guilt but without malice seems almost genuine, which is a step up from Peter Facinelli’s typical hammy take. Also it seems that Lord and his lab is the shows creative engine for more outlandish ideas, which Supergirl has been great at utilizing as of late.

With “Falling” the show presents the dark side of Kara with great performances and promising development that poises Supergirl to make amends for her actions that resulted in significant penalties to her image and relationships with her allies in another solid well-crafted episode.