This week, on Supernatural: Jeffrey plays with his puppy while Lucifer plays with Sam 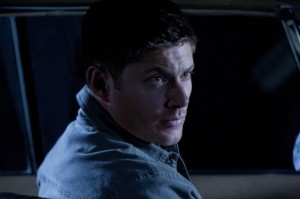 This season, and last season, Supernatural has only found significant success with its comedic standalones. Certain character through-lines have been well executed, but on a whole, the series has been at its best when going for the laugh. This episode brings a welcome return to the Supernatural of yore, eschewing humor in favor of good, old-fashioned scares.

It’s telling that, to achieve this, writer Ben Edlund takes the characters (and audience) back to season 4, with an extended flashback sequence set during Sam and Dean’s search for Lillith. If any proof were needed that the Leviathans haven’t really worked, it’s this episode- a demon is more interesting and terrifying than they are. A human feels like more of a threat. Edlund deserves a lot of credit for this, and for finding a way to tell a new demon story. We haven’t seen this before, a human wanting to be possessed, but it makes such sense within this world that when the reveal comes, it feels overdue. How had this story not been told before? Edlund is well known for his comedic chops. He created the Tick and wrote perhaps the funniest episodes of both Firefly, “Jaynestown”, and Angel, “Smile Time”, along with some of Supernatural‘s funniest, including “Ghostfacers” and “Monster Movie”. It’s great to see him do such straight up horror while holding back from his usual levity. 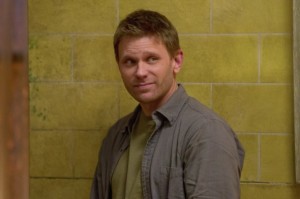 The rest of the credit goes to Russell Sams, who’s great as Jeffrey. From his initial possession scene to his scenes with Dean and his dog, to the episode’s climax, Sams keeps the audience guessing. Or, that is, he would have, if last week’s “Next, on Supernatural” trailer hadn’t blown the reveal. Much like it would seem this week’s did for the next episode, in March.  Jeffrey’s reading of Dean is apt, seeing his defeat and weariness, though this is starting to get a bit old, considering it’s the same note the writers have been playing since Dean’s run in with Famine back in season 5. Perhaps this, along with the demon’s assertion that he’ll be back, will signal a potential shift in Dean, if not the season.

The rest of the episode focuses on Lucifer (great to have you back on the show, Mark Pellegrino!)’s manipulation of Sam. Though, or perhaps because, this has been a long time coming, it manages to be somewhat underwhelming. Sam’s engagement with Lucifer feels unearned- Dean’s been in tougher scrapes than this since Lucifer started popping up in his head. They both have. Why is this the week that Sam chooses to interact? Regardless, this development was inevitable and should allow plenty of interesting new struggles for Sam as we enter the last third of the season. Dean’s obliviousness is unsurprising, of course- we’ll see how long it takes him to notice the change. 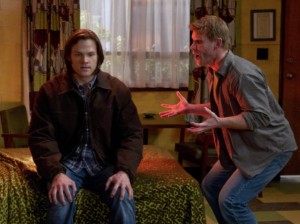 Despite the episode’s strengths, there is one rather glaring problem. Where did that devil’s trap come from at the end? It doesn’t make any sense for Jeffrey to have put it there and no one else had the time to do so. There have been enough strange occurrences over the past few episodes to chalk it up to GhostBobby or NotDeadCas or whoever is hanging around them, but the guys don’t seem surprised to find it, which is unusual for both them and the series, if this is something that will come back in to play later. All in all though, this is a strong episode, full of scares and the horror atmosphere that the series has been so sorely lacking.

What did you think of this week’s episode? Think Crowley’ll be mad this demon escaped? How long do you think it’ll take Sam to tell Dean what’s going on? Post your thoughts below!