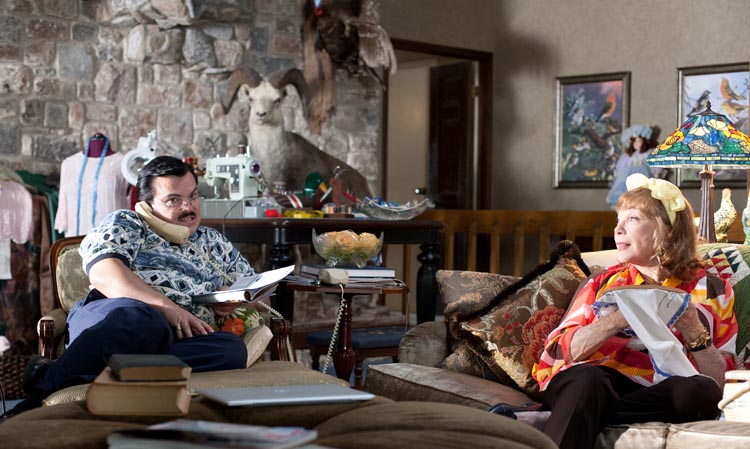 In 1996, the sleepy East Texas town of Carthage awoke to find itself embroiled in controversy – the extremely popular and gregarious local civic leader Bernhardt ‘Bernie’ Tiede had been arrested for the murder of his long term social companion Marjorie Nugent, an 81-year-old widower whose enormous wealth and spiteful demeanor had ostracized her from her immediate and extended family. As the local mortician Bernie was known around the town for his affectionate and tender approach to his services, and his graceful dealings with all members of the community, from the local theatre group to the little league team, to his lending money to local business interests, to his involvement on the civic administration board, Bernie was a pillar of the community and especially adored by the blue-rinse town elders. Although eyebrows were raised and gossip exchanged at his approaching middle age and lack of female paramours, when he started spending time with the recently widowed Mrs. Nugent (a companion some four decades older), acompanying her on first class trips to New York and Europe, running her errands and tending her house, most neighbours simply assumed he was her non-romantic associate, a testament to Bernie’s civic duty and helpful, almost angelic, good Christian nature. It was only when she hadn’t been seen in public for many months did Majorie’s family become suspicious and contact the police, unearthing a terrible murder Bernie’s motives and explanations soon came under scruntiny…

This is the case that Richard Linkater’s new comedy Bernie centres around, a return collaboration with two of his previous alumni: Jack Black as the titular Bernie and Matthew McConaughey as local sheriff Buck Davison, alongside a spiky performance from acting legend Shirley MacLaine as the doomed Mrs. Nugent. Taking a quasi-documentary approach Linklater populates the film with talking-head interviews from the town’s inhabitants, eliciting from them some hilariously phrased recollections and observations of the scandal, shining through all is their almost unanimous praise for Bernie’s goodwill and character poisoned by the unreasonable hectoring and demands of the poisonous crone Mrs. Nugent. Accompanying this is the fictional and lightly comic, almost jaunty reconstruction of Bernie’s life and crime, and Black acquits himself admirably in a restrained, almost dainty performance which is complemented by McConaughy’s egocentric yet morally assured sheriff. As a comedy, Bernie achieves the de minimus threshold requirements, and has a half dozen or so belly laughs, mostly culled from the idiosyncratic turns of phrase of Carthage’s colourful denizens (‘them boys over in West Texas have more tattoos than teeth’ drawls one memorable character) and in that sense the film is more a character study of a place than an event, Linklater uses the crime as a hook to hang his sociological picture of a place not far from his spiritual howetown of Austin. Bright and breezy, Bernie is a bountiful start to this year’s London Film Festival.