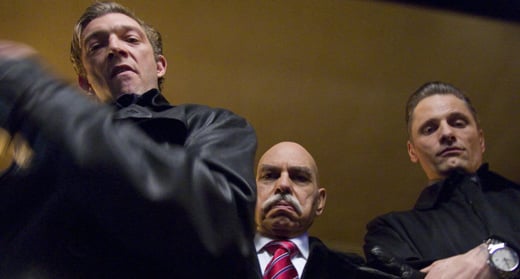 The most perilous and difficult aspect of attending Telluride – whether you’re a passholder, a guest, a sponsor, or a ticketholder – is going to the bathroom. Really. Because the great majority of the fest’s venues are assembled specifically for the event, some of its facilities are ill-equipped to deal with hundreds of rabid moviegoers who’ve been specifically instructed to stay hydrated to stave off altitude sickness. As a result, the lines are long – but as the fest’s employees are quick to reiterate, waiting in line is the second-greatest thing to do here. That’s not spin: because there seems to be no such animal as a casual Telluride-goer, nearly every attendee has a story to tell, a great movie to recommend, or a questionable opinion they feel very strongly about. 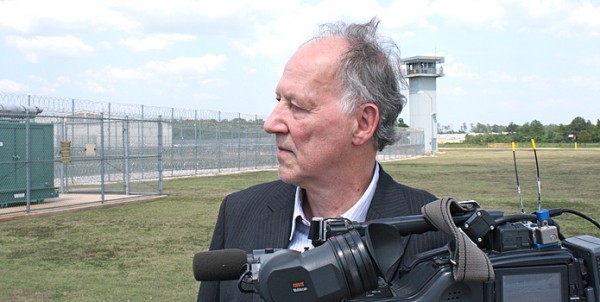 It must be said that Herzog is a personal hero of mine. Few collected cinematic ouevres resonate with me as deeply as his filmography (or at least the considerable fraction I’ve seen), and his badass-journeyman persona has been a source of near-constant entertainment for years. So from the moment I learned he’d be subjecting himself to a student Q&A, I searched myself for the perfect question. After watching his new documentary, Into the Abyss (reviewed below), I thought I’d come up with a humdinger: Herzog’s prolific nature and several-decades-long relevance has made him into a figure of almost universal reverence, but many of his films are full of men and women who struggle and fail to actualize themselves the way they’d imagined – this stretches from Stroszek and Cobra Verde all the way to Abyss. So, early in the Q&A, I asked: what does he consider to be his biggest or most important failure.

And the answer he provided, I must also say, was a little disheartening. His films, he explained, were like lost or damaged children – each special in their own way, each worthy of his affection. In essence, his response was that he did not fail – I’d have been just as happy to hear about a project that never even saw the light of day, but that never arose, either. (His last words of the talk involved a “guiding light” determining the course of his creative life, keeping him on the “correct” path.) Throughout the talk, Herzog stayed very much in the same mode he always is – forthcoming, yes, but ever-sly and always with a witticism at the ready. I had hoped to see another side of one of my favorite creative minds, and it became clear it just wasn’t on the agenda – and perhaps he had no other side to reveal at all.

With that said, this was still what turned out to be a nearly 90-minute session with one of the world’s greatest living filmmakers – Wenders became the first speaker in recent Teluride history not to turn up at the Symposium at all, and Herzog was more than happy to use up the extra time. Much of the discussion centered around his interview style in Abyss, which unearthed a delightful tidbit about his response to the e-mailed death threats he received from someone connected to an interview subject (“Fuck you!”). Other subjects briefly broached: films shot by sheep and cockroaches, the nature or holiness of the image, the importance of knowing “the heart of men,” the advantages of knowing how to steal a car and forge signatures, and police crime-scene footage as conceptual art. Oh, and one parting chestnut, taken completely out of context for maximum impact: “A yoga cass full of women is the ultimate abomination for me.” 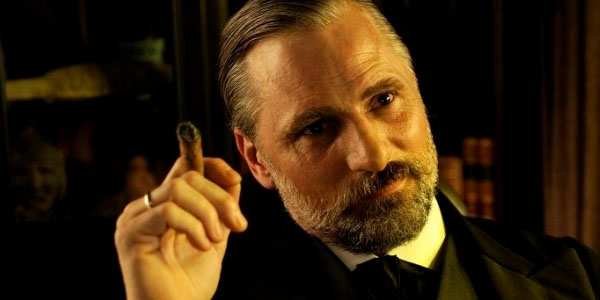 David Cronenberg’s first film since 2007’s uneven mob thriller Eastern Promises, A Dangerous Method seems destined to confound and divide nearly both seasoned fans and casual moviegoers. Considerably more austere and literary than any of his previous work, while retaining his intense interest in the human animal, Method is at once slyly subversive and carefully measured in its approach to both theme and historicity.

Method, which spans roughly a decade, opens in 1904 Vienna, where budding psychoanalyst Carl Jung (Michael Fassbender) has agreed to take on Sabina Spielrein (Keira Knightley) as a patient in order to test a psychoanalytic technique invented but apparently heretofore untried by Sigmund Freud (Viggo Mortensen). Spielrein suffers from intense panic attacks that cause her body and face to contort wildly, and render her speech nearly incomprehensible. By employing Freud’s methods, Jung is successful in getting Spielrein to discuss her intense but unconsummated sexual desire and her absusive relationship with her father, and subsequently she resumes studying medicine and eventually psychoanalysis itself. Over the next ten years, Jung and Freud meet and form a close personal and professional friendship, while Jung’s doctor-patient bond with Spielrein threatens to derail into other territory entirely – egged on by another of Jung’s patients, the deeply hedonistic Otto Gross (Vincent Cassel).

As a tale told and reinterpolated at least three times over – first in John Kerr’s 1993 book A Most Dangerous Method, then adapted for the stage as The Talking Cure by Christopher Hampton in 2002, and finally in Cronenberg’s film (also penned by Hampton) – Method, the film, wears its postmodern indicators proudly, and in the precise service of its themes: Jung’s dreams prophecizing the great European calamities to come; Freud and Spielrein’s frank discussions on Semitism and otherness; the repeated acknowledgements that Freud’s ideas will resonate for over a century; the too-prescient nods to the crumbling gender divide. Method is, at heart, about the struggle that faces humans once the basic work of self-knowledge is done – in particular, are base instincts to be embraced and given life, or discarded and repressed? That the question seems to have no satisfying response to the present day underlines Method‘s effectiveness in transcending musty costume-drama trappings.

Though Fassbender and Mortensen are critics’ darlings, it’s Knightley that’s a revelation here. Her progression from full-blown, debilitating psychosis to comparatively mild neurosis is utterly believable, and her intelligence and poise in her intellectual sparring matched with Jung and Freud are innervating to behold in this context. Working from Hampton’s intensely dialogue-driven screenplay, Cronenberg is able to hone in on the thematic heart of every sequence despite the lack of his usual grotesque visual aids. Despite the stark change of time and setting from the rest of his films, Method feels entirely of a piece with Cronenberg’s previous explorations of desire as a destructive, uncontainable force, only delivered in a much more strongly internalized fashion. Despite the near-total absence of violence, explicit sex, and outright grotesquerie, the terming of his work as “body horror” remains entirely appropriate.

[vsw id=”lblzHkoNn3Q” source=”youtube” width=”500″ height=”425″ autoplay=”no”]
–
The Forgiveness of Blood
–
Joshua Marston’s first feature, 2004’s Maria Full of Grace, still counts as one of that half of the decade’s most assured debuts, a nerve-rending tale of survival and perseverance that benefitted greatly from its startling lead performance from Catalina Sandina Moreno. After spending the intervening years directing for television (including episodes of Six Feet Under and In Treatment), Marston has returned with The Forgiveness of Blood, which shares with Grace the presence of an irresistable narrative hook: here, as with Grace‘s drug-mule process, it has a direct tie to the film’s setting.
–
For the second time in a row, LA native Marston has made a narrative feature set outside of his home country. Blood takes place in Albania, where family feuds are a way of life. (The conflicts here make the Ozark tensions of Winter’s Bone look like, well, Family Feud.) With just an askew look, old wounds can be opened anew and blood can be shed. At first, young Nik (Tristan Halilaj), has no reason to pay the traditions much mind, as he’s much more interested in a pretty girl he goes to school with. When his father and uncle are involved in a land dispute that turns deadly, however, Nik and his sister Rudina (Sindi Lacej) are suddenly beholden to age-old laws and restraints that transform their young lives.
–
Blood functions best not as a pulse-accelerating affair like Grace, but rather a complex and conflicted portrait of youth bristling against traditions of violence and conformity. Nik wants badly to participate in the rituals of teenhood, and romance, and enjoyment, but instead is forced to shoulder the burden of the older generations’ labyrinthine codes of honor, retribution and female repression. The pce is leisurely – sometimes too leisurely – but the last-ditch solution offered by Nik in the film’s final minutes is both heartbreaking and unmistakably correct.
–
[vsw id=”PdfCWDIS860″ source=”youtube” width=”500″ height=”425″ autoplay=”no”]
–
Into the Abyss
–

Werner Herzog does not direct films anymore. Well, not individual films. Even more than most other filmmakers, each new title Herzog produces constitues a new chapter in the Great Tale of Life as Herzog Tells It. It’s there in the aesthetics – the identical credit and strucuring style shared by his recent documentaries – but more importantly it’s in the ever-present sense that each and every one of Into the Abyss‘s hastily captured moments of grace, sadness and pain are informed by Herzog’s approach as both a documentarian and as a relater of human stories.

In this chapter of the Herzog tome, the estimable Austrian travels to Conroe, Texas, to speak with Michael Perry, a 28-year-old death row inmate due to be executed in only a few days’ time. Perry and co-defendant Jason Burkett (who received a life sentence) were convicted of murdering three people in an attempt to steal a car. Herzog (who is faintly visible in the reflection on the bulletproof glass in his scenes with Perry) also visit with the families of the murder victims, as well as a long-time death row guard who quit after a profound moment of revelation, and Burkett’s perpetually incarcerated father.

After a slightly whimsical prologue, in which Herzog probes a local chaplain over the significance of local squirrel habits, Abyss becomes one of Herzog’s bleakest films, fascinated as it is with the mechanics of grief, the unwitting performance-art quality of police crime-scene footage, and the patterns of waywardness in troubled families. Though there are moments of lightness – most of them provided by some of the more incidental interviews, and the figure of Melyssa Burnett, who can’t help but remind one of Sondra London from Errol Morris’s First Person.

Despite the not-at-all concealed nature of Herzog’s take on capital punishment, Abyss ultimately does not function primarily as an anti-capital punishment advocacy piece, but instead another one of Herzog’s elaborated portraits of life on the margins of existence – here presented both in the form of people with no time left and those whose loss makes their remaining time the heaviest of all possible burdens. Despite the occasional bouts of humor, absurdity, and charm, it’s a fittingly dark piece.

Tomorrow: “The Turin Horse,” “Le Havre,” talks from Hampton and Marston, and more.