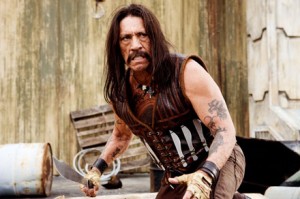 An article published today in the Austin American Statesman describes how Texas Governor Rick Perry signed into law a filmmaking incentives bill with Texas’ most prolific filmmaker at his side, Robert Rodriguez.

Now, a little more than a year and a half later, Texas has denied a grant for as much as $1.75 million to Rodriguez’ film Machete, filmed in Texas and released in September. This comes after Rodriguez had already praised the Texas incentives bill as crucial to being able to make films in Texas. “Thanks to the bill, I don’t have to go shoot out of the state,” he told the Associated Press before making Machete.

Why was the grant denied? The Texas Film Commission referred to a code that allowed denial, “because of inappropriate content or content that portrays Texas or Texans in a negative fashion.” So either Perry is playing “moral police” with a violent film, or the negative portrayal of a corrupt Texas immigration officer and an evil state senator hurt his big ol’ Texas feelings.

During a time when Austin’s film industry is growing, and with a state economy greatly in need of the cash flow and job-creation spurred by film projects, it seems risky to be snuffing out potential funding for filmmakers (this is not the first film that’s been denied funding through the incentives plan this year).

Ironically, state government played an important role in the production of bloody, violent The Texas 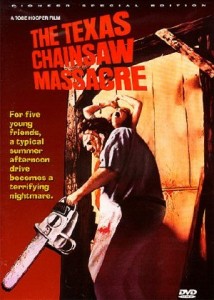 Chainsaw Massacre thirty years ago. “Chainsaw’s primary backer, was a former Texas legislator, and Warren Skaaren, the film’s producer’s representative, was the head of the Texas Film Commission,” says author Alison Macor, in her book Chainsaws, Slackers, and Spy Kids: Thirty Years of Filmmaking in Austin, Texas. I don’t know about you, but that film wouldn’t make me want to take a trip to Texas.

Austin has certainly gained recognition in the film world for its festival scene, which includes South by Southwest, Fantastic Fest, Austin Film Festival, Austin City Limits and others. But there’s a palpable sense in the town that it would like, more than anything, to be taken seriously for its production, and even post-production industry.

Austin has the advantage of The Austin Film Society and their own Austin Studios, located in vacant hangars where Austin’s airport used to be. The city leases the property to the Austin Film Society (AFS) for $100 per year and in exchange,  AFS promotes filmmaking in Austin. With a deal like that, struck over 10 years ago, how could the industry not flourish?

The truth is, it has. Production companies large and small keep popping up, T.V. and film directors have taken notice and the Texas Film Hall of Fame is no longer a joke. Recently, there’s been an effort not just to promote the making of films in Austin, but to also seize the city’s battle cry of “Keep Austin Weird” basically by keeping it local. People in the industry like Allison Turrell, from post-production company Stuck On On would like to see all the production work that happens in Austin, turn into post-production work  for Austin companies. “A lot of production happens in Austin,” she says, “but then most films go to LA to finish. We’re trying to change that equation,”

And they are, little by little. Take Shelter, a film by Austin director Jeff Nichols, was sent to Stuck On On for post-production, and was just named most-anticipated film for 2011 Sundance by Vanity Fair. Another big addition to Austin’s post-production industry is the Alamo Draft House’s new distribution company, Drafthouse Films. 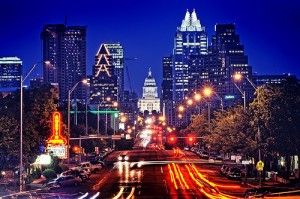 But living in the “liberal oasis” of this Central Texas city, will always present a schizophrenic way of life. Here, in both the State Capital and the self-proclaimed “Live Music Capital of the World,” conservative state senators eat at the same cafes as liberal activists, newly-arrived  hipsters from Portland ride their bikes through the historically poor but recently gentrified Eastside, and starving artists bump elbows with  executives from Dell while shopping on hip South Congress. A recipe for hot debates over what  role the arts should play in this town.

Just this summer, proposals for erecting a bronze statue of Gandhi in an Austin park, a symbol of community service and peace, resulted in a loud chorus of opposition from people who object to statues of foreigners in public spaces. It’s these sentiments that make a person fearful for the future of arts in Texas. And my guess is that Robert Rodriguez will think twice before filming in Texas again. If both Louisiana and Texas are courting him with an incentives package on a future project, he might not be so kind to his home state.

But there may not even be an incentives plan for filmmakers worth bragging about come January. Budget cuts to the filmmakers’ incentives bill are already on the agenda for the Texas legislation. The struggle to support the arts not only by liking them, but by actually get funding behind them is one that will always exist for Austin. Maybe it’s what  keeps us weird. Maybe all the artists and liberals who live here are just masochists at heart.