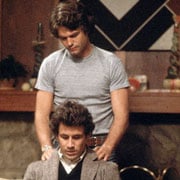 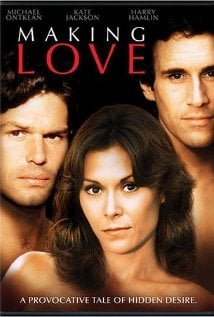 Making Love is often cited as the first mainstream American movie to deal realistically with gay characters and themes. Because it was both unprofitable and unloved by critics, it would be a full decade before Hollywood tried again, with Philadelphia, to convince straight filmgoers to see a gay movie. Since Making Love came out in 1982, right as the AIDS crisis was starting to hit, it became a relic almost instantly. As men began dying in San Francisco and New York, this low-stakes domestic drama must have seemed pointless if not absurd.

Its story is simple. The seemingly happy marriage between Zack, a young doctor (Michael Ontkean), and Claire, a TV executive (Kate Jackson), disintegrates when Zack figures out he’s actually attracted to men. He starts an affair with Bart, a gay writer played by Harry Hamlin, who is not interested in monogamous relationships and who breaks his heart. Miraculously, all three characters end up in a happy place, which might have been one reason Making Love was critically pilloried as being unrealistic when it came out.

The plot is simplistic, the characters thin, and the performances merely adequate – sincere in the “very special episode” vein. But the screenplay by Barry Sandler is remarkably progressive for its time. Making Love assumes its audience knows that sexuality is not a choice, and it doesn’t even condemn Bart for continuing to sleep around rather than settle down. The choice that is presented in the film for its gay characters is one between monogamy and promiscuity, column A or column B.  Of course, one cannot expect a mainstream movie from 1982 to explore the intricacies of open relationships, but the idea that some gay men prefer being monogamous must have been surprising for a major sector of its audience.

20th Century Fox and director Arthur Hiller needed to sell Making Love to straight, mainstream America. But the movie is just too tidy and politically correct, claiming that life turns out perfectly if everybody is just honest with each other. Gay audiences didn’t buy it, because they were living through something far more complicated than the movie was willing to explore. And the liberal straight audiences that would go see a movie with gay characters were sophisticated filmgoers just coming out of a decade of Coppola, Altman, and Scorsese. 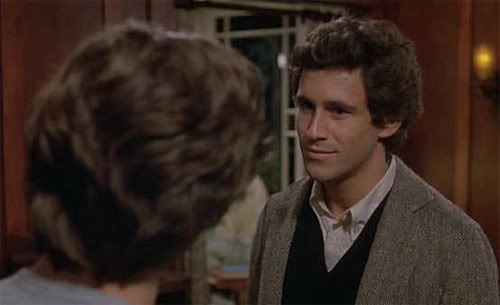 The movie is so careful not to offend that its scenes in a gay bar look more like they were shot on the set of Cheers than Cruising. And there are absolutely no screaming queens, a la The Boys in the Band. In fact, everybody is overtly masculine, as if having a feminine gay man in the film would be offensive in and of itself. But of course, the mustachioed, flannel, Brawny-man version of gay life is its own stereotype, and 30 years after Making Love, Hollywood still rarely shows gay characters with any sort of diversity.

Arthur Hiller was a respectable, stylistically conservative filmmaker whom Fox trusted with such a controversial subject. One of his previous movies, 1970’s Love Story, was a huge hit among audiences alienated from the darkness and innovation of much of contemporary cinema. By 1982, his work was totally anachronistic, with its cautious cinematography by David M. Walsh and tinkling piano score by Leonard Rosenman. The film is self-consciously tasteful, with no nudity or explicit sex. In fact, if this was someone’s introduction to gay life, he or she would assume the only thing gay men did in bed together was roll around and kiss. Even the title, Making Love, is the ultimate sexual euphemism, a phrase no one but the oldest or most conservative among us would ever utter seriously.

Its influences are not other contemporary films but the melodramas of previous generations, by directors like Douglas Sirk and George Cukor. These were labeled “women’s pictures” or “weepies,” where a female protagonist has to make a great sacrifice to gain fulfillment. And though Making Love is ostensibly the story of Zack and Bart’s burgeoning love, its real protagonist is Claire, a woman whose marriage is falling apart. Divorce was at an all-time high, and Baby Boomer women were being asked to choose between a family and a career, something their mothers were not allowed to pursue. So Claire’s arc, as much about her own happiness as her husband’s, should have connected with a wider audience.

Unfortunately, Hiller has neither the visual style of Sirk or the gift of getting great performances out of actors like Cukor, so Making Love sometimes feels like an earnest TV movie, a whitewashing of the messiness that would truly happen if this scenario played out in real life. Claire forgives Zack awfully quickly, and Zack adjusts to out gay life, barely missing a beat. This must have been the fantasy of some early-80s liberals, the steady march towards progress – where women can have a career and a husband, and gay men can decide whether to settle down with one guy or cruise clubs every night, where everyone can live the way he or she wants to.

As we all know, AIDS threw a wrench in that fantasy almost right as Making Love was still screening in theaters. The fear that America had started to shed for gay people during the 1970s came back full force, this time accompanied by a very real threat of sickness and death. The scene where Bart and Kevin first meet, a doctor’s appointment that Bart arranges because he thinks an ingrown hair is a tumor, is played for laughs. It would be a long time before the scene of a gay man in a doctor’s office could again be written as comedy.

On its own terms, Making Love is a pleasant, occasionally touching film. Maybe because of its reputation as a huge bomb, it’s easy to expect something cringe-worthy, but it’s very watchable. Despite its flaws, some caused by the reflexive cautiousness of the film industry and some just an accident of timing, it’s worth a look. If nothing else, it’s a time capsule of an optimistic moment in the gay rights movement, made poignant by the destruction that lay ahead.