Home
Entertainment
‘The Adventures of Tin-Tin: The Secret of the Unicorn’ is visually stunning and action-packed
Prev Article Next Article 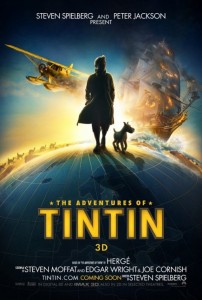 The Adventures of Tin-Tin – The Secret of the Unicorn

For the past few years, Steven Spielberg has been on something of a sabbatical to focus on his work as a producer. Any director worth his money would welcome the influence of one of the greatest directors of the past 30 years, but unfortunately the films he has been involved with are of massively variable quality; for every Super 8 there is a Cowboys & Aliens. In his first film since the terrible 4th Indiana Jones outing, Spielberg returns with a film he has been planning to make since the 1980s but has only to manage to make it in now thanks to the technology existing for his vision to be possible.

Spielberg’s return has a creative staff to awe, with Peter Jackson as executive producer and a writing staff made up of Doctor Who Head-Writer Stephen Moffat, Attack the block writer/director Joe

Cornish and Shaun of the dead writer/director Edgar Wright. They have collected together the Crab with the Golden Claws, The Secret of the Unicorn, and Red Rackham’s Treasure books into one story that makes up Spielberg’s series opener. Being a mystery film, it’s important not to reveal too many details about the story. The basic set up sees TinTin (Jamie Bell) visit a flea market where he buys a model ship on the spot, he is soon approached by two people, the first is an American police officer and the second is Ivanovich Sakharine (Daniel Craig). Taking the model home, TinTin is soon embroiled in a mystery surrounding the models of “the unicorn.” Being of an inquisitive spirit, TinTin follows the mystery across the globe meeting Captain Haddock (Andy Serkis) in the process.

Those who grew up with TinTin have called shenanigans on the way the plot unfolds in a way that has more in common with the traditional Hollywood action fare than anything the original stories encapsulated. It is true; Secret of the Unicorn is more mainstream than that which the avid TinTin might be used to but this is Steven Spielberg, nobody does the boy’s own adventure better than him.

The general sense of adventures sets the film up with an atmosphere and execution of something approaching Indiana Jones, with all the mind blowing action set pieces you might expect, the

centrepiece of which is a scene which starts off as a motorbike chasing a car and evolves into a police story style chase down the side of hill destroying everything in sight. Its magnificence is magnified further because it is all in one shot – no cuts, nothing. Snowy also gets a decent set piece or two. Not all these set pieces are of a consistently high watermark; the final showdown goes too far and the climactic face-off suffers because of it.

Alongside the adventuring is a fantastic sense of humour. Writers Moffat, Wright & Cornish have developed one of those very rare occurrences, a film that is funny for children and adult alike. This isn’t in any way a condescending comment either, as the jokes aren’t clearly defined, with adult’s jokes in one box and kids’ in the other. The Adventures of TinTin is one of those even rarer occasions where the jokes are funny regardless of age; however there is one risqué inclusion on bestiality. That line is included in a scene with a seemingly endless succession of jokes which hit right on the money, whether they are one-liners about certain sleeping characters’ personality traits or floppy-limbed physical comedy. 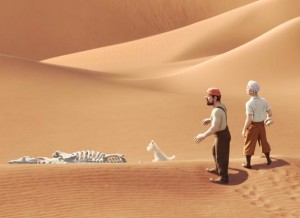 All this is shot using the motion caption technology which Andy Serkis champions so strongly with his Imaginarium studio. On the one hand, the technology along makes for some gorgeous visuals, yet the character motion and design is caught somewhere between fantasy and reality. There are certain occasions where it would be all too easy to forget you are watching an animated film, and then on other occasions it looks all too cartoonish, with the oft-criticized dead facial motions that punctuate the form. On the positive side, it’s not as bad as other films that strive for reality, at least in TinTin, the character design illustrates and acknowledges the icons roots as an animated character.

All of this would be irrelevant if it didn’t have the acting talent to carry the film and given that it’s a mo-cap film and stars Andy Serkis, very little else needs to be said. The man has a reputation for stealing the limelight from larger profile actors with his physical roles, such as Cesar in Rise of the Planet of the Apes. As Captain Haddock, he once again steals the show with an energetic psychical performance and backed up by his own inimitable delivery. Other stand outs include Daniel Craig who has the time of his life in a break from the more intense role he is known for. Jamie Bell might inhabit a bland role, one supplemented by his brilliant dog, Snowy, but he always captures the adventurous spirit of the young investigator.

TinTin enthusiasts might hate this film, for everybody else it serves as a reminder as to why Steven Spielberg is held in such high esteem. The set up 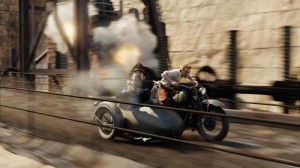 for a sequel might be lazy, but generally, this is a massive return to form for Spielberg and a film which kid and parent can spend a few hours together and come out with equally big smiles on their faces.