Leos Carax followed his short film Strangulation Blues (1980) with the tragic Boy Meets Girl in 1984. Starring Denis Lavant and Mireille Perrier, Carax’s first feature announced a new and exciting presence in both French and World cinema. Boy Meets Girl premiered in May 1984 at the Cannes Film Festival in the Independent Critics Week section, certainly a great venue to premiere a film and quite an impressive place to show a first feature as well. This film introduced many of the themes and cinematic problems that Carax would continually return to in his later films, such as a chance encounter between two people, failed romance, meditation on silent and contemporary cinema, and poetic treatments of Carax’s own biography.

Boy Meets Girl is an intense depiction of a social outsider and the way this outsider relates to the world around him. Alex (Lavant) is a tiny and timid Parisian. His screen presence recalls Charlie Chaplin’s infamous Tramp persona while being significantly modified for a modern Paris in a post-New Wave cinema. Lavant is not a typical leading performer, and not one we would see in mainstream French or North American cinema. He is small, frail, and has distinct homely  features (his eyes are abnormally far apart, his face is full of pock marks, and he has a mousy look). Alex is a stand-in, or rather an analogue for Carax (Lavant reprises this figure in Carax’s Holy Motors [2012] as well). The other lead of the film – Perrier – was romantically involved with Carax at the time of this film’s production and is Alex’s love interest. Romantic love is central to a large portion of Carax’s cinema and the peculiarly tragic way he depicts love begins with this film.

Carax’s public persona and his artistic preoccupations are incessantly aggressive. His desire to make films has as much to do with a particular obsession in his personal life as it has to do with a disgust with contemporary cinema. Boy Meets Girl is an assault to the mainstream cinema of the Eighties in France and North America. A decade that has no shortage of great films, the Eighties is typically understood as a low point in cinema (Steven Soderbergh said as much in a recent interview). Fortunately, for cinephiles who are not lazy or do not have their head in the sand, the Eighties has an enormous amount of great films and should not be considered a low-point by any stretch of the imagination. However, for Carax, there were many things to react against and this film appears to attack two problems at once and offering a strange solution: the first being a lofty, auteurist (and somewhat egocentric) stylized cinema with no connection to realist narratives and the second being a naive and pronounced naturalism. In initially watching Boy Meets Girl, you may be struck by how effortlessly Carax can move between down-to-earth naturalism and switch to non-realist/stylized moments which created an extremely abrasive and unique mise-en-scene. It is this strange balance between naturalism and stylistic invention that characterizes Carax’s cinema.

A few examples might be helpful here to get the point across. In the first act, Alex walks by Mireille speaking to her boyfriend through the apartment intercom. Very close, he stands behind the boyfriend, listening to their conversation. Carax disconnects the boyfriend’s voice from his body: the lips and words spoken do not match up. Emphasizing the discontinuity between sound and image is a fundamental interest of Godard’s cinema and it is something that Carax has inherited while combining it with a higher degree of naturalism than Godard was ever interested in producing. On first watch, one might think we are hearing a voice-over instead of the boyfriend’s dialogue (making his dialogue a voice-off), because the performances do not draw attention to this stylistic flourish but remain in the naturalist register. To disrupt the scene further, the voice-over also sounds like a man whispering into the microphone (reminiscent of Godard’s whispering narrator in 2 ou 3 choses que je sais d’elle {1967]), which further separates the sound from the image because what we see is a man speaking into an intercom outside. Finally, the loud music blaring from inside the apartment is not heard on the other side of the intercom while her boyfriend speaks through it. Carax cuts to the apartment, music blaring as it was before, and then cuts back to the boyfriend and the eavesdropping Alex outside. The music is now audible. Alex and Mireille are within the same sound space, while her boyfriend continues to tell her about his feelings. “As I watch you, the tune goes…I don’t want this girl anymore. I don’t want anyone to have you…yet I don’t want to be loved,” the boyfriend tells Mireille. Alex lingers by the intercom until Mireille hangs up and then follows the boyfriend to a cafe full of pinball machines. This stylistic, self-conscious digression disrupts the flow of this already aimless plot and foregrounds image and sound as disconnected parts that are made into a unity by the auteur.

Other self-conscious intrusions to the narrative occur and repeat throughout the film. Carax repeatedly cuts to black during conversations and action scenes. The cut to black creates a stilted effect to the decoupage and the flow of the scene, but it also self-consciously taps into the materiality of the image itself, what Adrian Martin has called the unconscious of the film, by calling attention to the flicker of light caused by projection and the physical apparatus of cinema. It is also a subtle reference to silent cinema, and much like Carax’s contemporary Philippe Garrel, there are many references to silent cinema in this film as in Garrel’s films. Superimposition of two images abound in this film and the use appears to be somewhat arbitrary. For example, during the dance sequence, Mireille tap-dances in her apartment, which Carax inter-cuts with Alex walking along one of the bridges that cross the Seine. Carax superimposes images of her performance while Alex walks along the Seine seeing lovers kissing, which references the common usage of superimposition from silent films. In this sequence, Carax cuts to a shot from behind Alex and follows the actor, who appears to float above the ground with his hands stretched out before him, touching air, which is superimposed with quick shots of Mireille’s tap-dancing feet. Furthermore, the inclusion of a tap-dance sequence is a reference to Chaplin’s films and other silent cinema (it also brings to mind the impromptu dance sequence in Bande a part [1964]). It is somewhat strange and ironic that Carax looks to silent cinema’s icons, like Chaplin and Buster Keaton, for inspiration; and yet his films feel so contemporary (and too obsessively personal to become mainstream as well, which might explain why they have not been Harvey Weinsteined for North American audiences). 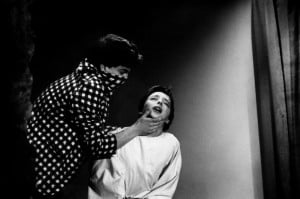 Boy Meets Girl is a complex film in terms of its visual style, editing, and decoupage, while the narrative is deceptively simple. Nearly an hour goes by until the boy meets the girl. Alex and Mireille meet at a party that is somewhat similar to the party scene in Pierrot le fou (1965) without the changes in color, and he professes his love for her. Alex’s instant romance is tinged with desperation and sincerity; however, their romance ultimately ends in tragedy. It is both comic and sad how Carax framed the final scene, which juxtaposes the failed romance between Alex and Mireille with two loves staring at the stars together in the next apartment, seen through Mireille’s window. Carax’s camera glides over Alex and Mireille and focuses on the lovers together in the other apartment and then glides up to the night sky, showing us the stars.

Carax’s first feature is an incredibly bold work that ranks among one of the best films of the Eighties. Boy Meets Girls introduces many of the themes and stylistic experimentation Carax would continue to obsess over in his next three feature films. 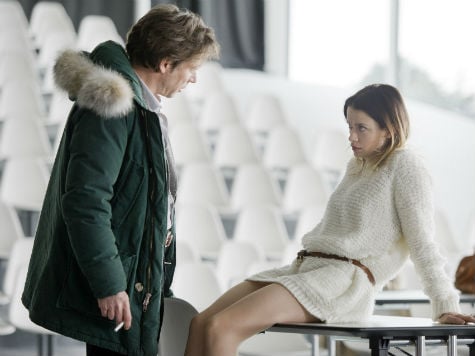 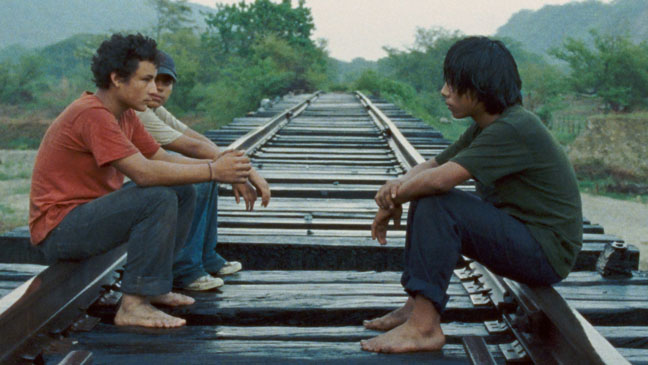