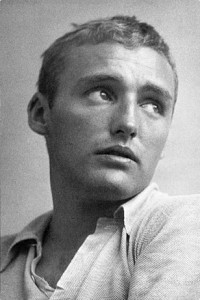 He He was a cowboy, an outlaw biker, a drug fiend, a madman, a criminal, a gun nut, a hippie, a Republican, and an Obama supporter. Hopper was also a prolific photographer, painter, and sculptor. His painting style ranged from abstract impressionism to photorealism and often included references to his cinematic work and to other artists. He’s created the cover art for the Ike & Tina Turner single “River Deep – Mountain High” and was noted in “Better Homes and Gardens” magazine as an up and coming photographer “to watch” in the mid 1960s. He was always mixed in with the art world as a poet and as a collector of art (particularly Pop Art). One of the first art works Hopper owned was an early print of Andy Warhol’s “Campbell’s Soup Cans” bought for $75. He’s been reported to have an uncredited role in Johnny Guitar and he directed the critically acclaimed Colors. He was nominated for an Emmy Award for the 1991 HBO films Paris Trout and Doublecrossed (in which he played real life drug smuggler and DEA informant Barry Seal) and in the very same year he starred as King Koopa in Super Mario Bros., a 1993 critical and commercial failure loosely based on the video game of the same name. 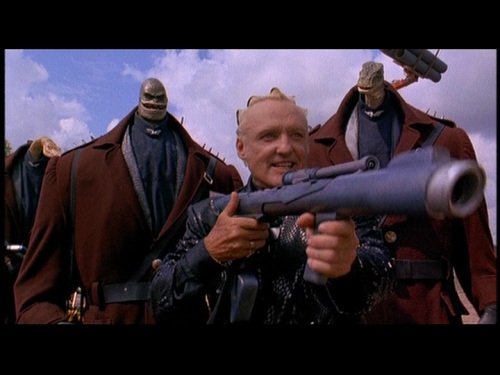 He subsequently appeared in over 140 episodes of television shows such as Gunsmoke, Bonanza, Petticoat Junction, The Twilight Zone, The Barbara Stanwyck Show, The Defenders, The Investigators, The Legend of Jesse James, The Big Valley, The Time Tunnel, The Rifleman and Combat!. 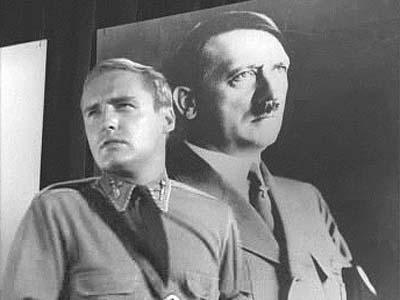 Dennis Hopper in The Twilight Zone

Hopper even teamed with Nike in the early 1990s to make a series of television commercials where he appeared as a “crazed referee”. Later he played villain Victor Drazen in the first season of the popular drama 24 and also appeared on Gorillaz’ 2005 “Demon Days” album, narrating “Fire Coming Out Of The Monkey’s Head.”

The story goes that after a legendary battle of wills with director Henry Hathaway on the set of the 1958 film From Hell to Texas, Hopper earned a well-deserved reputation as “Dennis the Menace.” He was unofficially consigned to the Hollywood sidelines, and although Hopper appeared opposite screen royalty (James Dean, Marlon Brando, Elizabeth Taylor) he never quite attained that status himself. His work often took a back seat to his drug use and turbulent personal life. Still, over the course of a career spanning six decades, this man has delivered some breathtaking performances. 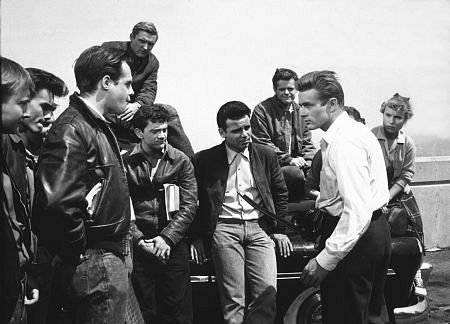 At age 18, a very young and very blond haired Dennis Hopper signed with Warner Bros. for $200 per week and was cast as gang member Goon in director Nicholas Ray’s Rebel Without a Cause. The small role didn’t give Hopper many lines but the famous knife fight scene at Griffith Park Observatory is still one of his most memorable scenes.

“I thought I was the best young actor in the world,” Hopper once said. “Then I met James Dean. I’d never seen acting like that before. He was way over my head.” 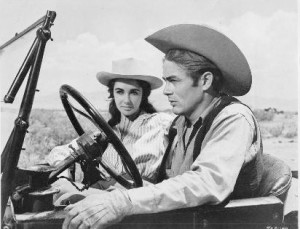 Hopper appeared with James Dean again the following year in Giant, playing Bick Benedict, the grown-up son of Rock Hudson’s imperious cattle rancher. Giant marked only the fifth big screen appearance of Hopper up to that time, but one standout scene comes when he squares off with Jett Rink, played by James Dean in his final film.–

Another in a string of nearly forgotten roles, Hopper plays the bet-taker Babalugats in the epic Paul Newman prison drama. Just before Newman has to make good on his bet to eat 50 eggs, Hopper trails along behind Newman and George Kennedy clutching the cash.

Hopper makes a small appearance as Max in this famous attempt to put the full LSD experience onto film. Written by Jack Nicholson and directed by Roger Corman, who were trying to cash in on the growing counterculture of the sixties.

Before he hopped on a hog with Peter Fonda and Jack Nicholson in Easy Rider, Dennis Hopper appeared in this biker opus as the deranged leader “Chino” of a Harley gang (The Black Souls) who have a run-in with the Glory Stompers. The highlight of this film however is definitely another over-the-top and entertaining performance from Dennis Hopper. His character inconsistencies go beyond being merely bipolar. He does what Hopper does best, playing an absolutely insane character with style. The film also features a soundtrack from Davie Allan & the Arrows.

Dennis Hopper’s movie breakthrough didn’t arrive until 1969, when he co-wrote, directed and acted in Easy Rider. Dennis Hopper plays Billy to Peter Fonda’s Wyatt a.k.a. Captain America in this psychedelic road trip classic from the Woodstock era. For a dramatized snapshot of the hippies

of the late ’60s, look no further. It’s a tale of two bikers who deal drugs and hit the road in a quest for freedom. The duo climb on board their motorcycles and head down to New Orleans for Mardi Gras. Along the way they encounter the alcoholic lawyer George Hanson (Jack Nicholson), a hippie commune, violent rednecks and many other interesting characters. The film was immensely profitable, highly influential, a paean to the ’60s counterculture and a fascinating portrait of America at the end of a unsettling decade and a touchstone for an entire generation.

“No, man, like hey, man. Wow. I was watching this object, man, like the satellite that we saw the other night, right? And, like, it was going right across the sky, man, and then… I mean it just suddenly, uh, it just changed direction and went whizzin’ right off, man. It flashed…” 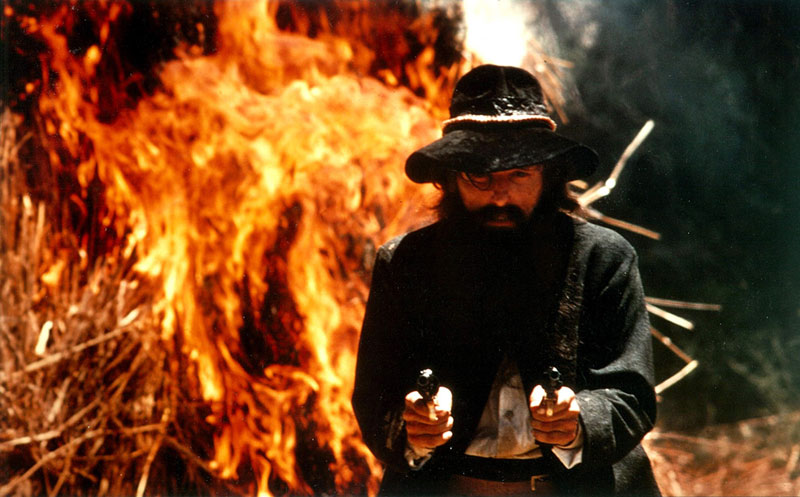 Philippe Mora’s Mad Dog Morgan, is a violent true story and a 70’s classic that forever changed the way international audiences saw Australian cinema. Dennis Hopper plays Mad Dog Morgan, Australia’s most notorious criminal, with all the bravado that turned him into the decade’s most radical screen icon. Critics at the Cannes Film Festival praised Mad Dog Morgan and awarded it the John Ford Memorial Award for Best Western before it became a worldwide hit.

One of the inaugural films of the Australian New Wave, Mad Dog Morgan set a new standard for artistry in genre filmmaking. It was produced when increased government funding launched a bonanza of cutting edge genre films like Mad Max and Long Weekend. 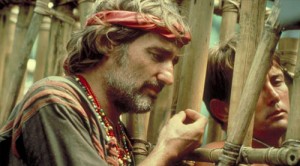 Here is another case of Hopper finding a way to attach himself to, and distinguish himself in, some of the era’s most important films. In Apocalypse Now Dennis Hopper plays a wild hippie and nameless photojournalist in director Francis Ford Coppola’s classic ode to the Vietnam War.

“Sometimes, he was just so wired and so out there that his mind couldn’t track what few little tasks we were asking him [to do],” Coppola once said. “And when he drank and did all these things, it was just a non-stop manic monologue all the time.”

Quoting a line from T.S. Eliot’s ‘The Love Song of J Alfred Prufrock.’ in his altered state of mind, Hopper not only delivered an indelible performance but in a movie full of completely mad performances, Dennis Hopper manages to still stand out as one of the craziest.

In 1986 two notoriously known crazies came together to create one of the most memorable movie villains of all time. In David Lynch’s Blue Velvet, Hopper plays one of the most horrific characters in 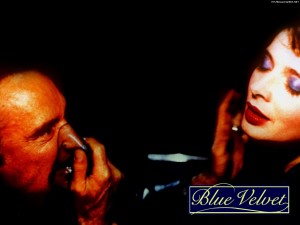 film history – the sociopath gangster Frank Booth who runs the underworld in the sleepy little town of Lumberton. Hopper’s portrayal of Booth singlehandedly lifts him into an entirely different level of acting and instantly reinvigorated his career. An indelibly disturbing character, Booth drops F-bombs with nearly every sentence, and serves as an example of the potential depths of man’s depravity.

“I shoot when I see the whites of the eyes,” Hopper announces in one of his more lucid, profanity-free moments.

Hopper followed Blue Velvet with Hoosiers, a film that presented a more positive depiction of small-town life. Dennis Hopper plays Wilbur “Shooter” Flatch, the alcoholic father whom Norman Dale (Gene Hackman) takes on as his assistant basketball coach at small-town Hickory High School in Indiana. It’s a heart-breaking performance of uncanny subtlety, that came shortly after Hopper became clean and sober himself. The unforgettable portrait of a man crawling back from the edge earned Hopper his sole Oscar nomination in an acting category.

“Alright, boys, this is the last shot we got! We’re gonna run the picket fence at ‘em! Jimmy, you’re solo right! Everett, Merle should be open on the other side of that fence! Now, boys, don’t get caught watchin’ the paint dry!” Hopper tells his charges in one memorable scene.

In the blockbuster Speed, he played Howard Payne, a disgruntled ex-cop and former bomb squad tech who rigs a Los Angeles city bus with explosives. Although Payne wasn’t half as dark or 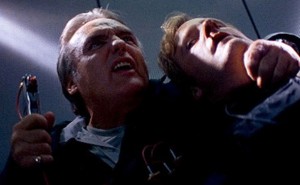 unsettling as Frank Booth, the gig gave Hopper one of his best-known bits of dialogue: “Pop quiz, hotshot: There’s a bomb on a bus. Once the bus goes 50 miles an hour, the bomb is armed. If it drops below 50, it blows up. What do you do? What do you do?”

Hopper is so all over the top in this role that he loses his head… literally.

Dennis Hopper has made over 100 movies during his career and has been widely praised for his betrayal of some quirky characters. He has received two academy award nominations and has been recognized by many groups for his great work both in front of and behind the camera. But within that impressive resume there is bound to be some less-than-stellar entries. His highest-profile bomb was the post-apocalyptic Kevin Costner film Waterworld, in which he played “The Deacon,” the environmentally unfriendly captain of a tanker called the Exxon Valdez. Enough said.

True Romance (1993)
Without a doubt my favorite performance from Dennis Hopper comes from True Romance. Dennis Hopper nailed a supporting role as Clifford, an ex-cop and father enlisted to help his son’s cause. He gets in over his head and it results in an epic face off between Hopper and Christopher Walken. Of course I am speaking of the famous “eggplant scene,” where Christopher Walken tortures Hopper for information on Patricia Arquette and Christian Slater’s whereabouts, only to have Hopper turn the tables around and deliver one of the greatest monologues of all time. The drug-and-mobster tale written by Quentin Tarantino is directed by Tony Scott and features six minutes of Hopper’s finest work. A brilliant moment, an epic performance from Hopper, and the defining scene of True Romance. 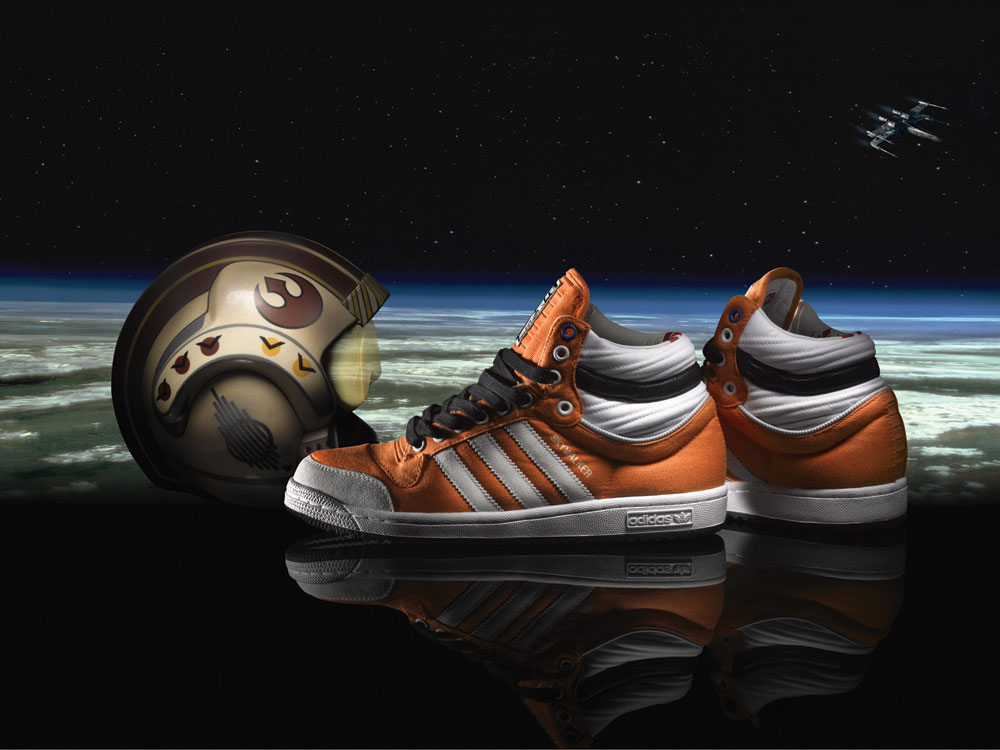