The Best of the Obsessed

Sandra Bullock’s new film All About Steve is hitting theaters today. In the film, Bullock plays Mary Horowitz, a woman who is set up on a blind date with Steve (Bradley Cooper) and instantly believes that they are soul mates. Obsessively, Mary decides to follow Steve anywhere he goes and will stop at nothing to be with him.

This got me thinking about how Hollywood often produces movies centering the domineering, aggressive and downright crazy, on-the-edge female character. Today, the majority of them are stereotypes, cliched personas of other characters (such as Bullock’s Mary in Steve) and are, honestly, annoying. Here are what I believe to be some of the best of the obsessed female characters to grace the silver screen. 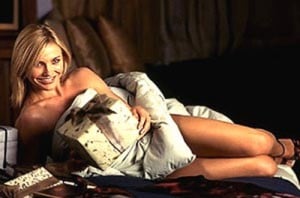 I remember seeing this film in theaters and saying to myself “Cameron Diaz better be nominated for an Oscar.” Disappointingly, she wasn’t, but I have to say that this is possibly Cameron Diaz’ finest performance. She hit all the ‘crazy’ notes perfectly in this film, playing Julie Gianni obsessed with Tom Cruise’s David Aames. It’s a shame she was only in the film for about 15 minutes. I remember seeing Alicia Silverstone for the first time in Aerosmith’s “Cryin’” music video and thought “wow, this girl is nuts.” Then I saw The Crush… and it was confirmed. Alicia plays Adrienne Forrester, a young Lolita-esque teeny-bopper who develops a crush on Nick Eliot (Cary Elwes) a newspaper reporter staying in her family’s guest house. When Nick begins to ignore her and date someone his own age, Adrienne decides that if she can’t have him, nobody should. It was ‘crazy’ from the moment you got your first glimpse of her. Sitting in her oversized chair, dressed in black lace, sunglasses and long flowing robes. “You’re Norma Desmond, you used to be big” says Joe Gillis (William Holden). “I am big…it’s the pictures that got small” proclaims Norma (Gloria Swanson). From then on, it’s all downhill for Norma. Obsessed with the idea that she will return to feature films, Norma believes that her life is, in fact, a movie and that everyone “watching her in the dark” will soon experience the best of her. Suicide attempts, a dead stuffed monkey pet and her constant outbursts show how big Norma Desmond really is big…big on crazy, that is. After a failed relationship, Allie Jones (Bridget Fonda) puts an add in the paper for a new roommate. The result, Hedy Carlson (Jennifer Jason Leigh). The two become great friends and Allie begins to feel like a teenager again. But Hedy becomes a little obsessed with Allie’s life and soon begins to mimic her clothes, appearance, and tries to steal Allie’s boyfriend. We’ve all had, or known someone who has had terrible roommate experiences. But this one takes the cake. I mean, when your roommate starts to look like you, you’ve got a problem. “Do you think the dead come back and watch the living?” Why would this be one of the first things you say to your employers new wife? When you live in a mansion haunted by the ghost of your employer’s dead wife, what else is there to say? Judith Anderson’s portrayal of Mrs. Danvers in Hitchcock’s Rebecca is a sight to behold. Her long, bird-like neck and large, hypnotic eyes would creep any viewer out. But when you are obsessed with keeping your dead employer’s memory alive, you’re not really fulfilling your essential job functions as a governess. The scene where she tries to get Joan Fontaine to jump out the window is classic. You would think your daughter getting her period for the first time should be a triumphant day, with sun shining, birds singing, etc. After all, your daughter has just become a woman, it’s part of growing up, it’s part of life. But for Margaret White (Piper Laurie) it was the worst thing in the entire world. Piper’s performance earned her an Oscar nod, but many bashed the film for her harsh performance as the holy-rolling-mother-or-a-telekinetic-teen. I guess religion and mental/super powers  should not mix. Because in her opinion, there is no higher power than God. Watch out Margaret White, your daughter is pretty wicked! It is kind of odd placing Faye Dunaway in this category, when the real culprit is Joan Crawford. A true to life psycho, Crawford was a physically, emotionally and verbally abusive mother. She would often put her children down when not meeting standards, sitting pretty or muttering “yes Mommie Dearest” to agree with her crazy attitude. But taking those skeletons from the closet, Dunaway portrays Crawford effortlessly, in addition to looking exactly like her in the film. And who would ever look at a wire hanger the same way again. “NO…WIRE….HANGERS…EVER!!” Kathy Bates as Annie Wilkes plays out to be your average nut-bar obsessed fan. She didn’t really do anything wrong. I mean she saved Paul Sheldon’s (James Caan) life and nursed him back to health. All she wanted was another Misery book, one of her favorite book series of all time. From the moment Annie says “I’m your number one fan,” you almost feel for her. I mean, how often is it that you can save the life of your favorite celebrity? It never happens. And using words like “Cock-a-doodie” and listening to Liberace records, this woman is clearly lonely and wants someone … to … oh … wait, what is she doing with that hammer? Oh God, Annie, no, please don’t …. and she did! Now that, my friends, is nuts. She boils a little girl’s bunny rabbit and sits in the dark turning on and off the lights for crying out loud!. It’s a lesson learned; don’t have affairs. First off it’s a dick-move, and second, things like this can happen. Now for the truly obsessed. I remember watching this movie late one night on TV, and it creeped me out. I love Clint Eastwood. He’s a bad ass. And the older he gets, the better her gets. I was a huge fan of Dirty Harry and The Man With No Name series. He is, in my opinion, one of the coolest action heroes (if you consider him to be one) of all time. Now enter Jessica Walter as Evelyn, the obsessed fan of Dave’s (Eastwood) late night radio show. She seems innocent enough. And then she starts getting angry…and ridiculously clingy. Then starts to threaten Dave, shred his clothes and attempt to kill Dave’s maid. In the end, he ends up torturing Dave’s girlfriend. I mean, yes, Eastwood made a BIG mistake in cheating on his girlfriend, pushing Evelyn over the edge (come on guys…just don’t do it) but who in their right mind wants to mess with Clint Eastwood? What is scary about this film… Eastwood almost gets his ass kicked. It’s unheard of.

To be honest, this is one of the toughest top 10’s that I had to write. There are so many best of the obsessed movies out there that it was so hard to choose. If anyone wants to add some, be my guest.