Home
Entertainment
Without Theatres: ‘The Chronicle of Anna Magdalena Bach’ may be critical to the ‘slow cinema’ debate
Prev Article Next Article 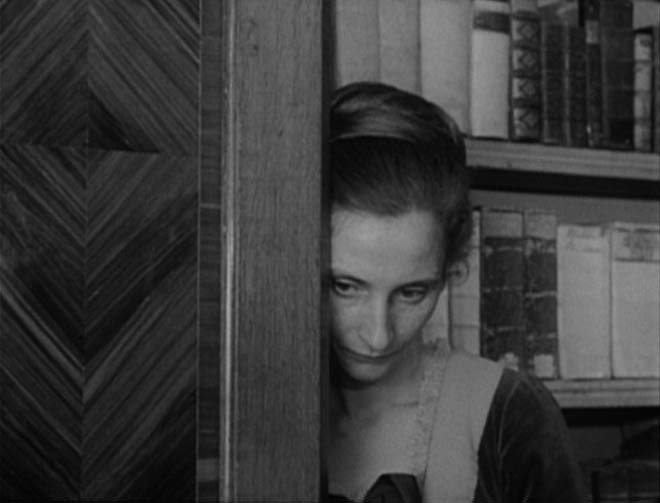 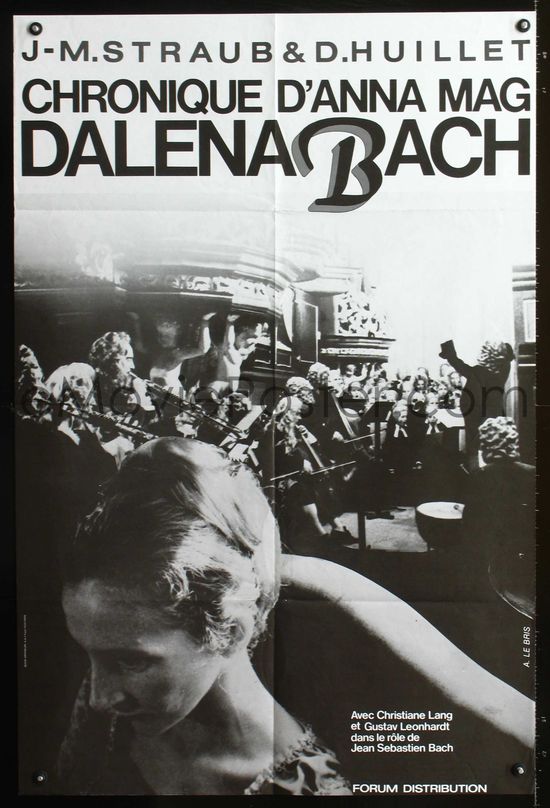 The Chronicle of Anna Magdalena Bach

Written and directed by Danièle Huillet and Jean-Marie Straub

In Nick Pinkerton’s signing off for his review of The Chronicle of Anna Magdalena Bach in Reverse Shot, he wishes “…[it] long may continue to send Matrix-weaned mouth-breathers screaming from film classes, wondering what they’ve gotten themselves into.” It’s the mental image many hardcore cineastes latch onto — of minimalist auteur vision as temporal torture to the modern viewer. The upper echelon is dominated by the sessions of marathoning explorations into time, beginning with many of Warhol’s experiments (Sleep, Empire) and culminating in such recent works as Tarr’s Sátángtangó, Wang Bing’s Tie Xi Qu: West of the Tracks, and most of Lav Diaz’s oeuvre: films that also serve as medals of experience to the cinephiles who grip their seats tightly enough to earn their bragging rights, if we’re to believe a cynical discussion of these films.

What should be obvious is that these films do not earn their quality through aversion to attention-grabbing cues and tropes, nor should their length or pace be seen as subversive filmmaking. Yet there is something about this style of filmmaking, attempted to be labeled as “slow cinema” or “contemporary contemplative cinema,” that attracts academics and alienates the common viewer. I have found myself celebrating this brand of cinephilia as well — my first review for this column, on Liu’s Oxhide II,is a common example. Wading through the list of praised auteurs eventually brings one close to its roots (if they can even be identified), and one will find Straub and Huillet’s modernist pieces, broken away from the larger modernist filmmaking atmosphere of their contemporaries (its première at the 1968 NYFF was shown next to Bresson’s Mouchette and Godard’s Two or Three Things I Know About Her) in favor of an approach more academic, studying others’ artwork at a passive distance. Perhaps the closest comparison would be the stylistic choices of Chantal Akerman, employing the same glacial pace and unobtrusive eye to events more personal, often reverberating easier with a critical crowd, being immortalized for upcoming cinephiles with the inclusion of her Jeanne Dielman in the Criterion Collection. Straub-Huillet have not been quite as lucky, yet their most “accessible” (a word in this context meaning anything from “conventional” to “I-hope-to-God-you’ll-like-it”) work is now present on Netflix streaming in the US. With one of the largest demographics of film consumers now at its disposal, it is now more relevant than ever to discuss The Chronicle of Anna Magdalena Bach.

The narrative, if such a thing exists in this film, is told from the perspective of Bach’s second wife, Anna, documenting in deadpan voiceover the social climbing of her husband until his death, occasionally interspersing with details of their home life (usually accounts of their children’s early deaths). The string of words in a distant dialect of German refer to her husband as a sort of political prodding from the title — how could it be a chronicle of Anna if all the events depicted belong to Sebastian? The monologue is accompanied by panning through Bach’s letters and professional documents as if professing an erudite curiosity about the artifacts on display and their historical or personal tie-ins: we’re effectively waltzing through a museum of music with his wife as the curator. Yet her voice sound abnormally distant from the action, recounting it not as a personal story (and it isn’t hard to blame her given how little presence she has in his life), but as a dry biography. These notes make up little more than a tenth of the film, the majority being a removed static look (and listen) to the performances of Bach in the context of praising a prince, closing a funeral, or complementing a church service. These performances are shot in long takes with an occasional push or pull to concentrate interest onto Gustav Leonhardt, the harpsichordist playing Bach or singer Christiane Lang playing Anne; the performances are often recorded while they’re being filmed and remain as entrancing as listening to Bach ever was — if you’re a die-hard fan of Baroque music, it’s hard to complain.

So why should it be seen by those who are only casual fans of Bach or, granted they even exist, people who may not like classical music at all? Does it not have more in common with the genre of concert film, necessitating that its audience already appreciate the subject matter to engage with it? Sure, but it invites you to actively study the performance and immerse yourself in another’s work. It is a strange task for Straub and Huillet to evoke the presence of music on film and even stranger to present it as a historical artifact, being a guide for another’s art through their medium. Yet they would go even further with their adaptations, later making Moses and Aaron from Schoenberg’s opera, Class Relations from Kafka’s Amerika, and Sicilia! from Elio Vittorini’s Conversations in Sicily. The couple gives the audience a provocation of appreciation for the work of others by standing at the sidelines and watching along with us, often giving us focus or endnotes so we can further fathom what we have been thrown into. What is composed within the shot, however, is Straub and Huillet’s doing — choices of ruminations on the eighteenth-century figures that point toward their need for fiction rather than standard documentary.

The irony of the title is palpable through the voiceover: it is a chronicle, yes, but not of Anna. Rather, it is a chronicle of Sebastian after having married Anna, such that her words be given a personal (while cold) reading instead of the tone of an omniscient biographer. How Anna lives is dictated by how she relates to her husband — she has talent as well, yet is consistently eclipsed by her husband’s growing notoriety. While the shots of Bach’s performance push out to reveal large orchestras and choirs, shots of Anna’s playing are static, framed against blank walls with little to no accompaniment. Straub and Huillet do not actively encourage it, but there is a feminist reading at the heart of the otherwise dry and objective narrative, told only through its images and our external knowledge of discussion concerning feminism and the powerful male figures of history. It is thus engrossed in having a conversation with its viewer, engaging her on an intellectual level through its aesthetic level, adding the “contemplative” to “contemporary contemplative cinema.” 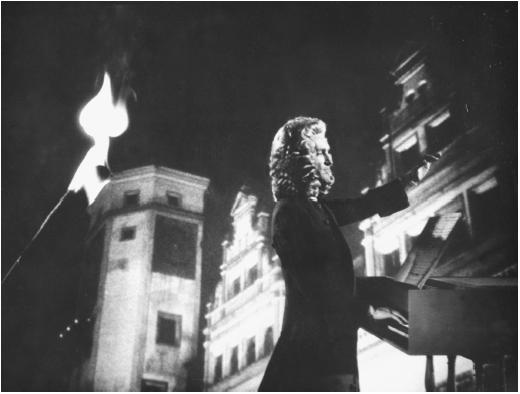 The ambiguity of the definition concerning “slow”, a word offensive to some, and contemporary contemplative cinema continues today, much further than the original complaint in 2010 from Nick James and its responses. Is the slowness of the film really what should group these films together? Is Pedro Costa that similar to Tarr or Weerasethakul or Straub-Huillet? Is this a movement or an aesthetic choice? Are these films inherently “boring” and should that even matter? Or perhaps should we address none of these questions and simply take each part of the slow cinema canon on its own terms as Pauline Kael might suggest? I will not pretend that The Chronicle of Anna Magdalena Bach can answer these questions, nor could perhaps the entire filmography of Straub-Huillet. However, this film was made without much of the context from the canon — it was “breaking new ground” with its pace and distance, meaning Straub and Huillet took this more academic route to fit their aesthetic needs, raise their questions (of feminine narrative), and produce a mood (of airy, solemn concert) they intended. If one were to accuse the later auteurs of merely fitting into a pre-programmed artistic model, it may be necessary to look at them in the context of films that cannot be held to this criticism, whose inspiration comes from more complicated sources. Straub and Huillet’s long takes serve their purpose, showing Bach’s performances in a full context, allowing them to speak for themselves for our aural enthrallment. It is fundamentally different from Tarr’s conflation of drudgery with the mystical, as well as Diaz’s aesthetic capture of time from digital video. The slow cinema canon is disparate, but here to stay as festival trophies and a domination of artistry from the moving image; the conversation must go on.