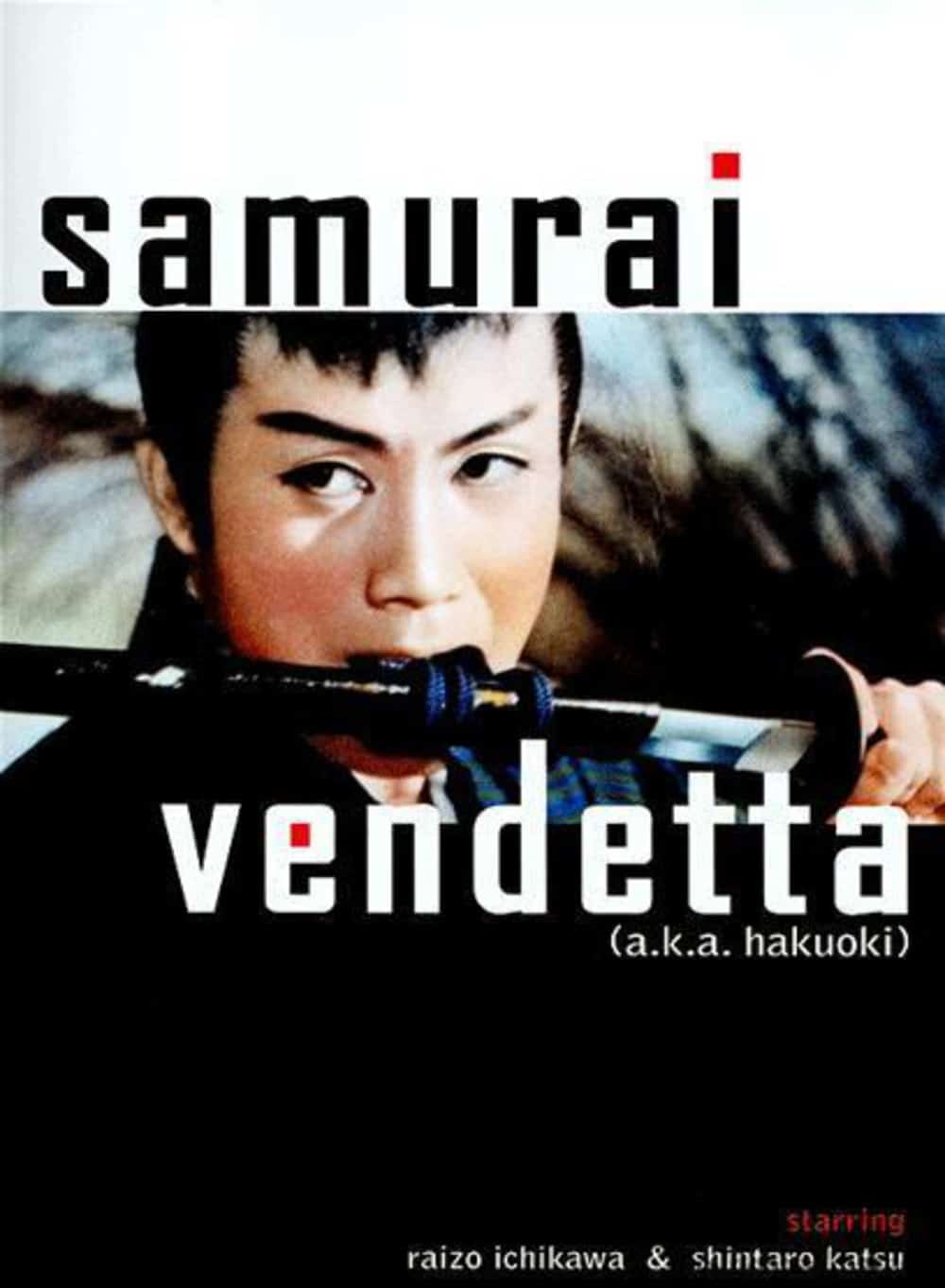 Taking inspiration from the fabled story of the forty-seven ronin in 18th century Japan, Samurai Vendetta in some ways explores the origins of the aforementioned master-less samurai. Beginning before the legendary battalion even exists, the film opens with a bang, as Yasubei Nakayama (Shintaro Katsu), rushes to the aid of fellow students at his school who are being challenged by hot headed rivals of another institution. Yasubei saves the day, but not before crossing Tange Tenzen (Raizo Ichikawa) along the way. Tange is a model pupil of the very school attacking Yasubei’s, yet because he already has pressing matters to attend to, he forsakes the opportunity to defend his classmates. Yasubei’s victory proves short lived however. His participation in the fight and Tange’s refusal to engage in it have them both expelled by their respective senseis, who wish to seek more diplomatic means to easing the tension between their academies. Now ronin (masterless samurai), both will become close, if tenuous allies in a series of serendipitous meetings over the next few months and years, especially when they encounter the woman both fall in love with, tea girl Chiharu (Chitose Maki).

The above synopsis barely skims the surface of the story shared in director Kazuo Mori’s samurai romance epic. In a nutshell, the movie features plot in abundance, almost to its detriment, especially when considering the following two elements. First, action is regularly threatened but only rarely exercised by the leading protagonists. Second, on the occasions when the blades come out to hack through flesh and bone, director Mori and his crew stage brilliant set pieces that make the most of the obviously artificial sets and lighting in order to produce tremendous, emotionally charged battles.

What action is depicted it really is quite excellent, with the violence striking as it so often does in chambara: with grisly grace and precision. Both stars Ichikawa and Katsu (whose stardom would grow exponentially shortly after Samurai Vendetta by playing Zatoichi, the blind swordsman, in 25 films) look capable when wielding their weapons of choice, showcasing how ferociously lethal their characters are when pressed by assailants. The balance between slick movements and forceful violence is beautifully captured, with everyone involved in the production deserving equal credit, not only the two leading men. This is where Samura Vendetta happens to excel in many ways. Whereas a decent amount of scenes appear to be filmed on real occasions, just as many, if not more, are created on sets, sometimes blatantly artificial ones. Ironically enough, it is the very artificiality of the locations, from the highly controlled studio lot lighting to evident matte painting backdrops, that help drive home many of the emotions rushing through the veins of the clashing contestants.

Arguably the best example of this comes relatively early in the picture, when Tange and Yasubei have been expelled from their respective schools. Yasubei has already come to Tange’s aid once before by covering for the fellow ronin after he killed a dog in order to protect Chiharu (it is revealed in an artfully designed non sequitur that dogs are held in incomparably high esteem and are not to be mistreated under any circumstances). Now, a band of vengeful samurai, still reeling from the events that opened the film, attack Tange and Yasubei on a bridge at dusk. The entire ordeal is clearly happening on a stage, yet the colour schemes, in particular the brilliant yellow-orange matte background, makes the fight all the more beautiful to take in. The editing and camerawork are also extremely smooth when warriors engage in combat, further demonstrating that tremendous care and effort were invested in the action sequences.

In fairness, much of the movie looks handsome, director Mori splashing some of the more drama-heavy scenes with artistic flourishes, such as the cold purple hue that suddenly blankets a scene in which Tange suffers a terrible injury that propels the film into the third act. Apart from the action, the film’s strongest element is its artistic vision. The care with which sets are lit, how they are staged, how snow falls and makes an already dire story even more sombre. In the modern era of filmmaking a lot of emphasis is put on keeping things as real as possible. If the filmmakers can go on location to shoot scenes, then they should. The value in making movies look as real as possible should be obvious to most people. Movie goers regularly enjoy films they can relate to, and realistic depictions of worlds facilitate that enjoyment. However, there is something to be said about how clearly and succinctly emotions and story can be related through doing just the complete opposite. Whether by choice or necessity, a lot of Kazup Mori’s Samurai Vendetta exists not in a real Japan, but one created through hard work by a production crew on a soundstage. The results, most of the time, pay rewarding dividends for those engaged in the story.

The key words in the previous sentence are ‘most of the time’. It is true that the film sports an accomplished, bold look, and is anchored by a duo of strong actors that help sell much of the drama and a handful of lovingly crafted sword fights. On the flip side, it is equally difficult to shake off the feeling that the overall movie lacks momentum. The running time is not especially long (1 hour and 49 minutes) yet there are sequences between the battles when the drama slows down the pacing too much. Just when it feels as though the picture is ready to move on to the next beat, Mori slows things down in order to indulge in the drama. Such a technique is always a double-edged sword. A good script and good director can see a film through confidently, regardless of how much deliberate the pacing.

In the case of Samurai Vendetta, the direction and script are culprits for the occasionally sluggish pacing. As previously argued, many of Mori’s efforts are impressive for a whole bevy of reasons, but the script relishes in a bit too much moping and mournful looking away from its characters than the film requires in order to get its points across. Tenge even mentions on a few occasions that he will cut down those that wronged him and Chiharu, but the script keeps putting that off in favour of more drama and even political power playing in the latter stages. Ultimately, the film is less interested in telling a story about the forty-seven ronin than it is in relating the personal trials of one of its founding members. A leaner script and, perhaps, more ruthless decision making on director Moji’s part might have avoided this issue.

The pacing issues do not spoil the entire experience, but it would be remiss to overlook the fact that the movie never reaches the heights it so evidently has its eyes set on in the first act. There is plenty to admire in Samurai Vendetta, only that more patience than expected might be required in order to relish all its treasures.