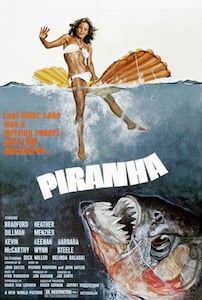 “Piranha is a fun cult classic with lots of blood and a great script.”

Deep down in the big blue abyss so many creatures, known and unknown, lurk. Sharks, barracudas, jelly fish, and other beautiful but deadly fish swim the waters and put caution to taking a dip. Jaws practically had everyone staying on the beach, not yet prepared to go back into the waters. Fear of seeing a big fin in the distance looming closer and not knowing what exactly is underneath chilled movie fans to the bone. And Roger Corman, being the low-budget maverick he is, decided to make sure it wasn’t safe to go back into the water anywhere, and this time it’s not giant lurking terror but a whole school of pint-sized aquatic carnivores in Piranha!

Maggie McKeown (Heather Menzies) is on the job looking for a missing couple. With the help of a local man Paul (Bradford Dillman), Maggie finds evidence that the couple was last present at a restricted military fishery in Lost River, Texas. And unbeknownst to them, after emptying a pool at the military compound, Maggie and Paul have released a genetically engineered school of piranha capable of surviving in cold salt water systems into the rivers running through the Lost River region. Now they must struggle to warn the population before the local people, a kids summer camp, and a lake resort village are turned blood red by the carnivorous piranha headed downstream. 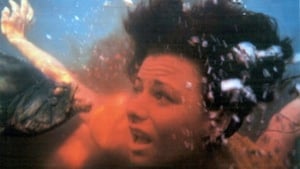 New World Pictures director Joe Dante tackles Piranha with both menace and humour, allowing us to relax and breath in between flowing blood red water. The story is fast moving and intelligent with great characters and a lot of piranha action. Bradford Dillman is great as the rough and tough single father and Heather Menzies is complimentary to him as the strong-headed heroine. Corman regulars Dick Miller and Paul Bartel have small, but hilarious, roles and international starlet Barbara Steele also has a cameo. For a low-budget picture the creature effects are surprisingly creative and effective. Phil Tippet and the rest of the effects crews ferocious fish are quite frightening and will truly make you think twice about getting into the water! Piranha also features some early make-up effects work from Rob Bottin, who eventually went on to legendary special effects status with John Capenter’s The Thing.

Piranha is a fun cult classic with lots of blood and a great script, usually something that doesn’t always go hand in hand, especially in low-budget cinema. Featuring a great score by Pino Donaggio that’s a classic example of a great, subtle orchestral score that stands up with the big boys like Jerry Goldsmith is an unexpected highlight. Piranha will leave you gasping, chuckling, and cheering, and if you didn’t already have a fear of open water from Jaws or if you think you’ve gotten over your open-water phobia, you’ll likely be heavily examining any murky waters from here on in. Because big or small, there are many hungry fish right below your treading feet!