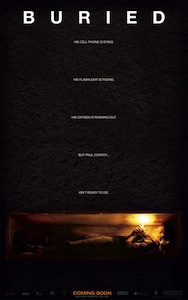 “Buried is a white-knuckled experience that will leave you gasping for air and hoping for survival until the lights in the theatre finally come up.”

We all have our worst fears; being stranded in the middle of the ocean, a plane crash, death by a thousand cuts, and so on. Phobias, paranoia, and nightmares all contribute to a climax of terror that is unique and personal to each one of us, and quite possibly the scariest thing we can each imagine. When filmmakers prey on these fears and we’re daring enough to watch them they can be quite unsettling entertainment, such as Open Water. Trapping an individual (or individuals) in a confined location (or as vast as the ocean) that they cannot escape and where hope of rescue is slim to none is terrifying. Quite difficult to pull off continued suspense in such capacity, director Rodrigo Cortés and writer Chris Sparling invite us into the smallest and most claustrophobic of fears – waking up in a small wooden box buried alive.

Paul Conroy (Ryan Reynolds), an American truck driver working in Iraq, wakes up to total blackness. It’s hard to breath and he has confined movement. Upon igniting a lighter Paul discovers he is buried alive in a coffin, and where exactly he is or whom did this is completely unknown, and fear immediately takes hold. To his shock, a cell phone at the base of the coffin starts vibrating and on the other line he discovers he is being held hostage and will die buried alive if he does not get the kidnappers five million dollars by 9 PM, and that’s only an hour and a half away. Now Paul is running out of oxygen, time, and cell phone battery power as he must figure out a way to let the FBI, his family, or whomever he can get a hold of on the phone, find out where he is and rescue him before it’s too late.

Buried takes a giant cinematic risk and confines the whole film’s running time to one terrifying location – inside the coffin with Paul Conroy. Not once do we leave the claustrophobic space as we are forced to endure the same paralysing terror and frustration as the character. Rodrigo Cortés’ direction is unflinching as he masterfully creates an unending sense of dread where the audience is literally white-knuckled to their seats not moving an inch in their seats, eyes and ears completely locked onto what is going on, for the entire film. Ryan Reynolds, being the only on-screen actor the entire film (aside from a few short clips displayed on the cell phone screen), is heart wrenchingly brilliant and truly makes Paul’s worst fear ours as well, as we are emotionally wrung through fear, terror, sadness, hope, and anxiety. Eduard Grau, quickly becoming a masterful cinematographer who so beautifully painted love and death through the camera in A Single Man, inventively takes us directly into a cinematic coffin we cannot escape for 95 minutes, and so claustrophobically captures the essence of what it must feel like to be buried alive.

Emotionally exhausting, anxiety onsetting, and fear taking hold, Buried is an absolutely perfect showcase of realistic suspense. Ryan Reynolds’ performance is flawless and electrifying and not once do you not believe the situation unfolding onscreen. Cortés and Sparling have created the cinematic equivalent to our worst fears and locked us in that very box. Making the audience endure one character’s inescapable horror for an entire film is a daunting and near-impossible task to pull off, and here the filmmakers successfully nailed it. Buried is a white-knuckled experience that will leave you gasping for air and hoping for survival until the lights in the theatre finally come up.