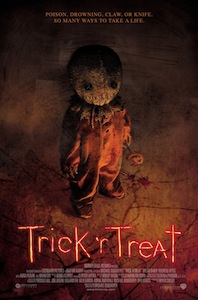 “Trick ‘r Treat is a fantastically frightful and fun horror anthology that is as humorous as it is dark.”

It’s the end of the lighter part of the year and the beginning of the darker half. It’s Samhain! All Hallow’s Eve! Halloween! Ghosts, goblins, and ghouls run amuck going from door to door. Lit pumpkins on doorstops, on fence posts, and behind windows shine bright orange in the night. Skeletons and monsters stand tall in doorways or attached to posts anchored in the ground. It’s everyone’s favourite time of year where a little scare goes a long way and you get to celebrate by donning a grisly costume and partaking in many frightful activities. From bobbing for apples, haunted attractions, and costume parties, Halloween is the only time of the year where being scared is part of the fun. How do you go about capturing the spirit of Halloween on film? The frightful yet playful nature the secular holiday encompasses? Well, you weave a horror anthology of fright and myth in the bright orange and dark black world of Trick ‘r Treat!

It’s Halloween night in Warren Valley, Ohio and all the creatures of the night are in full swing going door to door, dancing in the streets, and scaring the pants off each other. But don’t blow that Jack-O-Latern out before midnight, because Halloween has its rules you must follow! Follow Sam (Quinn Lord), our Halloween mascot, through four interwoven tales of true Halloween scares! Steven (Dylan Baker), a high school principal, has more sinister motives for carving a Jack-O-Latern than one would suspect. And remember, always check your candy! Laurie (Anna Paquin) is a college virgin who, under the pressure of her friends, must find a suitable and willing male to fulfill her desires peaked on this frightful night. Next, a group of kids travel to the old rock quarry to pay their respects to the legend of the school bus massacre, but when a prank goes too far, pumpkins nor candy won’t be an acceptable offering! And finally, a grumpy old man (Brian Cox) gets a visit from a special trick-or-treater who will show him the true meaning of Halloween. Trick or Treat? 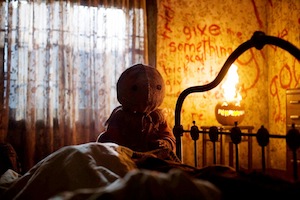 Michael Doughtery successfully captures the look, feel and spirit associated with Halloween. Trick ‘r Treat is a fantastically frightful and fun horror anthology that is as humorous as it is dark. Each tale is interwoven with the next, and previous, to bring the characters and events full circle. No one is safe from breaking the rules as kids and adults alike get knocked off for disobeying Sam’s cautious watch. The ensemble cast is great and the choice to actually have a kid (Quinn Lord) under the Sam costume gives the character an innocence and movement that would never have been achieved if it were an adult in the role. Dylan Baker is especially creepy as the principal with a dark secret in one of the darker stories that feels like Todd Solondz’s directing a Halloween bonfire tale.

Trick ‘r Treat isn’t afraid to get under your skin while simultaneously entertaining. Like a good set of ghost stories told between friends, all the tales in Trick ‘r Treat are guaranteed to give both goosebumps and giggles. With a great cast and a great script full of spooky atmosphere, Michael Doughtery crafts a true Halloween movie that should be mandatory viewing every year on the night of Samhain. Ghosts, goblins, and ghouls abound should find more than their fair share of frightful delight in this horror anthology as Trick ‘r Treat is a bag of Halloween goodies that has already been thoroughly checked and approved. Dig in!