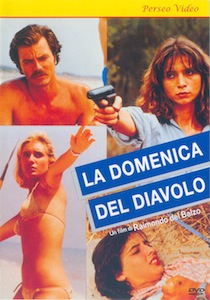 “It could have been an exploitation fan’s dream, but as for what it is, Midnight Blue only belongs in the collections of genre completists.”

When Last House on the Left broke down fences of decency and sexual horror in 1972 no one expected the Italians to turn out rip-off after rip-off of the rape-revenge genre. From Night Train Murders to Last House on the Beach to Terror Express this sleazy and violent genre flooded the European markets and satisfied those looking for ultra-sleazy exploitation. A few of these roughies have been lost to North American audiences and one of these ultra obscure imitations is Raimondo Del Balzo’s Midnight Blue.

Three beautiful female athletes (led by Christiana Borghi) take a weekend off from training to vacation at a relative’s villa complete with private beach. While relaxing, enjoying the water, and topless sunbathing the girls’ weekend alone is interrupted by three escaped criminals on the run. Led by Pierre Luigi (Antonio Cantafora), the three criminals take the girls hostage and submit them to torture and rape before the girls get their bloody revenge. 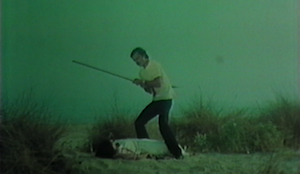 Midnight Blue features all the components you’d expect from the genre; beautiful women, sleazy creeps, and a secluded location, but the film doesn’t pack on the sleaze or violent impact that the other more notable entries exuded in spades. The terror of the hostage taking of the girls doesn’t even happen until the 35-minute mark and prior to that it’s just scenes of the ladies relaxing, some nudity, and a romp with the seemingly good guys. The criminals themselves are never threatening enough and the girls’ terror is limited to a few very short scenes. Even master cinematic composer Stelvio Cipriani’s score is uninspired and repetitive. However, there are a few amusing scenes involving the horrible English dubbing, including a hilarious trip to an outdoor market and two bumbling cops (pretty much a direct homage to Craven’s Last House on the Left) who’s dubbed voices sound like they were rejected extras from the Dukes of Hazzard set which definitely doesn’t fit in with the Italian setting of the film. And you’ve also got to laugh as well when the demise of two of the perpetrators is via javelin!

But those few laughs aside, Midnight Blue is a rather boring and forgettable entry into the rape-revenge genre. A lost revenge classic it sure isn’t so it’s not too much of a pity we haven’t seen an official release of this roughie yet. If Del Balzo had layered on more sleaze, violence, and true terror brought on by the escaped criminals to the unsuspecting female athletes it could have been an exploitation fan’s dream, but as for what it is, Midnight Blue only belongs in the collections of genre completists.