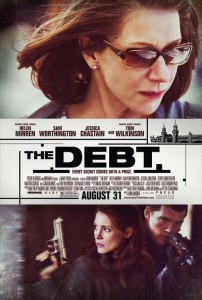 The Debt
Written by Matthew Vaughn, Jane Goldman, and Peter Straughn, based on the film Ha-Hov
Directed by John Madden
USA, 2010

The Nazis are by far the most durable, malleable historical villains in cinematic history. Their status as a universally reviled symbol of xenophobic hatred and cruelty gives filmmakers carte blanche to dispatch them at will, usually in exactly the same way: as fearsome, cunning villains to be defeated by God-fearing heroes – if we exclude the long canon of Nazisploitation genre flicks, that is. (Of the “straight” fare of recent years, Inglourious Basterds took a slightly novel tack on the Nazi-hunt idea through excess brutality and historical divergence, but the only film to have truly muddied these thematic waters as of late has been Paul Verhoeven’s Black Book.) As far as Nazi-hunting thrillers go, John Madden’s The Debt is neither an embarrassment nor a revelation; for a film so eager to misdirect, it feels awfully familiar – and not just because trailers for the film have been omnipresent since before its originally pegged release in the summer of 2010.

In 1966, a trio of photogenic young Mossad operatives assemble in Berlin with a simple goal – to positively identify and kidnap Dieter Vogel (Jesper Christensen), an especially nasty ex-Nazi operating as 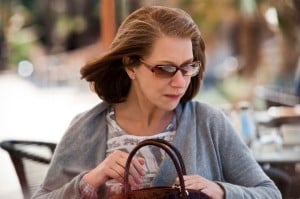 a gynecologist. Vogel’s new line of work necessitates the presence of Rachel (Jessica Chastain), a comely translator with no field experience but plenty of hand-to-hand acumen. Also on the mission and both silently vying for her affections are soft-spoken Aussie David (Sam Worthington) and the decidedly more lascivious Stephon (Martin Csokas). Just over thirty years later, Rachel (now played by Helen Mirren) is being feted as the result of her journalist daughter’s book about the mission. While gloomily taking in the proceedings, she gets word from the now wheelchair-bound Stephon (Tom Wilkinson) of two disturbing pieces of news: first, that the long-since troubled David (Ciarán Hinds) has killed himself; and second, that new information threatens to make a 30-year-old deception clear.

Working from an efficient script co-penned by Kick-Ass writers Matthew Vaughn and Jane Goldman and adapted from the Israeli film Ha-Hov, Madden (Shakespeare In Love, Proof) brings middlebrow anti-flair to a setup that could use a little juicing. The film pivots on an Atonement-like narrative twist that hardly registers as a shock, and the captor-captive relationship between Vogel and the agents will lack novelty for anyone who recalls Ian McKellen in Apt Pupil. The performances are adequate – actually, Worthington fares a little better than usual as the film’s most quietly sympathetic figure – but the agents all feel reducible to a few basic characteristics. When the action shifts to 1997, Madden willingly jettisons the film’s relatively grounded approach, especially in a late-film tussle in which (spoilers herein) an elderly Vogel manages to overpower the much younger Rachel, just for the sake ofthrills – and limp ones at that. (End spoilers.)

Despite that credibility lapse, The Debt should offend absolutely no one, but nor will it resonate with any depth for anyone not specially invested in the subject matter. Madden’s featureless vision, so reliant on a narrative that has nothing new or particularly incisive to offer, is built, as with many of his previous features, for casual, unadventurous moviegoers. That’s hardly a Nazi-level offense, but it’s hardly worthy of commendation, either.