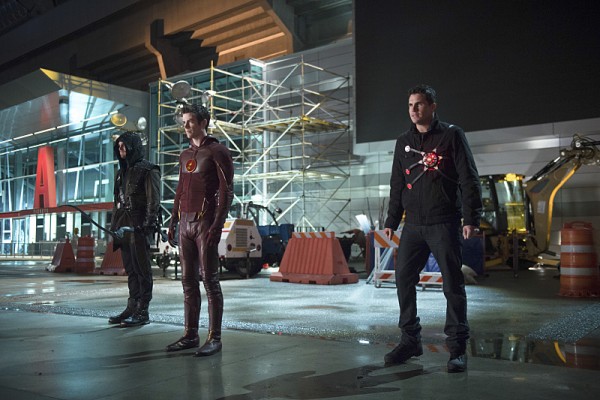 “Rogue Air” opens with Eddie still missing and Barry and the gang searching everywhere, while still trying to unravel Harrison Wells’ plan. As they try to stay one step ahead of whatever the Reverse Flash has planned, Wells reactivates the particle accelerator, putting all of the meta-humans Barry has captured in harm’s way. Not willing to stand by and see that happen, Barry puts together a plan to transport them to another location, but he needs help to make sure they don’t escape in the process. With no one else to turn to, will Barry cut a deal with his enemies to ensure his plan succeeds?

The episode asks Barry an important question: What kind of hero are you going to be? On The Flash’s sister show Arrow, Oliver is the kind of hero who never lets anyone second guess him, and always knows what is right. If that means having a secret black site on an island to house his captured villains, then so be it. He is rich and powerful and always knows what is best. What about Barry Allen, though? He is a cop and works in the system. Barry believes in working within the system of the law, not above it. Is it right for him to lock up the meta-humans he’s caught indefinitely? Barry struggles with that, and with not having a real solution for what to do with the meta-humans, other than keep them contained. Joe even expresses his frustration with the group’s inability to figure out how to rehabilitate their prisoners.

It is unclear what Wells has planned with turning on the accelerator, or even if he cares about the lives of the meta-humans imprisoned inside. All Barry knows is that before he can confront the Reverse Flash, he has to do something. He is faced with a moral quandary, one that really defines who he is, and he tries to formulate a plan so everyone wins. The cops can’t help because what Barry is doing is illegal detention, and his friends are busy with their own affairs on their own TV shows.

He can’t just stand by while people die, no matter how dangerous they are. It makes sense that, when he is left with no other options, Barry would do whatever it takes, even if that means making a deal with someone he can’t trust. Enter Captain Cold, the one person left in Central City that can help. To get that help, Cold’s one demand is the erasure of all his criminal records and identity. Joe, rightfully so, sees this as a step too far. Barry, on the other hand, doesn’t hesitate, breaking into the police station and deleting all traces of Cold from the data-bank. This is Barry’s first major step outside of the system that he trusts, circumventing it so that he can get results quickly.

What makes this uneasy alliance interesting is that Joe recognizes that Barry is acting out of character from the start. Barry is out of his depth, and he knows it. His superhero mentor is gone, and he has to figure things out for himself. That brings him to his only other example of heroism: Oliver Queen. Ollie gets the job done by being prepared for every scenario. That’s the kind of hero that Barry wants to emulate, someone who can turn his enemies into allies when needed.

It comes as no surprise when Cold sabotages the truck and lets the villains escape. Cold had everyone in his pocket, including Barry. Barry should’ve seen it coming, all the warning signs were there that he’d be betrayed. He wanted to believe he could handle it, like Oliver would’ve been able to. It’s the sad realization that he, like the show as a whole, can’t be like the Arrow. 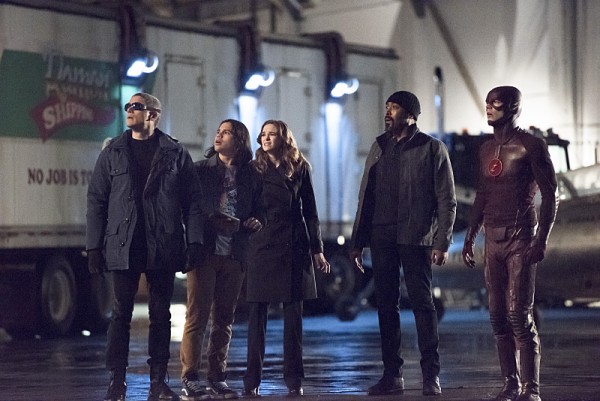 The final act of business comes, oddly, after the resolution of the escaped villains and the examination of what lengths Barry is willing to go to in order to keep people alive. The accelerator is charged up and ready to go, and that means that Eobard is coming back to finish whatever his plan is. While the team hasn’t pointed it out yet, it is clear to the audience from the get-go that the end game for Eobard is returning to his timeline. What he has done, both to support and oppose Barry, is a means to that end. It is reasonable to assume that the particle accelerator responsible for creating this new world would be the key to achieving his extended time-travel.

Barry takes on Reverse Flash as Arrow and Firestorm finally show up, but not before Wells pulls off one truly amazing moment of geeky glee. Many movie studios and creators feel almost ashamed to acknowledge and bask in the truly ridiculous nature of comic books, compensating by making costumes more real-world appropriate, or mocking the more ridiculous superhero names. With that in mind, Eobard has a Flash costume ring. For those who are only familiar with Flash via the TV show, the ring contains a shrinkable version of Flash’s costume, as well as that of the Reverse Flash, who copied the tech and ring idea from his nemesis. At the push of a button, this ring ejects the costume, ready to wear. It was introduced in a time where heroes needed to make a quick change, like Superman in his phone booths and Batman with his conveniently placed entrances to his Batcave.

There is a reason to focus on this one seemingly minor nod to the Flash fans in bringing such a silly concept to life, and it has to do with the tone of the show. As a TV show, The Flash is unashamed to be adapted from a comic book. It has no issue with putting costumes in rings, pitting Barry against a gorilla, or letting Cisco be Cisco. It feels like a rejection of the super-serious “adult” fares that comic adaptions seem to be turning into these days.

The drama side of The Flash is kept to a minimum in “Rogue Air”, with only a few cutaways to Iris and Eddie dealing with his recent revelations. Iris is committed to making things work with Eddie, defiant of the timeline shown to Eddie. She refuses to let things play out without challenging them. Eddie, however, lacks her resolve. Eobard broke him with his psychological warfare, making Eddie out to be the failure of the family, to be a footnote in the Flash’s legacy. He wants out, despite the pain it is causing him. If the show is building toward Eddie as Flash’s rival, the groundwork is being set, and he is on course to be a future antagonist for Barry and Iris.

The Flash readies itself for a grand finale to cap what is a really great first season. In a short amount of time, this show has established itself as a goofy and campy series that is always building towards something bigger and better. It is unlikely that Reverse Flash let himself be defeated that easily. He has stayed a thousand steps ahead of Barry so far, and he probably still is. Barry is still figuring out who the Flash is and what defines him as a hero. Is he willing to alter history, or should he accept the way the world is, and try to make it a better place? Find out next week.