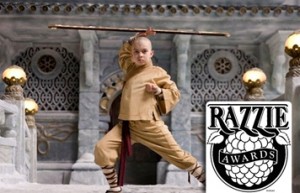 A while back, while sitting in a theater before my movie started, a preview came on for The Last Airbender. Nobody knew what it was yet, and the dramatic narration, outrageous C.G.I. and intense martial arts moves made everyone raise their eyebrows like, “what the hell is this?” Then, M. Night Shyamalan’s name flashed up on the screen and, I kid you not, the entire audience broke out into laughter.

Poor M. Night can’t catch a break. Last night, the 2011 Rasberry (Razzie) awards were announced and Mr. Shyamalan was the unwitting recipient of the most Razzie awards this year including Worst Director, Worst Picture and even this year’s new category, Worst Eye-Gouging Mis-Use of 3-D. This is the first picture Shyamalan has directed where he didn’t also come up with the concept and story himself. This new approach to movie-making didn’t save him from the across-the-board criticism that has plagued basically every movie he has made after The Sixth Sense.

Following is the official press release. But first, enjoy this old school clip of Halle Berry accepting a Razzie for her role as Cat Woman in which she thanks Warner Bro’s for putting her in a “piece of shit god-awful movie.”

Voting members of The Golden Raspberry Award Foundation have sifted through the cinematic rubble of last year’s Berry Worst Achievements in Film, and come up with the “winners” for The 31st Annual RAZZIE® Awards. Results are announced in satirical ceremonies held at Hollywood’s Barnsdall Gallery Theatre at 7:30pm PST on Saturday, February 26, 2011 — the now traditional Night Before the Oscars®.

Not quite sweeping the ceremony, but still handily leading the pack among this year’s RAZZIE choices is RAZZIE Repeat Offender M. Night Shyamalan’s “re-imagining” of the faux-anime’ TV series The Last Airbendender into a jumbled, jump-cut mess of a movie that fans of the TV show hated even more than critics did (if that’s even possible!). In addition to Worst Director and Worst Picture, Airbender also “won” Worst Screenplay, a brand-new RAZZIE category for 2010, Worst Eye-Gouging Mis-Use of 3-D, and Worst Supporting Actor Jackson Rathbone (who had the misfortune to appear in both Airbender and 2010’s other most-RAZZIE-nominated title, Twilight Saga: Eclipse).

The other big “winner” (if that’s the right term when speaking of these awards) was the bling-obsessed superslick chick flick Sex & The City 2, which took gold-spray-painted statuettes for Worst Sequel, Worst Screen Ensemble (for its entire cast) and Worst Actress (presented jointly to the film’s four principles, Sarah Jessica Parker, Kim Cattrall, Cynthia Nixon and Kristen Davis).

Rounding out the field of this year’s sorriest cinematic losers were King of the Twittering Twits Ashton Kutcher as Worst Actor for both Killers and Valentine’s Day, and Jessica Alba, finally “winning” a RAZZIE with her fifth nomination. Alba was named Worst Supporting Actress for her “performances” in four films, The Killer Inside Me, Little Fockers, Machete and Valentine’s Day.